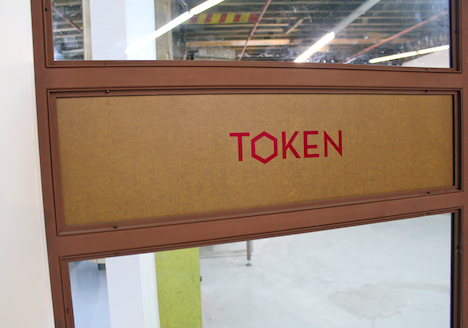 TOKEN's founder's Emrys Berkower and Will Kavesh have a massive workshop on the ground floor of an old factory on the water in Red Hook, Brooklyn where they're set up to work with glass, metal and wood. They can draw up plans for a chair, for example, and walk into the next room to build it. In other words, it's a furniture maker's dream. A few weeks ago they were nice enough to set some time aside from their busy preparations for ICFF to talk about how they grew their studio, what they're working on now and what makes a good 'hangover chair.' Scroll through all the photos below to see a sneak peek of the new pieces they'll be exhibiting this weekend. 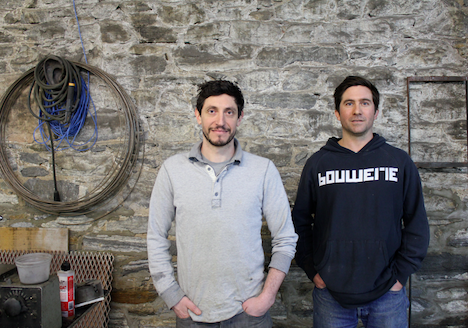 Origins After Will and Emrys met at Alfred University in the mid 90s, they moved to New York where Emrys settled into the glass blowing community and Will began building furniture for Rogan. When Will needed some help he'd call up Emrys, and the two worked like this, collaborating on lighting and furniture projects until they decided to strike out on their own. They continue to handle Rogan's Objects line, but after doing custom design-build jobs, beginning with their first gig converting an NYU classroom, they needed their own space and so they made the move out to a spacious studio in Red Hook. 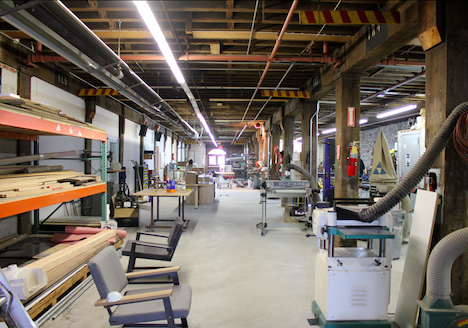 Even though custom jobs for clients took up most of their time, their goal was always to start their own line of furniture. "After two years of prototyping we finally just said, we're not going to do it unless we just start making it ourselves and building it," said Emrys. That was in 2009, when they officially began the TOKENnyc product line.

They still take on design-build jobs because, as Emrys explained, "Those custom projects are challenging and inform your own work because you're problem solving and coming up with different production or manufacturing systems to build something." "It's like still being in school, in a way," Will added.

Ethos Will and Emrys describe their designs as promoting purposeful and considered living. "It's about living with objects that have a real task in mind," said Will. "TOKEN would never design a really super fluffy down chair or couch that you want to be inside of when you're recovering from a hangover - we would never design something like that." "Although," Emrys is quick to add, "there's a place in the world for that. But that's not what we want to promote. We would promote something that's more active and engaged." 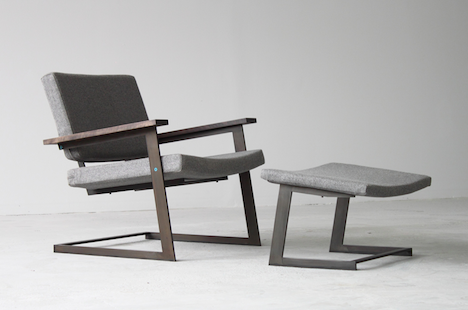 Take, for example, the TOKEN Lounge Chair. "If you sit in that chair it's definitely a relaxed pose," said Emrys. "It's definitely a comfortable chair, but you don't want to curl up and watch a movie in that chair. You feel a relaxed engagement. You might want to read a book and not fall asleep reading it." That very purposeful aesthetic is evident in all aspects of their work, right down to the joints, which Will describes using the the industry term "work holding, a structural solution that would be used while making something, but we've adopted that vocabulary." 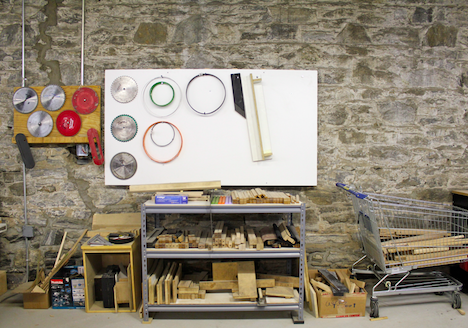 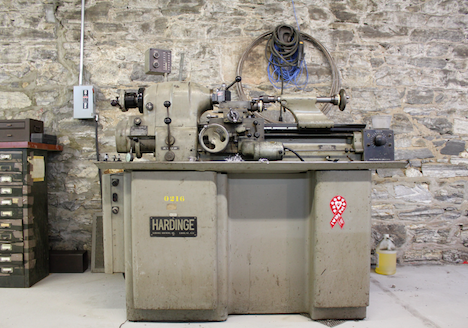 Process "Will is responsible, more often than not, for the initial structure and the way something is put together—the way the arm meets the leg. Will is a very good engineer and understands the materials' dynamics," Emrys said of their collaborative process. Most of their products begin with one of Will's drawings, which they then "pick apart, considering the weight, material costs. Can the joint actually work? Can it be less bulky or bigger?Then we distill that all down," Emrys said. "Will is very ambitious and will build the first thing he draws. He'll just come in on a weekend and build it." And having a full-scale chair to work from is a huge advantage over working off a model. 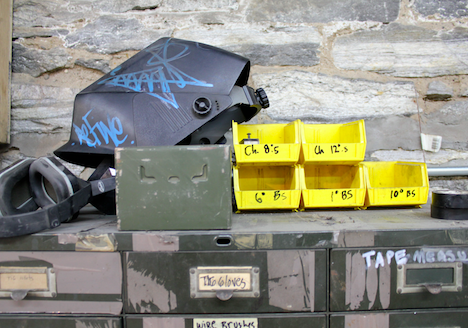 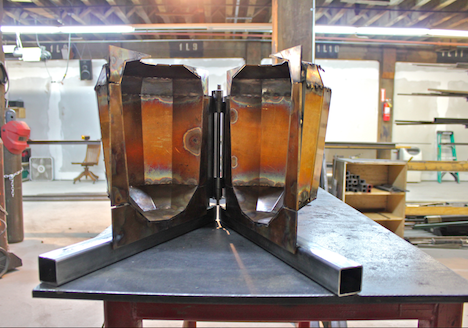 Projects Once they have working model, Emrys and Will spend a considerable amount of time tweaking, creating up to twenty iterations in the case of their new Catenery collection. "We have to see how it behaves over time, what it looks like after it's been sat in for two months," said Will. "We're not Ikea or Vitra or these large companies that have a robot that will sit in the chair 500,000 times." 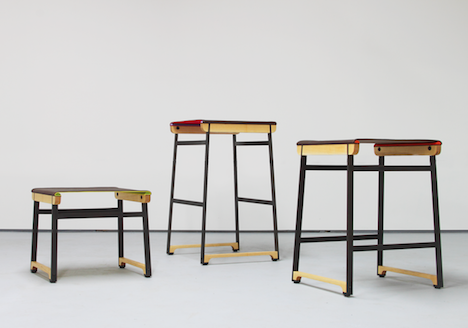 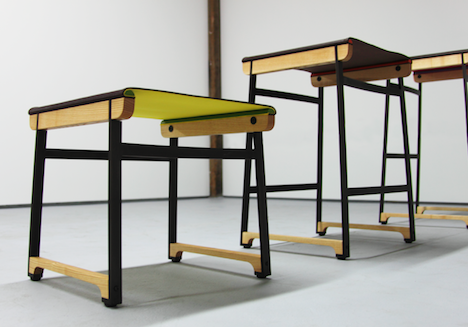 Still, the process of designing and building the Catenery collection was something of a breakthrough, and in the end they figured out a system that they can now apply to other designs. "But just think," Emrys said, "it took two and a half years to get to here. Now I think we'll be able to grow off this construction and aesthetic."

After having sat in one of Catenery's many iterations, I can attest not only to the beauty but comfort of the leather seat, made from the hides of American bison. It's purposeful, functional and finely crafted with surprising and delightful design details, like the contrasting colored fabric under the seat. 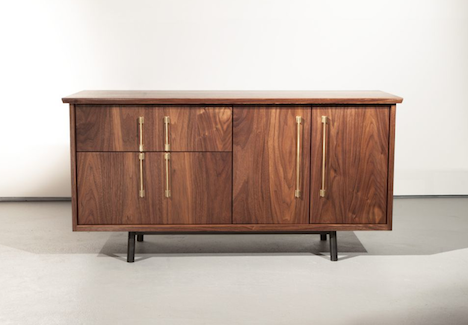 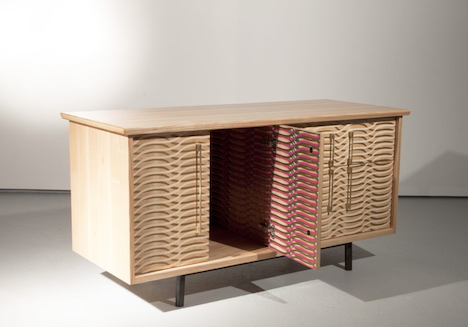 The other exciting new product TOKEN will unveil at ICFF is their Sideboard Collection, some of which are lined with custom designs by Flat Vernacular, a Brooklyn-based wallpaper designer and manufacturer. 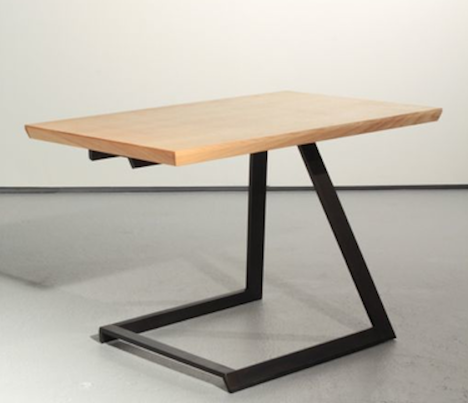 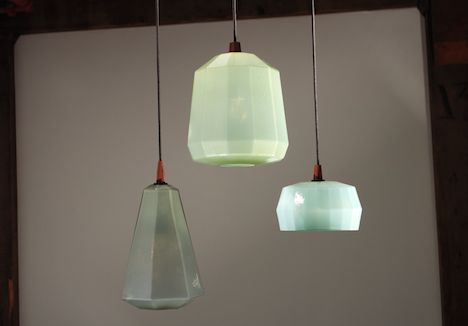 The Morrison Side Table recalls the angular aesthetic of the Lounge Chair, and Emrys rounds out the line-up with his gorgeous handblown Poly Pop pendant lamps made from partially recycled glass.

Future Projects In order to ramp up production of their furniture line, Will and Emrys have a three year plan that includes a West Coast operation. They're also looking to outsource some of their custom design-build projects to an American manufacturer in order to take on larger contracts. Still, they plan on adding another designer and a few more builders to keep 80% of the production in-house.

They want to grow, but they're careful about how that happens. Will draws a comparison to Dunes, a furniture designer and manufacturer that started out small like TOKEN but has grown exponentially over the last ten years. "Our three year plan doesn't look anything like what Dunes' did a decade ago. I don't have any interest in doing that. I admire what happened for them—it's amazing—but this is about craftsman quality furniture that has a bit of a different design twist."

Be sure to check out their booth at ICFF this weekend.