The British are coming! Tom Dixon continues his global takeover with the launch of London Underground, an independent satellite event staged during NY Design Week/ICFF. Held in the basement of the Bleeker Street Theater, the show will debut the Luminosity lighting collection in the United States as well as host a special off-line Fab.com x Tom Dixon pop-up store. In addition, visitors can grab a cup of Stumptown Coffee or check out Surface Magazine's retro-'60s inspired broadcasting station.

Core77 had an opportunity to chat with the trailblazing designer about being a Brit in New York during Design Week, the future of manufacturing and his opinions on light, love and rock 'n' roll.

Core77: We're counting down tonight's kickoff of 2012's New York Design Week. A lot of European designers skip over New York after the madness of Milan. As a designer who has had a consistent presence at ICFF and New York Design Week, why is it important for you to be here every year?

Tom Dixon: Well, we've always thought it was an interesting market and we like hanging out in New York anyway. We decided several years ago to invest in the United States properly. We've been taking baby steps to get the infrastructure in place—having a little office there, a partnership with the warehouse and taking it seriously. A lot of people just think that because I speak English they can just go to New York and sell things and people will understand. For anybody who's ever been in, I dunno, rock and roll—you've got to tour. You've got to be there. You've got to invest and spend time.

You've got to be consistent in your presence, otherwise, America just doesn't happen. So, we made a decision and we're pleased we did because people seem to like what we're doing. It feels just like a beginning of something a bit bigger. We also think that the United States has been quite conservative for a long time. We thought it was time to breathe a bit of fresh air.

We're definitely seeing more and more of your work here in the United States. In fact, this week you launched a pop-up store with Fab.com both online and in a physical pop-up at the London Underground exhibition.

America is so good at defining new business models. I think it's the same thing with the furniture industry worldwide—it has been very acting very conventionally. It's only really Ikea that does things in a really different manner. It is really interesting to see how fast and how quickly Fab.com is gaining traction and how it really challenges the way you distribute things. Things just went online this week so we don't know what the results are yet, but it's kind of fascinating to see that there are a million people over there that are interested in design in a slightly different way. 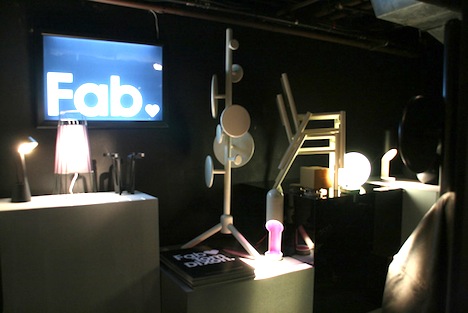 That brings us to your current collection, Luminosity. One of the things that I really enjoyed was the way that you're really playing with transparency and the process of actually creating these pieces. What were some of the design considerations you were thinking about when crafting this new collection?

It's still a really fantastic field in lighting at the moment because it's something which really is evolving and changing rapidly—through government legislation, technical development and more efficient ways of lighting things. People feel slightly nervous about using these new lighting technologies. I mean, everybody is much more comfortable with the incandescent bulb—you know what 100 watts does and you know that you're going to like the light quality. We owe it to our clientele and to ourselves to know a bit more about what these things do and what kind of shapes are going to go around in lighting sources in the next few years because that's our future as well. The idea of showing in the basement is also trying to say, "Look at these things and look how they light spaces" rather than to look at the object itself.

I love the Etch collection, the idea of playing with light and shadow. It's not just about this full on lighting experience, but about creating a certain ambiance with the light.

We've also had an interior design business and it's taught us a lot about the limitations of lights on the market and how you create moods because we've had to live with our lighting objects ourselves now. It teaches us a lot about what we need and what's missing from the market. If I was just designing a lamp fixture for my own in the studio I might not be thinking so much about the architecture and the actual interior design of the light fixtures themselves. 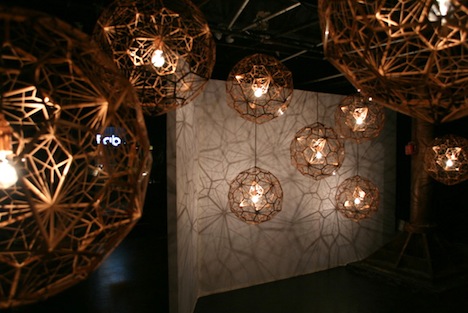 And why now? This is a precarious time for a lot of businesses. It's quite bold to go out on a limb.

I hope I haven't bigged it up too much as being some extraordinary, massive event. I mean, it's a tiny theater in NoHo...I'm a bit worried I made it sound too confident. It's very difficult in a proper trade show to have any personality. People have to abide by rules. You can't serve your own coffee. You can't play your own music. You can't run ambient lighting. Although it feels a bit safe and a bit more comfortable to show in the trade show because you're guaranteed visitors, the reality is that if we want to have any personality at all we've got to break out of that and do something ourselves.

That part of New York feels really fresh and it's moving rapidly. We were lucky to see last year the little theater on Bleeker Street that we fell in love with and discover the basement we could use. It's perfectly situated to Luminosity, which is the title of the show, because it's complete blackout down there, you know. So, there's something quite nice about it being really small, personal and hidden in that way. I think it gives us an opportunity to show the lights in a slightly more appropriate setting.

Do you find that other designers feel similarly about the large trade shows?

I don't know. I mean, it's a difficult equation in the end. For smaller, younger brands you don't have an option, you normally can't afford a trade show. You might do something peripherally. That's how I started. I think it's odd how companies want to cluster themselves in that tradeshow dynamic. You see it with the showrooms as well. The showrooms are lifeless objects anyway. Often they don't even let the public in and often they are wearing suits and ties and you have to press on the bell to get in.

So we made a conscious decision a long time ago to believe that whether they're architects or retail customers, they will want to have something more joyful and more interesting presented to them. Maybe they want to see other people's brands and not just your own brand. Maybe they want to have some food. Maybe they want to be inspired by things which they didn't just come to buy. Whatever happens in the lines between work and play are blurred. I think the business has been becoming increasingly something which is also about entertainment rather than just the serious specifying of objects for architectural projects. You can be professional and enjoy it.

What we're getting at is you don't have to be in a tradeshow environment. Even the tradeshows have to loosen up a bit just to maintain their position. So, there is a blurring of lines. Anybody worth their salt would be constantly thinking of new ways to explain and present the product—you can get so self-referential and boring. In the modern world, people get bored so quickly. Luckily, I get more bored more quickly than anybody else.

At Core77, we love the way that your presentations pull back the curtain on the design and manufacturing process. In 2008 we saw your installation in London you were showing how chairs were built and upholstered. Then the Flash Factory from 2010 with assembling digitally manufactured objects. Even the industrial machines that you had installed at Most blur the lines between exhibition and entertainment. But at the core, they're definitely education efforts. Why is educating the public important for you as a designer?

It's not just the public. It's also professional-to-professional. My observation has always been that people are so divorced from the bits that I see and enjoy. I've always drawn the most inspiration from the tools and machines of how things are made. Given that I started off that way myself—in the end, it's just what I like. But there's no secret to the fact that everything is made in China or the Far East. People have lost contact with how things are made. It doesn't matter where you look—whether it's in the food industries where people are starting to think, "Well, I want to know how my bread is made." You want to know what your provenance is in a way.

I've been doing that kind of performance for much longer than that—with the plastic extrusion maybe 12 years ago in the windows of the shop. It's more than just educating. It was more about trying to do what we talked about before, which is try to smash existing business models and think it possible to do things in a different way. The idea was also trying to work out how we can go direct from the machine to the consumer and trying to go one beyond Ikea. They've managed to knock out the retail shop and bring the public to the warehouse. So, it must be clever to bring the factory to the public. The test in Milan and the test with Fresh Fat Plastic was whether you can make things to order for people in the way that you might have done in the medieval high street—you go and you order something and they make it for you while you wait. You know, your suit of armour. I think that freshness of action is something that's become modern again and has become possible again through miniaturization, digitalization and machinery. In the context of modern America, one of the big geopolitical stories is the loss of manufacturing in the United States. The way that people have been so dispossessed of their own future but they still continue to buy low-cost Chinese goods not realizing the connection in a way. For me it's about everybody, whether designers or consumers, taking things back into their own hands and saying, "Well, you know, we can make things ourselves...There's no point in waiting for trade barriers to come down." And America is leading the charge in terms of the software and the machinery that make these certain things possible. It might look like an impossible dream at the moment, but it's coming. The bigger lesson, which is beyond design or consumption, is about how the world makes things and consumes things which effects everybody.