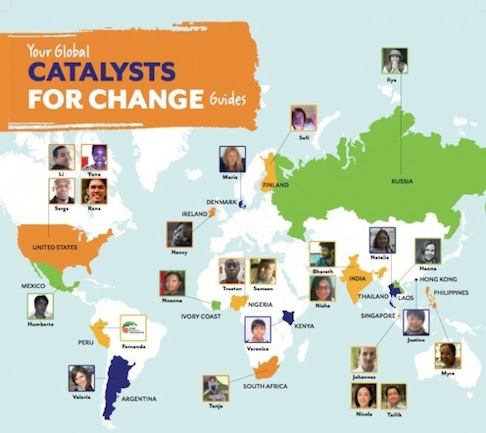 A map of the global game guides who helped manage the Catalysts For Change game during its 48 hour run.

It seems like we're playing video games every day. Every morning and evening on the subway, I see people swiping their phones, whether they're slinging a red bird into a pile of green pigs, guessing a friend's drawing, or any number of fun, frivolous, addictive activities. That's a lot of time spent on games, and a lot of cognitive energy. What if all of that brain power could be put toward social issues, like finding a way out of poverty?

Catalysts for Change, a game initiative put out this past April by the Institute for the Future, is an attempt to do just that. It ran off their popular Foresight Engine, a game platform originally designed by Jane McGonigal to drive insights and innovation through an aggregate of hundreds of mini, 140-character forecasts structured in a fast-paced card game.

And with a broad global reach, they were able to bring in global game guides, i.e., regional game managers, who helped them reach 79 countries and 1,600 players speaking English, Spanish, French or Chinese. These game guides played a crucial role as cultural bridges to the broad audience far from Palo Alto. Most were found through IFTF's broad reach of contacts. In one instance, an aspiring game developer in Mexico City reached out via Twitter, as he saw an opportunity to refine his skills in a city with limited opportunities for learning about games.

I sat down with Tessa Finlev, the official gamemaster of Catalysts for Change. Their goal for the 48-hour burst was to answer a difficult question: how to find new paths out of poverty.

Core77: From the numbers, it sounds like the game went very well.

Tessa Finlev: I think it went really well. Catalysts for Change garnered over 18,000 cards in 48 hours—[double] the previous record for a Foresight Engine game (Magnetic South), in which just under 9,000 cards for a game played in Christchurch, New Zealand after their earthquake last year.

It's important to mention that while our reach was wide and very global, an online forum is, of course, limited to people who can access the Internet and are savvy enough to navigate the Foresight Engine platform—which is designed to be very lightweight and easy to jump right into, but still requires some experience using the web. Our next step is to find new ways to break down these barriers even further.

C77: What sorts of games and gamification models were implemented in building this site?

In order to gamify the Foresight Engine, we implement a basic scoring structure. When you sign up you get some points; when you play a new card, you get points; and as people build on your cards you get even more points. The focus is on building collaboration, so the majority of the points are gained when players begin to build on each others' cards.

Foresight Engine games also tend to go hand-in-hand with player awards, which are given to players for the most innovative ideas. Although the awards do not come with points, they reward the desire to be recognized in front of your community for being innovative and creative in your thinking. The awards are not built into the site itself, and require game guides to find the right players and ideas to receive these awards.

The process was particularly daunting for the Catalysts for Change game due to such a large amount of cards that were played in such a short period. Many of the global game guides suggested that we find a way to have the game automatically award players with basic algorithms. However, this becomes increasingly difficult since the themes of the awards change for every game. In the end, it might mean that next time we run a game with global game guides that we need to focus on adding in more training around the process of awarding players. 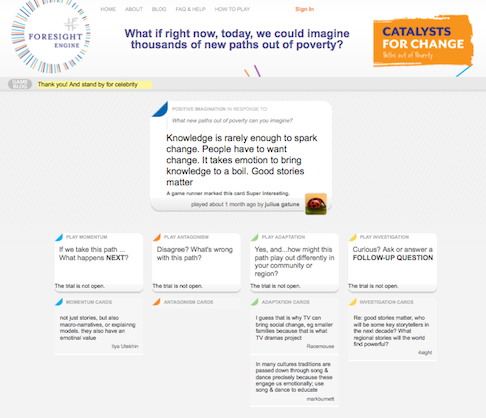 A screen capture of a proposed solution and its many responses shows the quick, card-based nature of the game.

Some games, like Angry Birds, are easy to understand, while others, like Civilization, have a much steeper learning curve, yet both are incredibly addictive. Did users understand the concept immediately or did it take some guidance?

The actual game mechanics of Foresight Engine games are so straightforward that people tend to get it very quickly, and then find themselves getting sucked in for hours. On some level, we are all addicted to broadcasting our own ideas and getting feedback on them (particularly if we can do it anonymously), and this is the basis of a Foresight Engine game.

The games also force people to think more deeply and critically about an issue than they may otherwise tend to do, which also adds to the addictive nature of the game. Our game guides have the ability to mark cards as "super interesting" or "common knowledge" as appropriate, and I've been told from players that when their card was marked as common knowledge, they realized they had to start thinking on a different level.

There are certainly aspects of the game that can be improved to streamline the productiveness of the experience. For starters, there isn't a clear way to connect one chain of cards or ideas with another one that might be relevant, which means that collaboration sometimes ends up happening in silos. In the same vein, many players—particularly in Catalysts for Change, when we had over 18,000 cards played in 48 hours—can get overwhelmed with the pace of cards being played and find it hard to enter into the conversation. 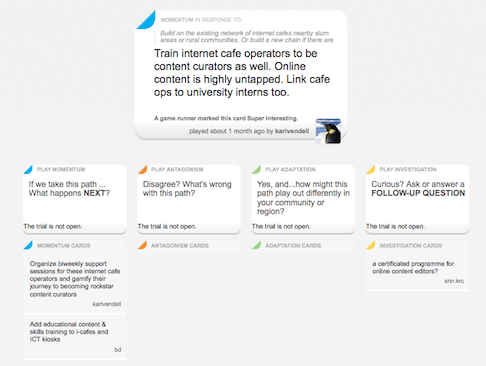 Another thread focused on a different solution: working with internet cafe operators.

What motivated people the most? Were the awards a critical factor, or were participants more interested in generating ideas that got a lot of responses?

The awards may have added some motivation, but we didn't advertise them very much—they certainly aren't the focal point of the game, and if anything, the awards just add an interesting element towards the end of gameplay. Mostly they act as another source of feedback for players who excelled in their thinking, and to build a sense of community and excitement over the work that has been done.

I hope the potential to share your ideas with other interested parties from around the world was a main motivating factor. Now that technology allows us the ability to interact with people from all around the world—people who wouldn't have had a chance to talk 20 years ago—and this holds tremendous potential for creating real change that we haven't had access to until fairly recently.

C77: What's going to happen now with all the great discussions and ideas?

There is a player-created Facebook group where players are getting together and talking about the ideas from the game, and working on bringing some of them to fruition. We are also in the process unrolling celebrity awards, but at IFTF our interest in running Foresight Engines is really about spreading futures thinking literacy, or creating Citizens of the Futures, as we say. As part of our mission, we are interested in changing the way people think about the world and their place in it. So for us, the important part of running the Catalysts for Change game is the game itself. 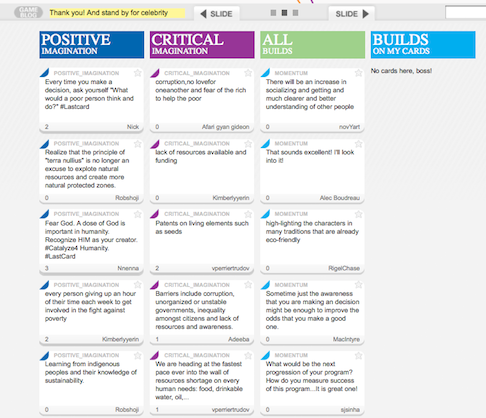 A screenshot of the internal dashboard that players see while playing the game.

The Foresight Engine platform is a way for us to move away from the traditional idea of expert roles, into utilizing the wisdom of the crowd. When it comes to issues of social change and the future, there really aren't experts in the same way that we think of experts in, say, brain surgery. In fact, we can look to the past 70+ years as evidence that the traditional top-down 'expert knows best' methodology for purposes of social change and international development have not worked. We can even argue that in many cases, this approach has damaged local communities.

From my experience in the Peace Corps in Kenya, I saw a nation and entire generations who have been taught to believe that they themselves do not have the ability or skill to make their own changes. Similar cases are widely documented through the Dependency Theory of economic development.

Of course, as I touched on earlier, we are not all the way there yet. As an online game, we're still not able to reach the bottom billion—realistically, we've just tapped into the bottom 4 billion. Nevertheless, we're continually getting a more multifaceted, nuanced and complex view of the challenges involved in creating real positive social change.