Idealistic Urban Design: Streetside Charging Points and a City in the Sky 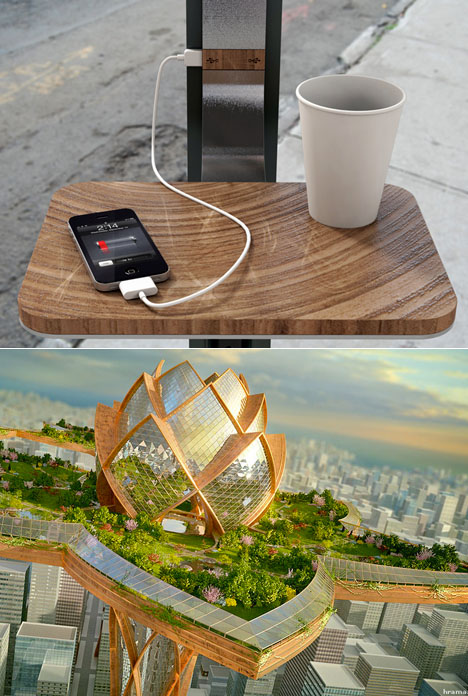 Two ideas for things we'll probably never see, but which would be nice if they could actually be realized.

The first is Brooklyn-based Pensa Design's Street Charge, which would be so useful that I can't ever see the City of New York agreeing to install them. The concept is to use existing street signage to hold self-sufficient, solar-powered USB chargers, conferring on citizens the ability to juice up their phones on the fly.

If installed I think they would be mobbed, but I also think that wooden shelf or bench would be awash in discarded coffee cups, half-eaten pizzas and less pleasant things in no time.

The second is an urban oasis concept called City in the Sky that makes NYC's High Line look like a subway station. Done as a collaboration between Dimitar Karanikolov, Nedialko Nedyalkov, Kamen Sirashki, Svilen Belberov, Nikolay Salutski and Miroslav Radoev, it's so beautifully wistful that I don't feel like going outside and facing the chewing-gum-encrusted reality that is New York City today.

Idealistic Urban Design: Streetside Charging Points and a City in the Sky