How Do They Change Stadiums from Hockey Rinks to Basketball Courts--in 90 Minutes? And Move an Entire Football Field?

That process is not unique; virtually every city with a stadium and teams from different leagues performs this routine, with transformation times (depending on crew size and efficiency) ranging from a blistering 90 minutes to a full day. The question is, how do they go from ice to parquet and back again? This video of the Verizon Center in Washington, DC being transformed provides a better view:

As you can see, it is the ice that stays on the bottom. Underneath that is a concrete floor embedded with temperature control mechanisms—the ice is not melted off, it remains frozen for the duration. When it comes time to switch to basketball, workers lay interlocking mats made from rubber or a fiberglass-foam composite over the ice. (Photos below from Boston's TD Garden.) 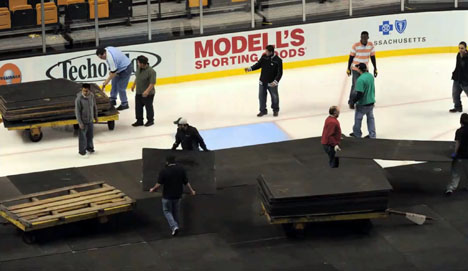 On top of that they lay deck boards topped with basketball-ready parquet. 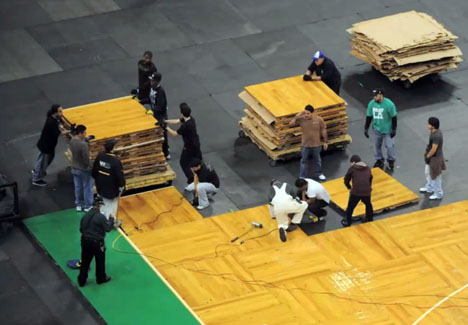 "The [basketball] court is a large puzzle—made up of 285 wooden pieces, each weighing 186 pounds, totaling 26.5 tons," says a Denver newspaper article describing their arena's process, which is similar if not identical across the country. "It must be placed to perfection, in a stair step pattern, with all the lines in place. Each of the pieces takes four people to lock in, and then the crew uses a sledgehammer to tighten it."

Prior to the invention of this system, of course, basketball players were simply forced to play on hockey rinks. This resulted in many career-ending injuries per game, cases of frostbite, and atrocious final scores like 0-2.

As impressive a feat of engineering the rink-to-court transformation is, it is dwarfed by the scale of systems like the one in place at the University of Phoenix Stadium, which features an entire football field that slides in and out of the stadium on an enormous tray. The grass needs sunlight to grow, and it was actually cheaper to engineer a massive moving platform rather than constantly open and close the stadium's motorized roof.

Before our overseas readers point to this stadium as a sign of American excess, we should point out that this moving field system was actually pioneered in Europe and Asia.

Lastly we'll point out: In the video it appears the field moves by means of a motorized track, but Core77 has learned the stadium is actually powered by University of Phoenix freshmen, who populate individual compartments beneath the field and crawl forward in unison.

How Do They Change Stadiums from Hockey Rinks to Basketball Courts--in 90 Minutes? And Move an Entire Football Field?