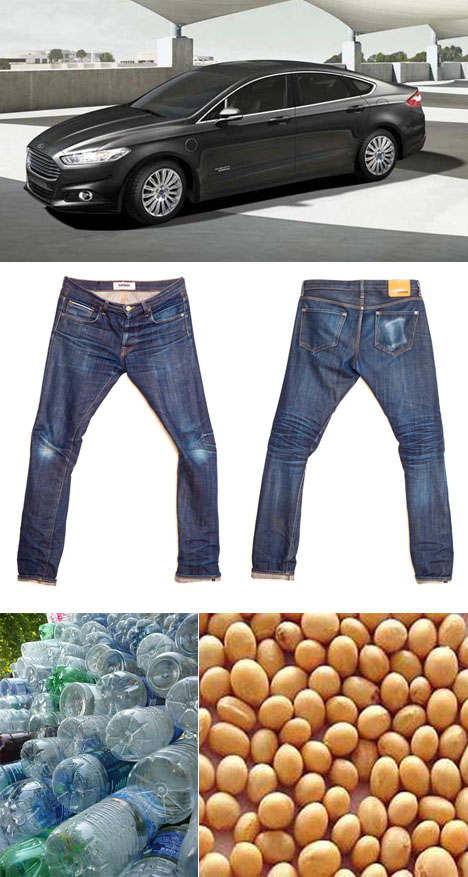 Most carmakers have been focusing on getting their vehicles to burn less petrol. And Ford has been working on getting their vehicles to use less petroleum—during the manufacturing stage. Yesterday the Dearborn-based carmaker announced that each 2013 Fusion model will contain about two pairs of jeans' worth of recycled denim, 38.9 recycled plastic 16 oz. bottles, and 31,250 soybeans.

The denim is processed into sound-dampening material; the bottles are spun into yarn used to manufacture the interior fabric; and the soybeans are used as the basis for the foam in the seats and headrests.

A couple points of clarification: We should point out is that their carefully-worded press release doesn't actually claim the denim comes directly from jeans, nor the yarn directly from plastic bottles; instead the word "equivalent" is used. So while those are definitely the materials being recycled, it's possible they came from someplace other than Levi's and Pepsi. As for the "soy-based sustainable material" used to create the foam, Ford points out that they use it for every Ford built in North America, and that it's "reduced petroleum production by more than 5 million pounds and carbon dioxide emissions by more than 20 million pounds annually."