"A World Where Architecture is the Driving Force Behind Society:" The Fantastic Urban Designs of Francois Schuiten

Francois Schuiten is a Belgian comics artist born in 1956 to two architects. Buildings are in his blood, as is artistic talent, but Schuiten's chosen career path enabled him to pull off something every architect dreams of but none can do: By working in the comics world, Schuiten can create entire cities without limit. 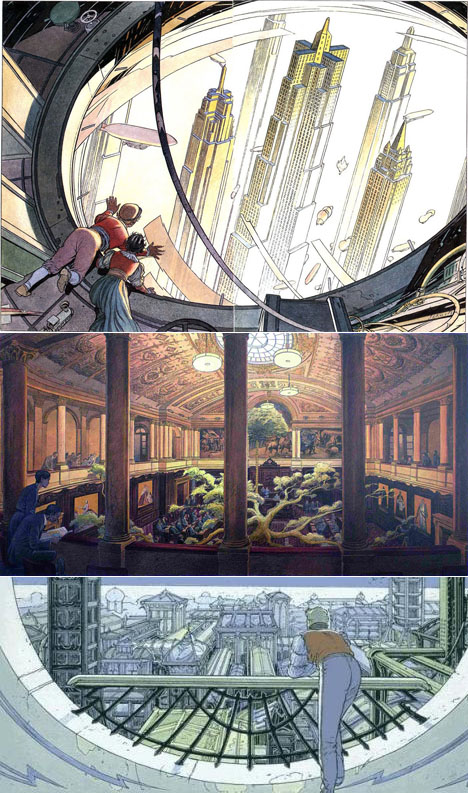 There is no budget-minded client, no structural engineer, no combative contractor, no urban planning quagmire, no pesky laws of physics to arrest the beautiful urban explosions that flow directly from Schuiten's mind to the pen. 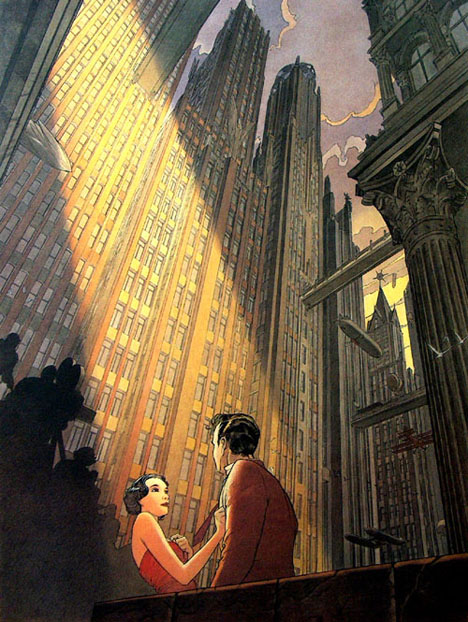 As a working comics artist since 1973, Schuiten has been prolific. But the series that will probably be of most interest to Core77 readers is his Les Cites Obscures, re-titled in English as Cities of the Fantastic. Done in conjunction with his childhood friend Benoit Peeters, Les Cites Obscures was

...an evocation of fantastic, partly imaginary cities...Every story focuses on one city or building, and further explores a world where architects, urbanists, and ultimately "urbatects", are the leading powers and architecture is the driving force behind society. 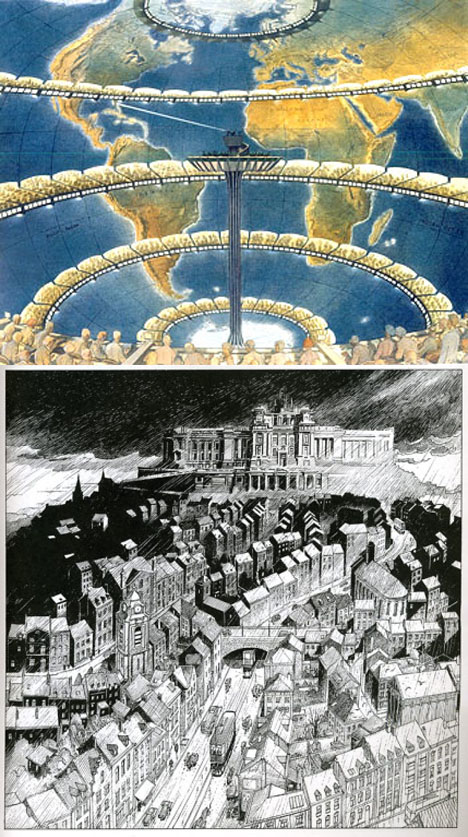 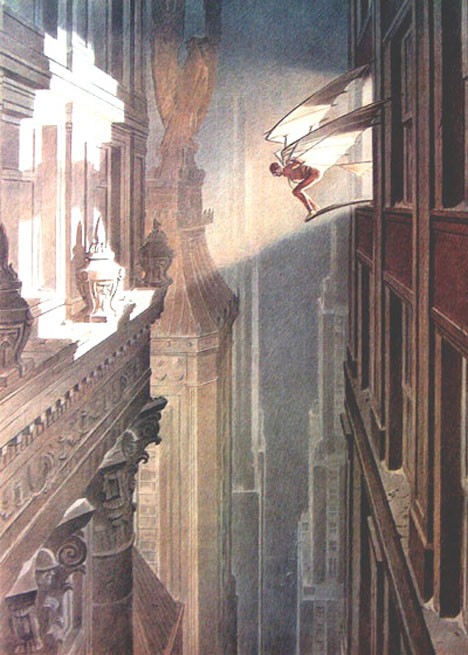 A native of Brussels, Schuiten coined the term Bruxellisation, "the destruction of...historic Brussels in favor of anonymous, low-quality modernist office and business buildings," and it became an important theme of his work. In laying the groundwork for Les Cites Obscures,

Schuiten began drafting a parallel world of vintage architectural splendor reflecting his childhood memories of Brussels, a world which can be reached primarily through remaining buildings of these times gone by. In an ongoing attempt to prevent the spread of knowledge of this parallel world, mostly faceless authorities in our world increasingly have these buildings torn down, and in Schuiten's world this was the true reason for chaotic, headless Bruxellisation where functional and organic buildings were destroyed in favor of ill-planned, useless, and confusing structures such as ill-planned roads, detours, freeways, and anonymous office buildings that destroyed the organic fabric of a city and resulted in dysfunctional traffic and living routines. 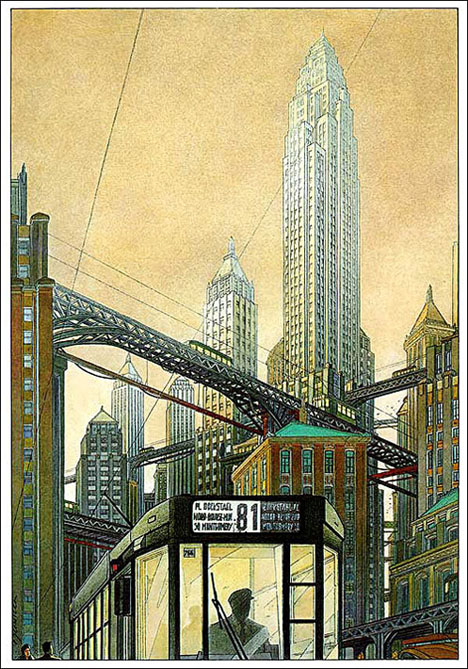 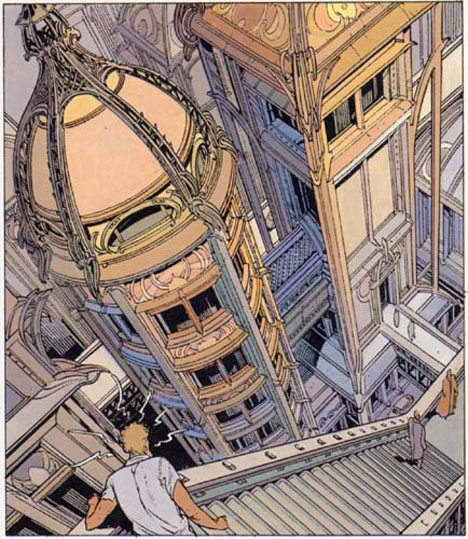 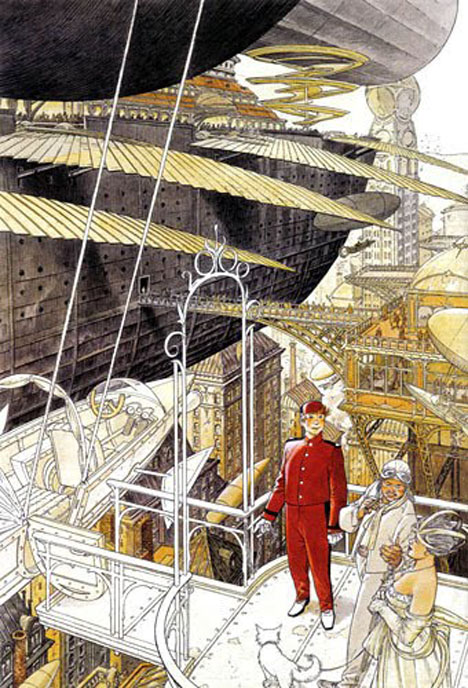 Like many of you I love cities and have been in a lot of them, and day-to-day urban living makes it easy to forget why you love them. Looking at Schuiten's work snaps my memory back into focus. 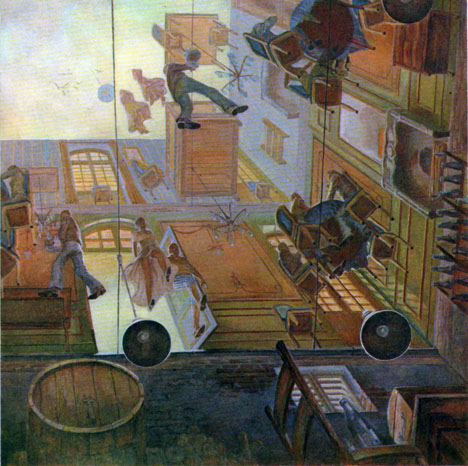 Fantastical drawings like this one, of a simple apartment building seen
without floors, remind us of just how crazy the notion of a city is.

Fantastical drawings like this one, of a simple apartment building seen
without floors, remind us of just how crazy the notion of a city is.

There's a great interview with Schuiten here where he discusses his work and how it was influenced by being the children of architects. The Francophones among you can read it in its original language. Speaking of which, would one of our French readers be kind enough to translate the following Schuiten quote in the comments? Google Translator gives us the gist, but we'd rather hear a native speaker's more nuanced take (apologies for the lack of accent marks):

Along the lines of that quote: While Schuiten's creations are primarily virtual, he was responsible for designing one of the most beautiful spaces I've ever been in, in one of the unlikeliest locations. I'll touch on that in a future entry.