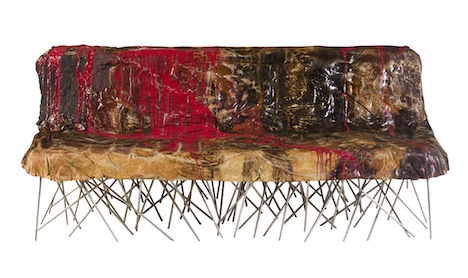 When South Carolina-based furniture designer Benjamin Rollins Caldwell, of BRC Designs, flew out to Ghana, he knew he'd be in for a unique opportunity to develop his design practice. He began an apprenticeship with Eric Adjetey Anang, the famous coffin designer near Accra, Ghana's capital. Caldwell would join Anang's crew, creating custom coffins that reflect the individual's hopes, dreams, hobbies and/or lifestyle. Some of Anang's more famous designs range from a mobile phone to a fish to a bottle of alcohol.

"Building coffins was the hardest work in my life (literally)," Caldwell explained in an interview with Core77. "I have so much respect for Eric, working in the heat and using mostly hand tools as opposed to power tools. It took me a while to grasp the construction of the coffins and how they are put together." 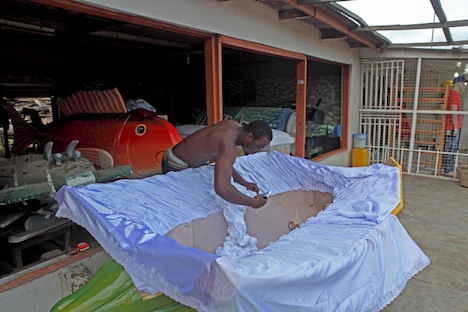 Eric Adjetey Anang at work in his studio building a new coffin.

And after all that hard work, the coffins, like Tibetan mandalas, would be appreciated briefly during the ceremony, only to be buried and never seen again. "I experienced mixed feeling during the actual burial," noted Caldwell, "as this artful coffin we built was now being buried in the ground never to be seen again, and yet at the same time serving its purpose of providing a resting place for the corpse it contained. This made me realize that coffin making is really about the process of building the coffin and not necessarily about the final result (although the final result is quite stunning)."

Caldwell's newest line emerged from this work, as he realized he wanted to focus on process as well, while creating something of functional value. And so the Risen in 30 Days line was born, a series of "zombie furniture" pieces. He and his assistants dig holes in the ground and lay plastic down. Due to the variation in the ground, the exact shape always varies. After dropping in a little sand, they place concrete into a mold, upside down, and let it set for 30 days. After this one-month incubation, they unearth the furniture. 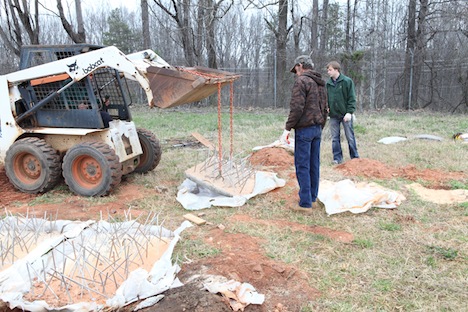 Unearthing the furniture pieces, which are buried underground.

To top it off, they stain the pieces with acid, itself a variable process, to create a deathly, out-from-the-grave feel They focused on the rough patches in particular: "We stained these areas with a dull black and brown as if rotting flesh and then we dripped glossy red stain over the area creating the appearance of an oozing, rotten wound." This variance keeps with the zombie theme but also contrasts sharply with the necessary precision of coffin-making.

Indeed, the idea of pouring concrete in the ground came from watching a traditional Ghanian funeral ceremony, during which concrete was poured into the ground to form the grave and surround the coffin. Risen in 30 Days is a response, "My idea was to make more uncontrolled variables," explained Caldwell. "It's not just a one day type of event." 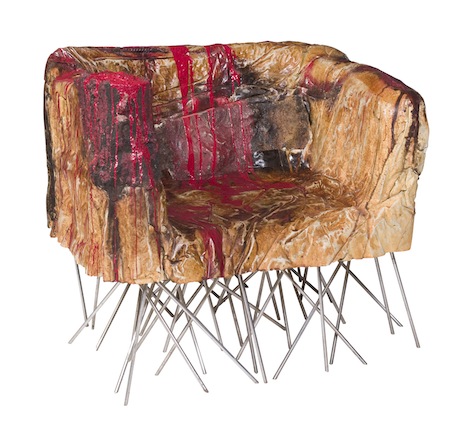 He tested out viewer response at the recent ICFF. How did folks respond? "The first person who saw it said 'It looks like someone died on this chair.' It's kind of in your face." Caldwell has no immediate plans to showcase the work but the images are stunning, and I'd love to see a chair or table in person. Those curious about the works can view them online or visit his studio in Spartanburg, South Carolina.