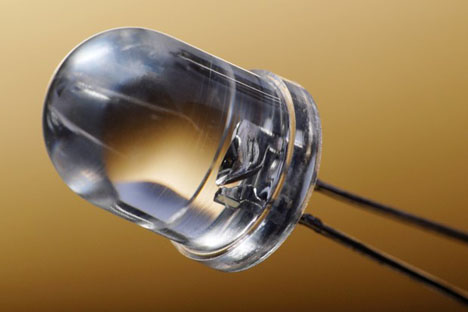 Materials scientists know that things behave differently on a microscale than they do on a larger, more human scale. And now, researchers at MIT have apparently proved that this is true of light as well.

The MIT team, comprised of Parthiban Santhanam, Dodd Joseph Gray, Jr., and Rajeev J. Ram, have created a common-sense-busting ultra-efficient LED with an efficiency of 230 percent. Their light draws 30 picowatts of power, yet produces 69 picowatts of light.

How the heck is that possible? The long answer looks like what Good Will Hunting was scrawling out on the chalkboard between bouts of mopping. The short answer is,

The researchers chose a light-emitting diode with a small band gap, and applied such small voltages that it acted like a normal resistor. With each halving of the voltage, they reduced the electrical power by a factor of 4, even though the number of electrons, and thus the light power emitted, dropped by only a factor of 2. Decreasing the input power to 30 picowatts, the team detected nearly 70 picowatts of emitted light. The extra energy comes from lattice vibrations, so the device should be cooled slightly, as occurs in thermoelectric coolers.

The gist of the "lattice vibrations" is that the device draws in ambient heat from outside of itself and converts that into light. It's an exciting prospect, even if the breakthrough is currently more academic than anything else: "These initial results provide too little light for most applications," the research synopsis admits. A picowatt is just one milion millionth of a watt.