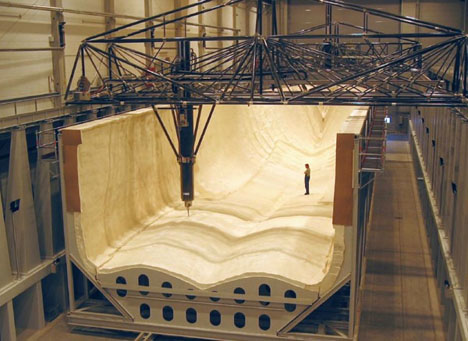 If this large-scale CNC machine had been built in America we'd be using it to carve swimming pools and skateparks, because that's how we roll. But the higher-ups at Germany's EEW Protec mechanical engineering firm are using it for more sensible things, like carving one-piece molds for 50-meter turbine blades.

The machine has an X-axis of 151 meters which, despite the metric, sounds more like an American dimension to me. Because that's what we do over here. A neighboring firm makes one first with an X-axis of 150 meters, then we add an extra meter and casually bring it up during the inter-company softball game. "No no, that's great, Bob," we'd say. "I'm sure 150 meters is big enough for the projects you guys work on. But ours maxes out at, you know, 151 or 152."

You may notice that there's a guy standing in the mold. He's probably German, so I can't tell you what he's doing in there. If he was American, I could tell you that without a doubt, he's a bored engineer patiently playing a dangerous game of CNC chicken. Because that's how we...ah, you get the idea.