Although life in Tokyo is more or less back to business as usual since the tsunami last spring, one of the long-term effects has been the setsuden efforts: to conserve energy in a country that relies on nuclear reactors for upwards of 30% of its power. Nearly all of the nuclear power plants have been shut down since then, and the nation has made a commendable effort to reduce energy consumption in kind... especially during the sweltering summer months, when air conditioning is all but required to maintain sanity in the urban heat island of Tokyo. 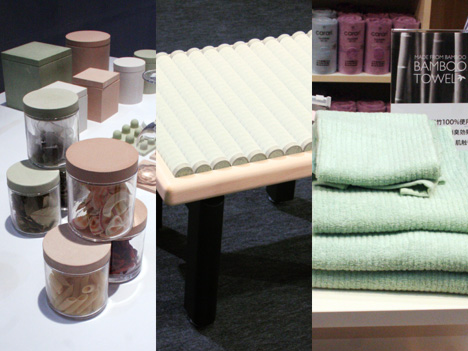 Although setsuden is no longer mandated by the government, individuals and companies alike have adopted energy conservation for good. In addition to efforts at more conscientious and efficient manufacturing, Japanese companies also have a concrete incentive to develop eco-friendly products for staying cool and dry during the rainy season and beyond (Uniqlo, for one, is incorporating deodorant and 'silky dry' technology in much of their undergarments). Thus, several Japanese companies at InteriorLifestyle Tokyo were pleased to present natural products to rival AC as the primary means of combating the oppressive humidity. 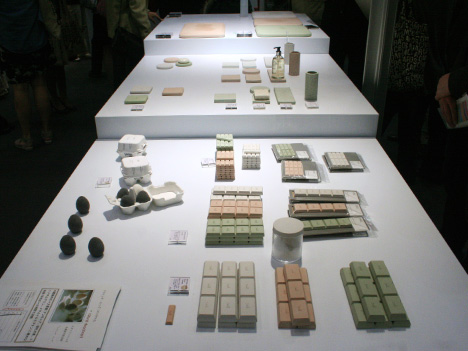 Developed by Isurugi Co., LTD and H concept, "Soil" is a product line that incorporates traditional plastering techniques with a material known as diatomaceous soil. The naturally-occurring material is "known for its moisturizing and absorption qualities, as well as a pleasant touch," which makes it both recyclable and non-irritating to the skin. According to the press materials,Diatomaceous soil is a sedimentary layer formed from deposited plankton on beaches and lakes. The "soil" is very porous and therefore good at absorbing moisture, moisturizing, and deodorizing. The soil is naturally found in different environments and climates, and therefore naturally has different colors. 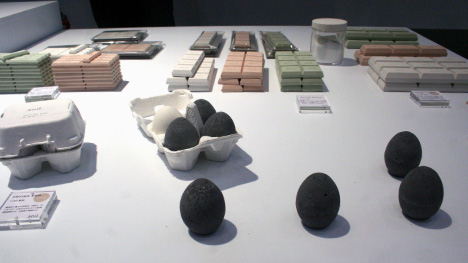 As for the craftsmanship? Isurugi specializes in sakan, an age-old technique of plastering soil (and later, cement) that dates back to the year 645 AD. 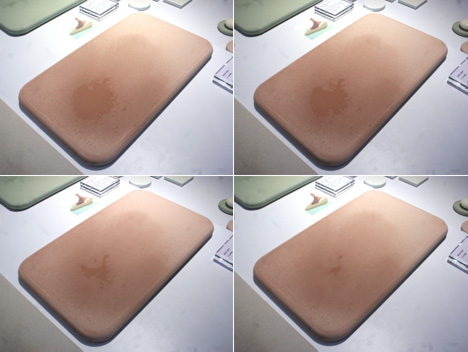 The mat is mostly dry after just 10–15 seconds

The product line consists of desiccants and deodorants for a wide variety of household applications. From food containers to small blocks for, say, a salt shaker to dishracks and floormats—all with an understated aesthetic—"Soil" is a veritable ecosystem unto itself. 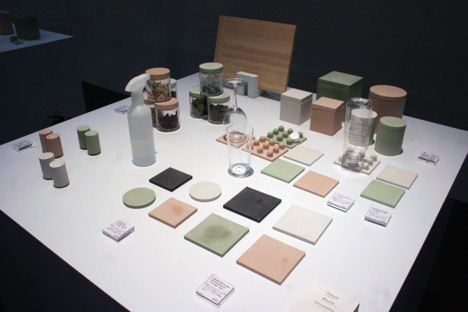 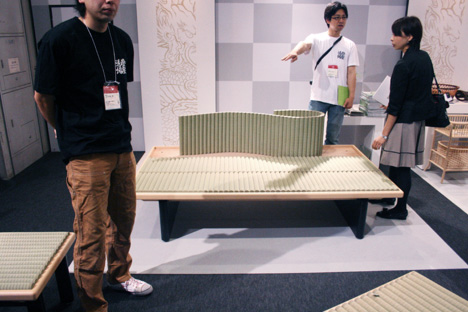 As with Isurugi's "Soil" product line, Tatamiyadojo's "Igusa Roll" collection is a modern update to a traditional craft. The product is made from leftover igusa (rush grass) from tatami mats, bundled into rolls to form moisture-wicking mats.We effectively utilize rush grass that is too short to make one tatami mat. The distinctive surface has nice cushioning and good texture, and makes a comfortable bench when rolled out. Just like charcoal, tightly packed rush grass has air purifying and humidity control qualities, and the fragrance has a significant relaxation effect similar to herbs. The two-sided design allows both sides to be used just like tatami. 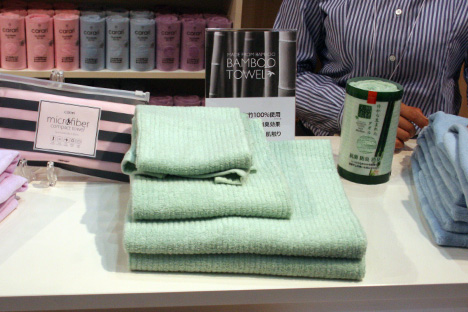 Bamboo is all but shorthand for eco-friendly these days, so I was interested to see that the material had been adopted into a towel. Although further research revealed that quite a bit of processing is required to transform the hardy wood into a textile, these towels retain the anti-bacterial qualities of bamboo, as well as neutralizing the odor of sweat. While the texture is as soft as that of any other towel, it is cool to the touch. 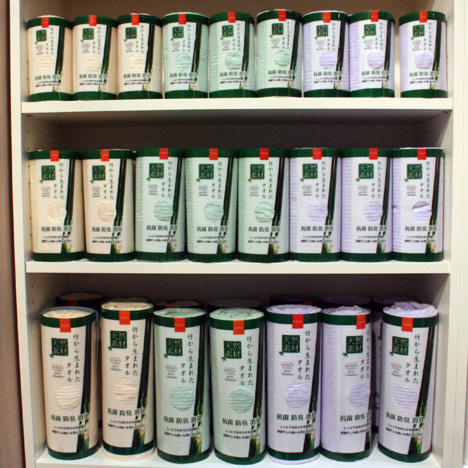 The packaging is also quite nice.