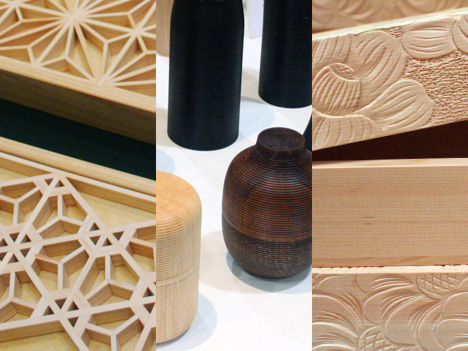 Japan has a rich tradition of carpentry, among other arts and crafts, which was represented in a full gamut of materials, techniques and products at InteriorLifestyle Tokyo. While we've already had a look at Ishinomaki's community-oriented approach, there were several other notable wood specialists throughout the show. Here are three of our favorites: 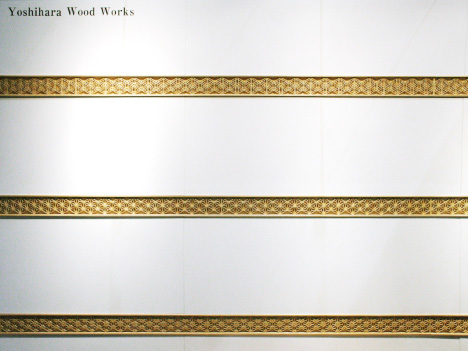 Designer Keiji Yoshihara hails from Misumi Town in Shimane Prefecture, where he has mastered the technique of kumiko: creating pattern and form from precisely cut, interlocking strips of wood. While the method is over 800 years old, mechanical accuracy certainly helps to minimize the margin of error, freeing the designer to explore new possibilities for the process of 'weaving' the strips together. 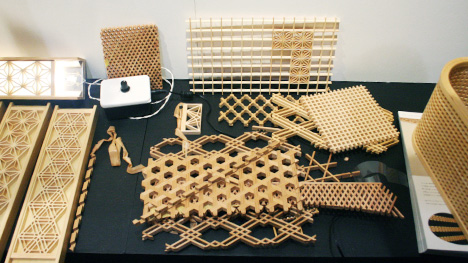 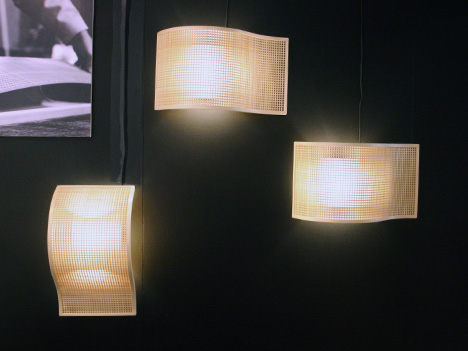 The kaze (wind) lamp has no glue or screws: the curvature is based on the infinitesimal angles at which each strip of hinoki (cypress) is cut. Yoshihara's description is succinct: "Bracketed wooden wall lamp shade made with the shape of 'wind' in mind." 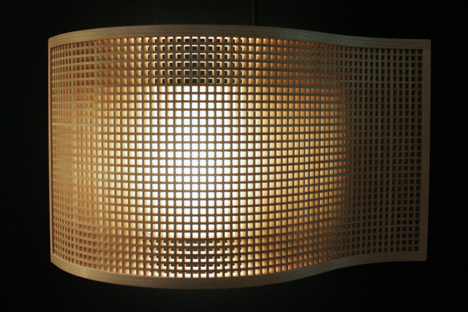 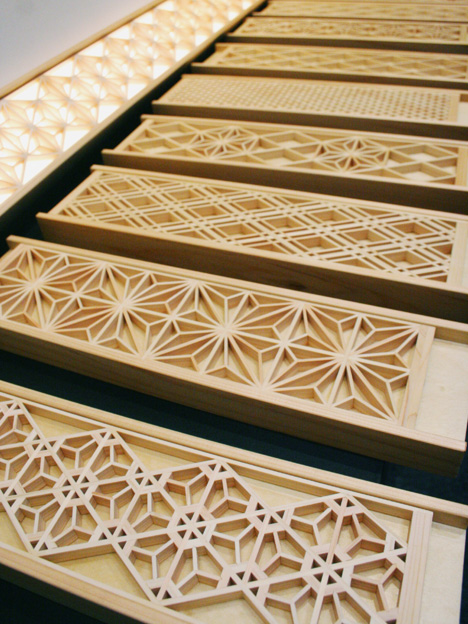 The designer has also adapted the technique to create what he calls "Border Kumiko," which can serve as subtle lighting, elegant trim or more overt (yet still understated) decorative wall-mounted elements. 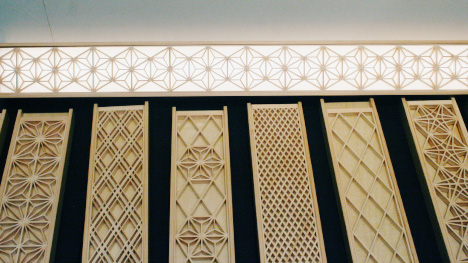 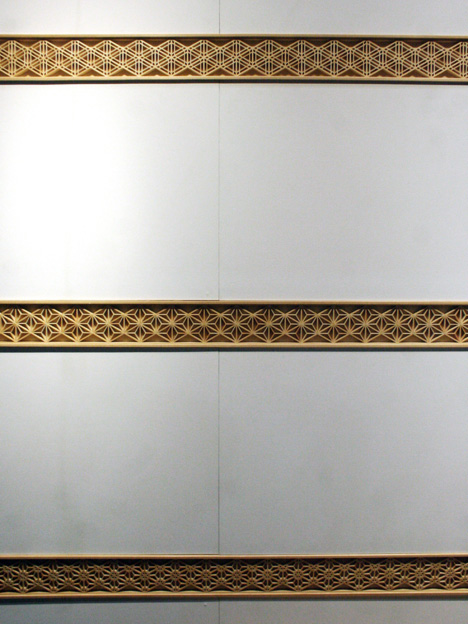 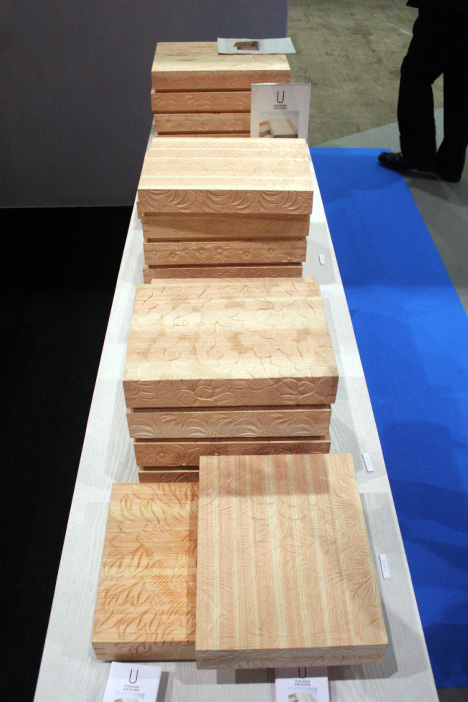 "Nikkobori" takes its name from a traditional woodcarving method from Nikko City in Tochigi Prefecture, in which the lumber is usually dried for a period of time, between six months to upwards of three years. 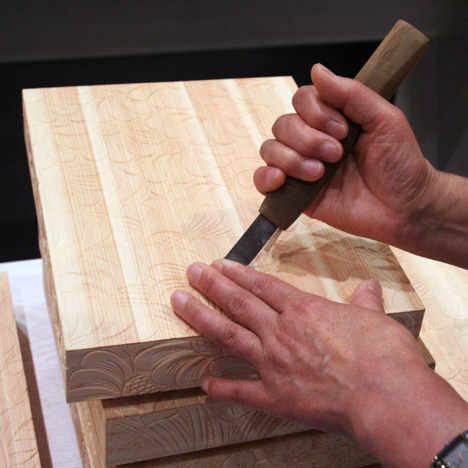 The highly detailed patterns—which traditionally depict local flora—are carved with a tool called a hikaki, a blade with three edges of varying length and width. 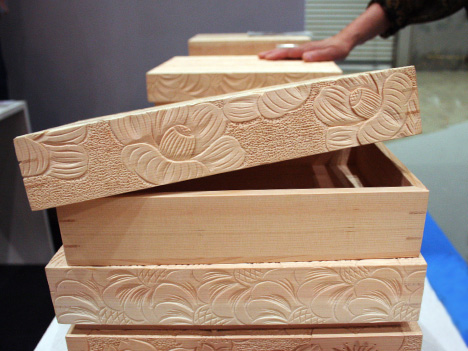 The boxes shown here are for general use; the interior dimensions are roughly the size of A4 paper.

Shosen (Syosen) was founded in 1908 in Ishikawa Prefecture as a woodwork shop that specialized in woodgrain wares that serve as the base of lacquerware (i.e. before the many layers of lacquer are put on). In recent years, Shosen has collaborated with designers to take their traditional craftsmanship and reform it for the modern world. 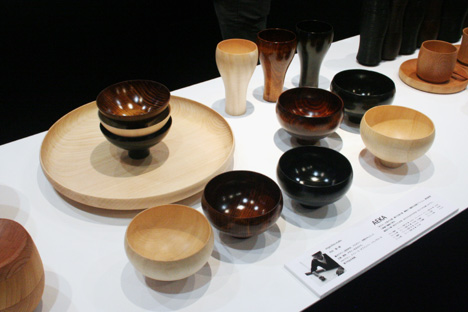 Aeka roughly translates to delicate, gentle and beautiful, as well as fleeting, transient and ephemeral—an apt description of the delicately curved vessels, designed by Shigeichiro studio. 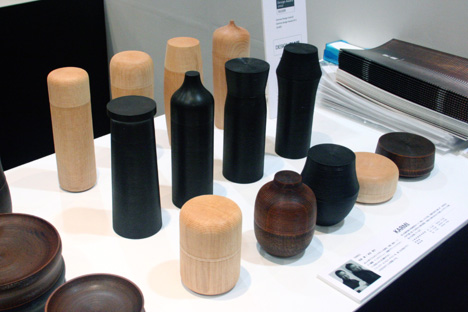 These Karmi tea canisters are made from Japanese Cherry Birch, which is resists changes in temperature and humidity. The lids are seamlessly slide on to the base, which is carefully treated to a specific moisture percentage over the course of several months. "This delicate feature depends upon the skills and the intuitions of experienced craftsmen."