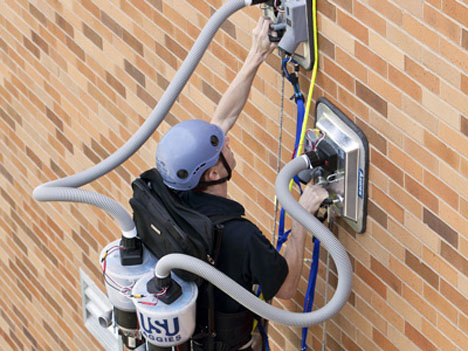 The prerequisites for the device were a) it has to assist soldiers in scaling tall walls, without a grappling hook and b) it has to produce a noise that will drive my dog crazy, even in video playback. The Aggies thus created the Personal Vacuum Assisted Climber, which has to be seen to be believed:

The Ascending Aggies, who beat out 33 other schools, have scored $100,000 in development money. In the future we will presumably see smaller, lighter, and quieter PVACs from the team. I also think these guys should drop James Dyson a line, as he's got vacuums down to a science. It's a relief to know I'm not going to lose suction while vacuuming up dog fur; how much more of a relief will that be to someone hanging seventy feet off the ground?