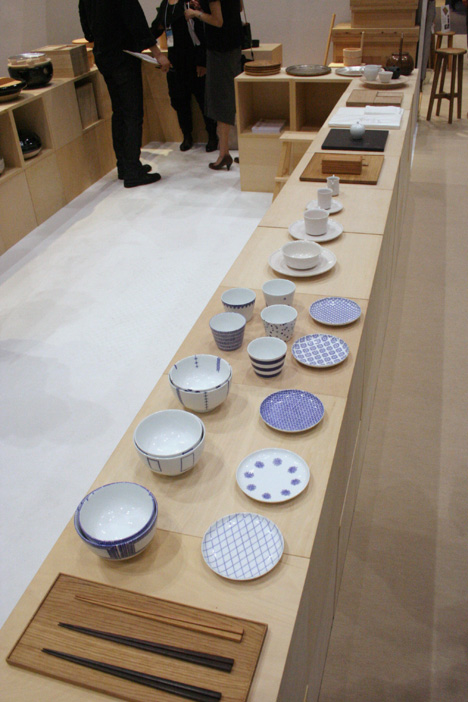 As in carpentry, Japanese craftsmen have a long history of working with ceramics, which is precisely why 1.) they have achieved a nearly unparalleled mastery of handmade tableware and 2.) they are in a position to innovate within the craft. Indeed, Nicolette Naumann, Vice President of Messe Frankfurt (the company behind InteriorLifestyle Tokyo) noted that they'd invited bone china experts NARUMI to exhibit in the traditional craft section of one of their shows, only to find that they planned to exhibit the new OSORO "Open Tableware System." We had a chance to see the brand new collection when it debuted at InteriorLifestyle Tokyo, as well as a full range of traditional ceramics from Azmaya. 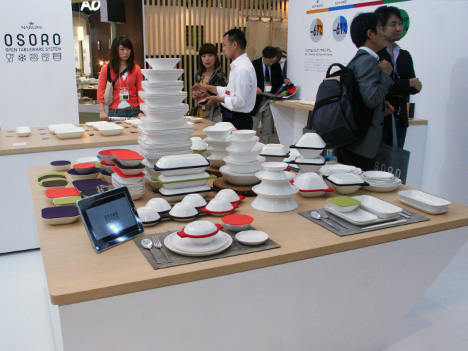 If the preponderance of OSORO totes was any indication, NARUMI did a good job spreading the word about the new products. Designed by Manabu Tago and Hiroko Tago of MTDO, OSORO is a series of dishes in varying sizes that is paired with silicone lids, designed to simplify the myriad chores in keeping leftovers: storage, reheating and cleaning.More and more, we use microwave containers and dispensable plastic wrap by day. You want to live simply, but your kitchen is full of utensils... does this sound familiar? With OSORO, you don't need any more plastic wrap and food containers. With a surprising stacking capability, it will leave you with plenty of space in your cupboard. 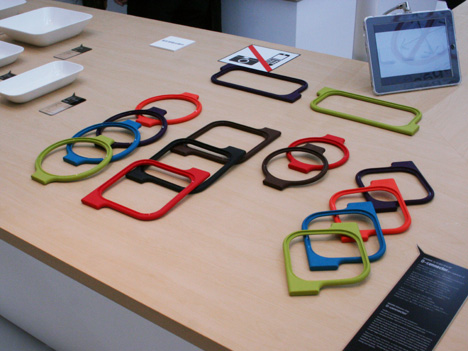 The silicone lids, which come in seven colors, are intended to replace plastic wrap in refrigeration and reheating applications, while the O-ring is designed to join two dishes for steaming in the microwave. The lids can be attached with a clever 'one-touch' sealing system and they can even support the weight of additional bowls, but unfortunately, they do not form an airtight seal (i.e. they're not portable). 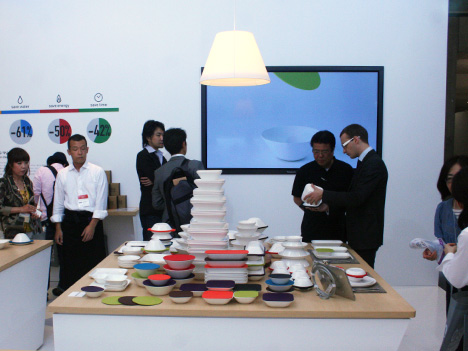 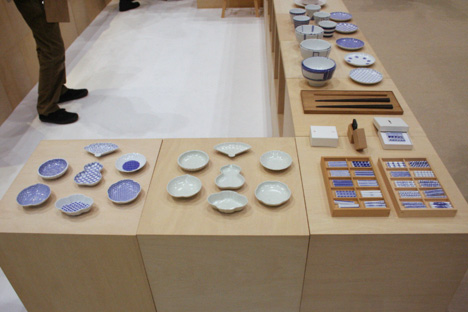 Meanwhile, the more classical (yet arguably more elegant) dishware by Azmaya served as an apposite contrast to the towers of bowls and plates and arrays of the OSORO booth. The mazemara at left and center are typically used to serve soy sauce, pickled vegetables or other small condiments (the name literally means "bean dish"). Chopstick stands with various patterns are at right. 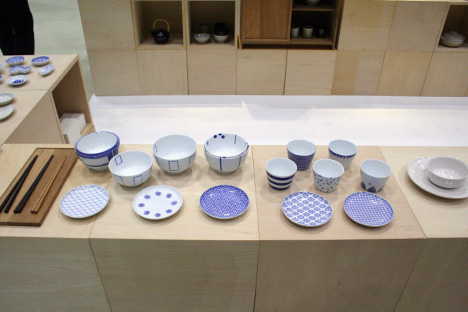 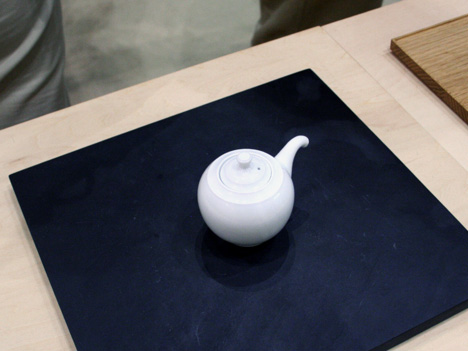 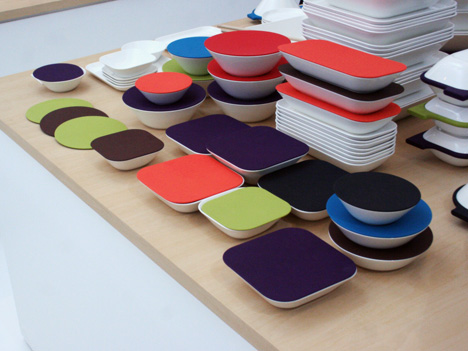 The Azmaya pieces are certainly suited to certain settings: given their relatively small size and prescribed purposes, they might supplement any formal Japanese meal. OSORO, on the other hand, takes pride in its East-meets-West approach:NARUMI, as the first Japanese manufacturer that succeeded in the mass production of bone china in 1965... Although NARUMI has produced Western-style tableware, our manufacturing has been backed up with Japanese cultural DNA, [including principles of]:- Yo-no-bi: beautiful equipment must have high functionality
- Ikki-ta-yo: one vessel is used for various purposes
- Ireko structure: many items could be stored into very small and smart packaging.Equipment that is used daily should be minimal, reasonable and beautiful—based on a philosophy. The Japanese way of life has been highly sophisticated... utilizing limited tableware, Japanese people enjoyed various kinds of food; not only Japanese food but also Western and Chinese. But these days, Japanese people tend to lose their cultural DNA little by little; by using lots of equipment and wasting a lot...After the massive earthquake hit japan in 3.11.2011, our lifestyle has been changing again. People want to spend more time with their families and friends than ever before. People want to contribute in solving social problems through their daily lives. The biggest hint could be found in the Japanese wisdom: a minimal and smart lifestyle. Aiming for a new era in Japanese food lifestyle, we wish to grow together with the people in Japan. This is our hope for OSORO. 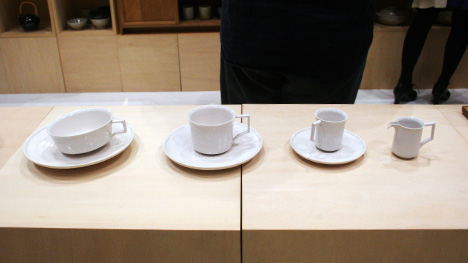 Yet Azmaya, for their part, have also brought a contemporary approach to their artisanal expertise: the coffee cups above, a collaboration with Masamu Saruyama, have the concept of "Japanese-made Western tableware with a straight edge." The idea is to offer an alternative to Western (European) pottery and porcelain, which focus on sharpness, thinness and uniformity. These cups (and matching saucers) were created with Japanese techniques, featuring small 'imperfections' in the shape or application of the glaze and enamel, which the Japanese appreciate in ceramics. 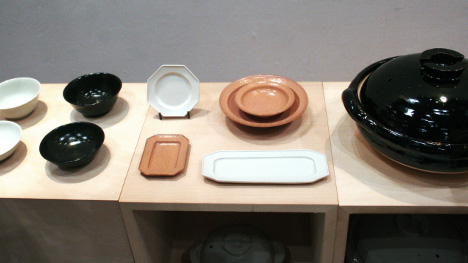 If the coffee cups represent the leading edge of Azmaya's dishware offerings, the clay bowls, trays and Suihanagama Donabe rice cooker suggest the breadth of both their collection and Japanese ceramics on the whole. "Each rice cooker is handmade on a wheel using the local clay from Iga. Iga-yaki pottery is one of Japan's most highly-regarded traditional ceramics and the clay is said to be the finest for producing donabe due to its porous qualities." 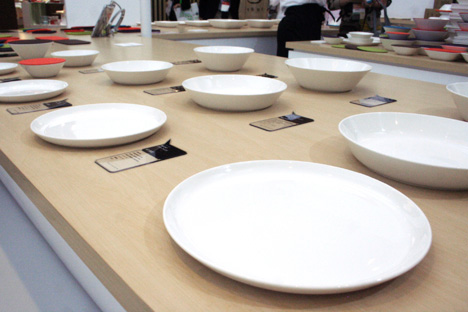 Of course, OSORO features material innovations as well:NARUMIO, the new material for OSORO, is special in its high heat resistance [up to 220° C] and gentle ivory gloss. Compared to the hard-ish cold 'white' seen in porcelain or fine china, food looks so much better. The high quality, translucent glaze is based on technology nurtured for NARUMI's bone china. With its exceptional smoothness, it is easier to wash up since it makes the food remains harder to stick to the surface. 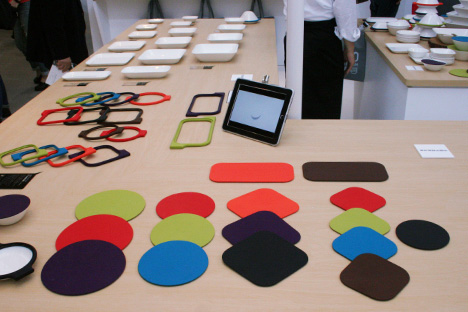 Still, the fact that the lids don't form an airtight seal might be a dealbreaker for me, if not for the Western market as a whole—for better or for worse, even our plastic takeout containers can often be reused as tupperware, at risk of god-knows-what chemicals leaching into our leftovers. Thus, the OSORO system reminds me more of Marna's 'Pig Steamer Lids', which serve the same purpose, than a proper food storage system. (For what it's worth, I've used one of the Marna steamers, and I can attest to the fact that they work very well.) I wonder if it has anything to do with the fact that many apartments in Tokyo lack full kitchens and residents must make do with a microwave and hotplate? 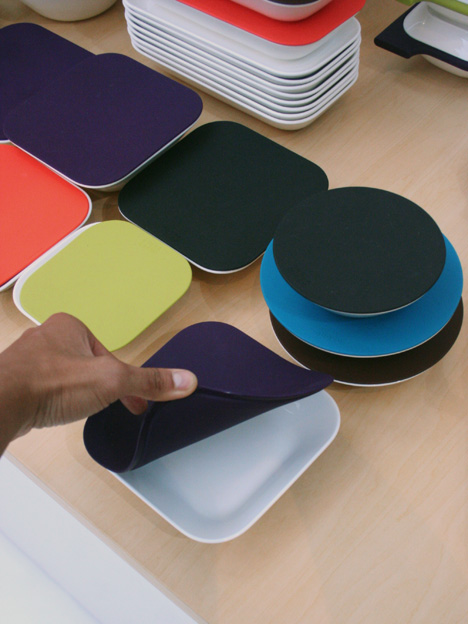