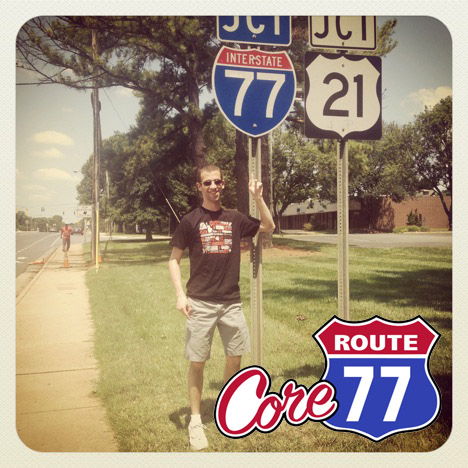 After cruising down '95 for the first three days (Philly, DC & Richmond) of his road trip, Dave has ventured inland for the second leg of his cross-country circuit, which sees a couple studio visits in Charlotte, NC and Atlanta, GA. Keep up-to-date with all of the adventures on Route 77 by following @DaveSeliger on Twitter! 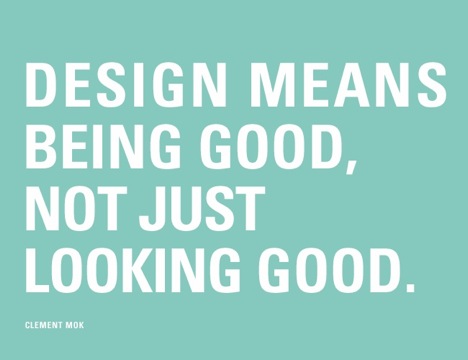 As I'm finding with many experiences on this road trip, I really didn't know what to expect heading down to Charlotte, NC. While doing my pre-trip research I discovered that Charlotte had what seemed to be the biggest hotbed of graphic design in the Southeast. So I did the only thing I could think of and sat down for some mouth-watering BBQ with top-notch designers Rachel Martin, David Sizemore and Matt Stevens (whom I've covered before). 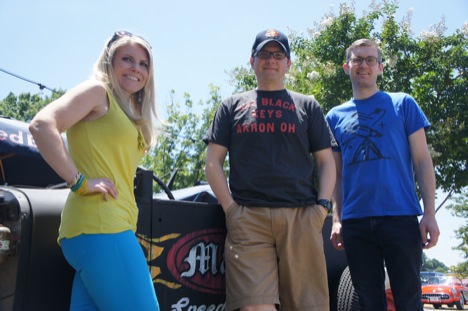 The question on my mind was why graphic design in Charlotte has thrived in a world primarily dominated by the social media- and start-up-driven Bay Area. Each of the designers I spoke with in Charlotte has had their own unique path to success. Martin runs her own design studio and chooses to work only with "socially responsible" groups and "good people who do good." Stevens left a firm after a decade-long career, spent 90 days with Facebook, and is now finding his way on his own. Finally, Sizemore works for a large branding firm by day and does freelance illustration by night.

Design seems to flourish in Charlotte both because of and in spite of the location. Martin came from NYC where she was "just a number," but in Charlotte, "I can shine and do my own thing." Stevens had some perspective on the topic given his recent stint on the West Coast with Facebook. "The West Coast is more saturated with talent," said Stevens. "Everyone out there is extremely talented and it pushes you to raise your game." Stevens also described how there is more of an "education piece that has to happen with a lot of clients" in Charlotte about what exactly design is and how it best improve their business. But Charlotte is also just a "great place to live," with nearby mountains and beaches, as well as a low cost of living, an extremely attractive prospect for any young designer.

A city like Charlotte also creates an environment for a more tight-knit community of designers. "It's a very sharing community," said Martin. Projects and clients are passed along when a designer is too busy, while design collaborations that help reinforce the community self. One of Sizemore's upcoming projects is even centered around neighborhood-specific t-shirts that represent pride in one's location and community. 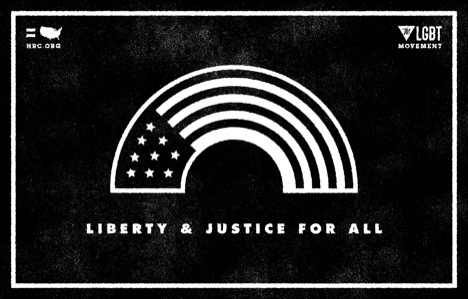 We also talked about design in the age of the Internet. Although the Internet is not new at all, its applications have become more increasingly intertwined in our lives, especially as designers with portfolios of our work. "I have a big stage now," said Stevens. "There are few limitations if you're making good stuff and putting it out there." This stage allows designers, like the ones in Charlotte, to no longer have to worry about doing work on the national or global scale just to gain recognition; a local project can now become just as famous internationally through utilization of the interconnectivity of the web. Designers can then focus on what Stevens, Martin, and Sizemore see as the more satisfying local projects.

Lastly, design is an opportunity, if not a responsibility, to make the world a better place than you found it. "Architects have a civic duty to design buildings that improve society," said Martin. "Graphic designers should also have that civic duty to shape the world through good design." [Ed. Note: David Berman makes a more emphatic statement about this notion.] 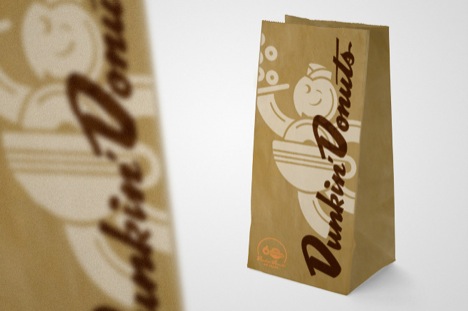 I've written two articles on the work of innovative Atlanta-based architecture firm ai3 and so they were a must-visit when passing through Georgia. I spoke with partners Lucy Aiken-Johnson, Patrick Johnson, and Dan Maas as well as Dave Heimbuch. The four partners originally all worked together at a corporate architecture firm but decided to start their own firm after collaborating together on the design of Atlanta's aquarium. "We knew the way we wanted to work and the type of person we wanted to work for," said Aiken-Johnson. Ironically, although none of the partners had ever worked on a restaurant in their collective four decades of previous experience, ai3's very first project was, in fact, a restaurant. 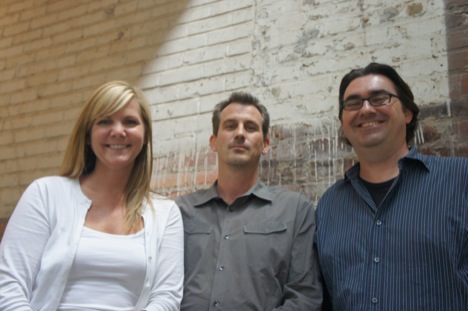 Every ai3 project starts off with a "vision session" where everyone involved in the project, both from ai3 and the client, "can hang out for several hours" and answer questions about "What do we want people to say about the space?" and "What story do we want to tell?" These two questions form the foundation of everything ai3 does moving forward. The whole process seems akin to a design thinking workshop session, perhaps due to Heimbuch's education in industrial design, but also because of the empathic nature of the firm as a whole. "[Partner Joe Remling] used to say, 'We need to be a great first date,'" said Aiken-Johnson. "And that usually means just sitting there and listening!" 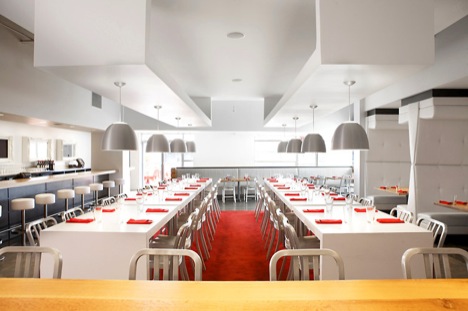 One of ai3's most visually stunning projects, an office for local interactive design agency the SuperGroup, is a perfect example of the firm's success with building bonds with their clients. "We first had to gain their trust," said Heimbuch, "before they felt OK saying they wanted something weird and retro future. Then they'd send us clips from '60's B-movies." When we visited the SuperGroup, one of the partners of the agency backed this up: "When we said we wanted 2001: A Space Odyssey meets Space Mountain, they didn't give us blank stares." 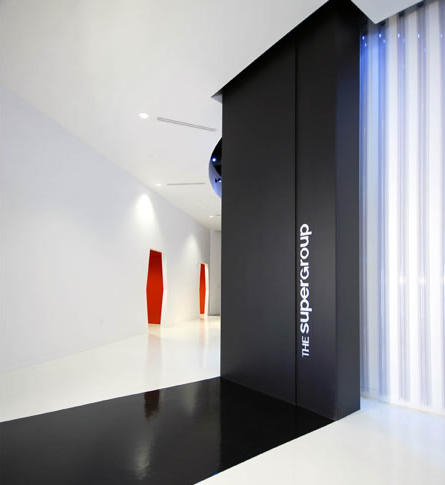 Aiken-Johnson and Heimbuch took me on a driving tour of some of their projects throughout the city. There would literally be stretches where every other building we passed was designed by ai3. "In Atlanta, everyone knows what we've done," said Maas, to the point where the majority of ai3's work now comes via recommendation. However, the desire to work locally is not so much a sense of responsibility, described Heimbuch, but working locally is "more directly related to your actual life than something across the country you'll never set foot in." Moreover, working locally allows the firm to maintain ties with their clients and buildings. "It's not hard for us to go back," said Maas. "We're all friends. We can call up and say, 'Let's talk.' There's always an open line of communication." 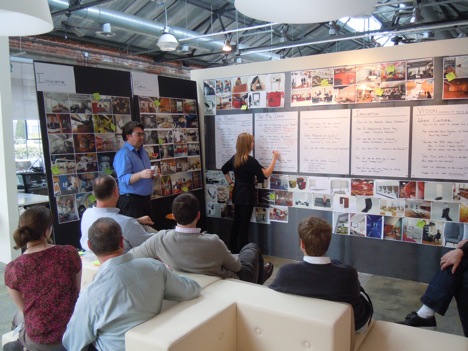 As with Charlotte's graphic designers, the partners of ai3 also believe that the design profession could be so much more than it is today. "I don't think the design industry has done a good job broadcasting what we can do," said Heimbuch. "The general perception is that we'll design you a restaurant, unveil it, and then hope you like it." ai3's process-intense approach, though, helps to give architecture a new definition and direction. 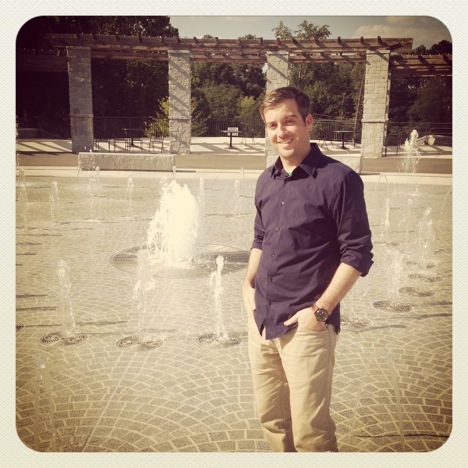 Next, I met up with Chris Livaudais, President of IDSA Atlanta, to tour a section of the BeltLine. The BeltLine is to Atlanta what the High Line is to New York City; both are even projects from James Corner Field Operations. Ryan Gravel, then a Master's student at GeorgiaTech, conceived of the BeltLine as his thesis to re-use 22 miles of an abandoned railroad encircling Atlanta to connect 45 disjointed neighborhoods throughout the city.

Livaudais described Atlanta as a city that "forgets its history," demolishing old buildings just replace them with larger ones and constantly expanding outwards away from downtown. This year marks the 50th anniversary of a plane crash that claimed over one hundred of the city's best and brightest creative minds.While the High Line serves as a single stretch of respite from the chaos of the city, Livaudais sees the BeltLine as less about trying to redefine Atlanta and more about reuniting all of the scattered elements that could make up a fantastic metropolis. 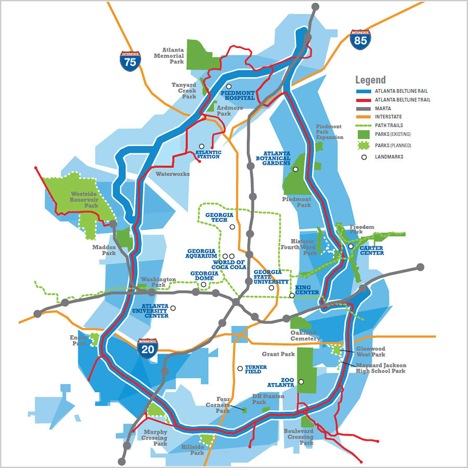 Florian Vollmer of Info Retail, one of Livaudais's co-workers, later joined us for a conversation about design and the future of the profession. We agreed that the various design professional societies, instead of working to bring together designers from different fields, have only served to segregate the profession. Architecture may be different from product design on a very basic level, but as I have seen with ai3, Electronic Ink, the BrandCenter and so many others, "design is about design, not a specific field of design," as Vollmer put it. AIGA seems to have figured this out the best, defining itself as an organization about design, not about a specific field. 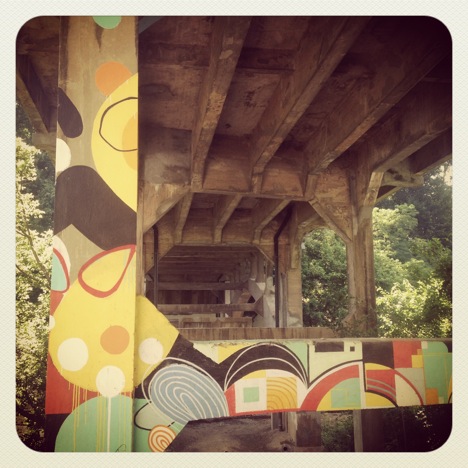 One of the many art projects along the BeltLine

As with the BeltLine and the future of Atlanta, the future of design is about the connections we can make between the various aspects of design. Architects like ai3 look to product design to influence their process and graphic designers like Rachel Martin look to architects as an example of civic responsibility. Without this mindset of connectivity between disciplines, we as designers may never be able to convince corporate America and the general public that design is not just a trend, but is the future of our country. 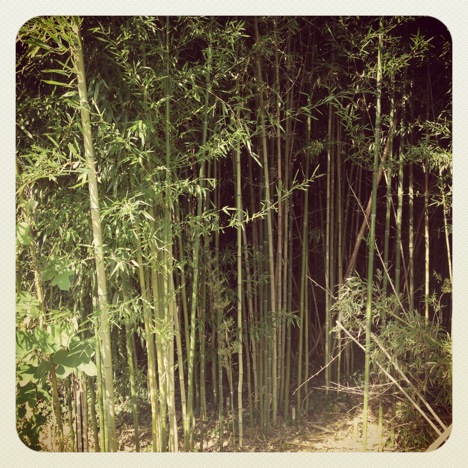 A bamboo forest along the BeltLine