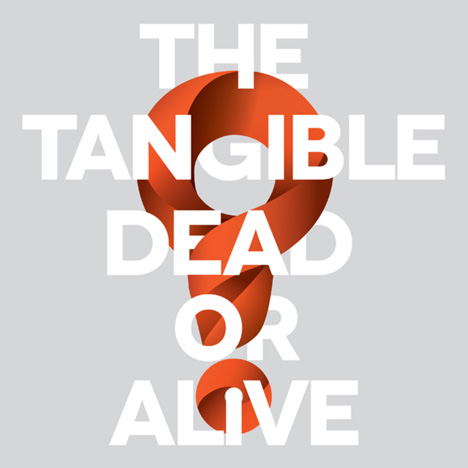 Tuesday night saw the IDSANYC's second annual panel discussion on "The Tangible: Dead or Alive" at Fahrenheit 212. Our own Executive Editor LinYee Yuan moderated the discussion between Tom Igoe of ITP, Dan Formosa of Smart Design, and the inimitable Karim Rashid. Per the rather blunt suggestion of the title, the four design experts explored the dichotomy between the physical and the digital, variously reframed as the material vs. the virtual or (implicitly) as the real and the ideal. Of course, we've come a long way from Plato's distinction, and the broad trend towards the dematerialization of human experience has grown far more complicated than a dualism in the classical sense: as the world becomes digital in new and unexpected ways—and vice versa—we have less distance to step back and reflect. Hence, "The Tangible: Dead or Alive." 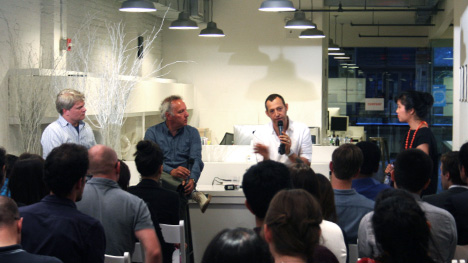 The outspoken Karim Rashid was, as ever, a font of pithy futurism, espousing his opinion that there is no good reason that all physical objects are not beautiful (manufacturing constraints being the bad reason) and, in so many words, dreams of a technologically-enhanced future. For him, it's less a question of tangible and more about experience itself: Rashid fully embraces the dematerialized, digital world as the next stage of the human condition, and his approach to product design might be construed as an attempt to reduce or, if possible, eliminate the resistance of the physical world ("seamless," as he put it).

To that point, he started the conversation with an example of a hotel he recently designed, where an RFID-enabled key will open doors, operate elevators, etc., for guests, who literally do not have to lift a finger (footnote: "Things Karim Just Designed" ought to be a meme...). To this point, Igoe countered that a proximity-based system might open adjacent doors when one is walking by: that the system must understand our intentions in order to be completely seamless.

For the ITP Professor, the best design and technology has an element of "humanness"; insofar as "we're wired... to interact," technology is a reflection of how we negotiate the world around us. Igoe asserted that "there is a value, a pleasure to physicality," and the goal, for designers, should be to find a balance between the virtual and the physical.

"The more you dematerialize [the world], the more you elevate experience."
-Karim Rashid

While Formosa tended to agree, Rashid maintained his contrapuntal opinion that "the material world is an obstacle," citing Marshall McLuhan's "bubble man" in expounding his own objective for design: to excise the banal. His definition of "living a luxurious life" is based on "getting rid of the banal... the dull stuff," and going digital is invariably a step forward. Similarly, he dreams of the day—within years, not decades—that he can sketch in three dimensions by tracing a form in the air. Per his aesthetic, he rejects the modernist trappings of industrial design, which he sees as designing in a box: the rectangular kitchen demands rectilinear countertops, which in turn necessitate appliances that fit in a square footprint. "When we design in 2D, we shape the 3D world. When we design in 3D, we'll shape the 4D world."Given the breadth of the topic at hand, the discourse ventured into a few tangents, including Karim's distaste for the auto industry, Formosa on a lecture called "Touching People," NYC infrastructure, and the astronomical amount of gratuitous data—superfluous Tweets, frivolous "Likes," unremembered e-mail exchanges, etc. etc.—that have spawned an epiphenomenon known as data exhaust. In response to LinYee's invitation to make sense of the excess, Igoe pointed out that it's the digital equivalent of a mirror: our collective digital output adds up to an uncanny portrait of ourselves. 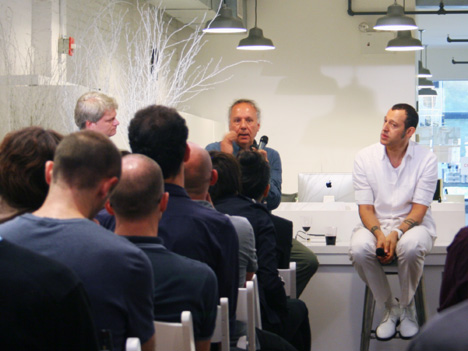 Of course, this is yet another disparity between the digital and the material, and here, too, Rashid played devil's advocate. Utopian outlook aside, he is a pragmatist in many ways—this is a man with some 3,000 products to his name, after all—and his belief that just about every product might be improved in some way is a corollary to his unconventional advocacy of disposability. "We live in a disposable age—I don't think anything really lasts... I don't think [industrial designers] should strive to design anything that lasts." Contrary to the classical (and outdated, in the prolific designer's not-so-humble opinion) notion that permanence is a principle of good design, Rashid is more concerned with designing for the moment, at least until we can all live in bubbles.

Igoe championed a rather more conscientious point of view, largely based on his experience in the hands-on setting of ITP, where he is shepherding the next generation of designers in their Masters studies. Extrapolating from the day when 3D printers are as ubiquitous as 2D ones, Igoe is more concerned with taking things out of the world as the often-overlooked consequence to making them. In other words, given the current trajectory of manufacturing—the shift towards smaller scale and increasing availability of the means of production—the adoptation of reusable or otherwise recyclable materials is paramount.

In response to Rashid's reaction that open source tools democratize design, Igoe made an important distinction: "There's a difference between having the means of production and actually designing." The vast majority of consumers will still entrust designers with the more rarefied side of the process, but 3D printers will afford instant gratification: "They like what you do, they just want it now."

Which is not to cast designers as a creative elite but to illustrate a hypothetical future, one in which products can be "taken out of reality as easily as they can be brought into the world." This is precisely the challenge of our times: given our very ability to conceive of a world as different than it is, it's not a question of whether the 'Tangible' is dead or alive but how we choose to create and dispose of it.