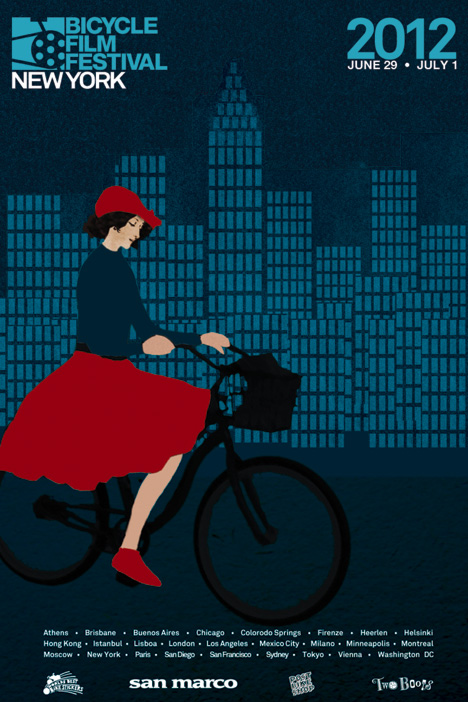 It's that time again: next weekend, June 28 – July 1, 2012, will see the perennial celebration of human-powered transportation known as the Bicycle Film Festival. Entering its second decade, the three-day extravaganza is the first of over two dozen festivals worldwide, and founder Brendt Barbur notes that this year's program might just be the most mainstream one yet... in a good way.

Brendt recently invited me to have a sneak peek at some of this year's films, and while I must admit that I've only seen a fraction of the programming that they've premiered over the 11 years, I can say, once again, that this year's BFF is not to be missed.

As always, the Anthology Film Archive is host to BFF New York, which predates the Red Hook Crit and New Amsterdam Bike Show as one of New York's original bike culture instutions. Yet the annual event remains relatively underground in New York—Barbur's forgone the parade in recent years because he's "sick of dealing with cops"—but it's gained traction in both world-class metropolises such as London and Tokyo and cycling-friendly cities like Minneapolis and Milan. (Barbur often works with city-level administrators, ministries of culture, etc., in international markets: he's looking forward to a warm reception at the next stop in Helsinki, the 2012 World Design Capital, and Estonia, where Sister Session was shot and produced.)

The irony, of course, is that the BFF was a catalyst in the rise of urban cycling culture the world over, and Brendt acknowledges the festival's roots in what was once considered to be a lifestyle choice: "Even in 2001, you'd wave at fellow cyclists [because we were so few and far between]." And while he hesitates to take credit for highlighting messenger (read: fixed gear) culture, it's safe to say that the Film Festival has been a vehicle, so to speak, for cycling enthusiasts and amateur filmmakers alike.

Even as the alternative is subsumed in the mainstream—NYC's forthcoming bike share is all but guaranteed to be a major turning point—it's worth hearing from someone who has not only witnessed cycling's growth in popularity but has presciently championed the cause.Steeped in the creative culture of early 00's NYC, Brendt started the BFF after he got hit by a bus on Third Avenue. He fondly recalls his first effort as "a healing thing," and it's clear that he could never have imagined that he'd be overseeing events in upwards of 40 cities a year. Originally limited a series of screenings and afterparties, the BFF eventually grew to include art exhibitions and concerts, a prodigious undertaking for the small-yet-dedicated permanent staff. Peaking with a 25,000-person NYC turnout in 2009, Brendt is looking to return to the festival's roots, keeping the street fair but leaving the satellite shows to passionate locals (the BFF works with local producers in each city, and they receive at least a few requests to bring the event to new locales every day).

The narrower scope will allow organization to be both more focused and more nimble, and the goal, now, is twofold. In concrete terms, Brendt is looking to be in 100 cities by 2014—not just major markets but anywhere that is accessible on two wheels. Yet this is simply a manifestation of his broader, rather less quantifiable ambition: to promote cycling as an end in itself.

As for the films themselves? I've been curious to see Line of Sight since the trailer (above) hit the web a few weeks ago. Directed by Benny Zenga, the controversial documentary is the culmination of ten years' of helmet-cam alleycat footage by Lucas Brunelle, and the hour-long film turns out to be more a portrait of the man behind the camera than the racers he pursues with reckless abandon. It's a subtle gift, one that is rather more obscure than the formidable skills of the riders themselves: his gaze remains remarkably focused as he navigates the broad avenues of Manhattan alongside alleycat champs—hence the title—to the point that he's drawn criticism for glorifying daredevil riding. (Brunelle nonchalantly mentions that the rig is "seven or eight pounds," and, as far as I can tell, he doesn't plan on switching to a GoPro.)

The filmmaker is unapologetic about his life's work, and while I do not condone many of the riskier maneuvers, I appreciate the unique athleticism and technical prowess of the competitors, captured with utmost candor. For what Line of Sight lacks in terms of narrative, the shamelessly visceral footage makes for an inimitable compilation, at once an artifact of bygone subcultures and a symptom of serial distraction in the Age of YouTube. (For several years, the Brendt restricted the posting of submissions; filmmakers now forgo online platforms prior to the BFF, which is the de facto venue for premieres.) If Line of Sight gets a bit mindless at times, this is precisely why the film is a worthy document of the alleycat experience: it's all but impossible to express how the riders' effortless aplomb is simply instinct—literally a matter of life and death at times.

The balance of the films are less aggressive in every way; as with last year, it's an accessible mix of playful, endearing and/or satirical shorts, organized into coherent programs by Brendt himself. If the niche appeal of the main feature runs contrary to Brendt's insistence that this year has broader scope than ever before, I'd say that it's less about bikes and more about individual experiences of the universal. After all, it was never really just about bikes: the BFF is about shared passion and bringing people together.