The Uyuni Salt Flats' Potential Effect on the World's Products

Thanks to the Internet, we can all see photos of Bolivia's beautiful Uyuni Salt Flats. But few of us will actually make the trek there, and fewer still will get to spend a night in the Palacio de Sal. Yet there is a third element of Uyuni that potentially affects each and every one of us reading this, whether product designer or consumer, and it's what's under Uyuni: Lithium. Lots of it. 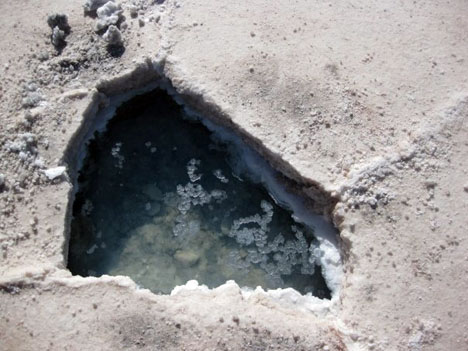 If you break through the salt crust of the massive Uyuni—which at nearly 5,000 square miles is some 25 times the size of America's Bonneville salt flats—you'll find an enormous brine lake. Bolivia is home to nearly half the world's supply of lithium, and most of Bolivia's supply is floating around in that brine lake. We're talking an estimated five million tons.

Lithium-ion and lithium-polymer batteries are currently a huge business, powering everything from cars to laptops to cell phones. It's conceivable that if the massive amounts of lithium were extracted from Uyuni, the prices of everything from Priuses to pacemakers, from ThinkPads to iPads, would drop. And relatively impoverished Bolivia could become rich in the process.

"We know that Bolivia can become the Saudi Arabia of lithium," activist and salt gatherer Francisco Quisbert told the New York Times in 2009. But as he insightfully added, "We are poor, but we are not stupid peasants."

Evo Morales, the political activist who has held Bolivia's presidency since 2006, is a man of the people and a champion of the poor. Despite entreaties from the likes of Mitsubishi—who estimates demand for lithium will increase five-fold in the near future, even for a tiny niche market, and that Bolivia's Uyuni holds the key to keeping it affordable—and other international conglomerates, Morales has been resistant to opening Uyuni's floodgates to foreigners. (American companies have reportedly been ordered by Washington to stay out of the wooing process due to political tensions.)

The big question is, when Bolivia needs the cash and these companies have the cash, Why?The answer is that Bolivia, like many other South American countries, has a history of foreign companies picking their natural resources—gold, silver, tin, oil—clean, and pocketing most of the profits, and is getting sick of it. "We will not repeat the historical experience since the fifteenth century: raw materials exported for the industrialisation of the west that has left us poor," Bolivia's Minister for Mining, Luis Alberto Echazu, told the BBC several years ago. "We want to send a message to the industrialized countries and their companies."

For now, the only people doing any digging at Uyuni are locals, like the native Indians whom Morales allows to gather and sell salt to support themselves. Their small-scale efforts can't make a dent in Uyuni, and Morales is keen to develop a local plant that can harvest lithium in an environmentally-responsible way that will see the profits swell local, not overseas, coffers. 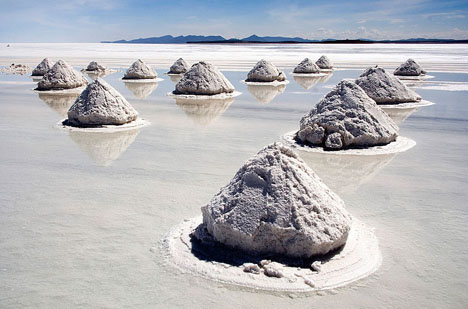 The process is likely to take quite some time, and that delay may slow the global uptake of hybrid vehicles. "The car manufacturers will have to strike a balance," a mining analyst told the BBC, "between how quickly they manufacture with the supply of [lithium] because they don't want to drive the price up to such an extent that the cars get priced out of the market."

Whether you're for or against Morales' decision, you have to admit it takes guts.

We'll leave you with a relevant song:

The Uyuni Salt Flats' Potential Effect on the World's Products