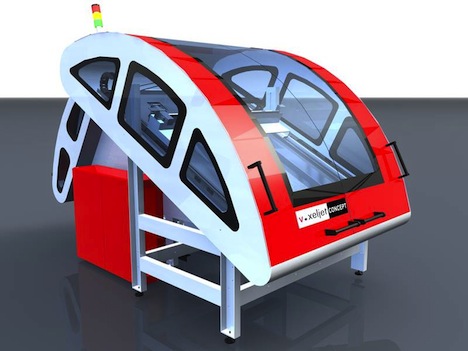 If there ever was a major leap in the evolution of the 3D printer, the voxeljet Concept is the benchmark machine to follow. In the explosive arena of start-ups that produce innovative 3D-printers, voxeljet has decided to challenge and change the direction of how 3D printers work. Taking a look at three specific factors that set this process apart from others on the market, it becomes quite clear just how revolutionary this concept is.

At a layer thickness of 150 to 400 microns, the resolution is decent when compared to others 3D printers but it is worth noting that this is still in the concept phase so there is the possibility to improve the layer thickness.

Continuous 3D-Printing Technology represents a new dimension in the manufacturing of moulds and models without tools. With its big advantages compared to conventional standard-3D-printers VX concept is a pioneer for a whole new generation of machines. The length of the moulds is virtually unlimited with this type of system as there is no restriction to the length of the belt conveyor. The usable build length is only limited by the manageability of the moulds. Furthermore, the tilt of the print level enables the print head to take far less time for positioning movements, which improves the print speed. Apart from the technological highlights, users will be pleased with the investment and operating costs because they are lower than those of conventional systems. With the continuous printing system, there is no need for a build container or separate unpacking station, which has a positive effect on the purchase costs. The printer also scores points with its high re-use rate for the unprinted particle material, which is returned straight to the build zone from the unpacking area. Consequently, the machine requires smaller filling quantities and incurs lower set-up costs.

Check the promo vid after the jump...

The voxeljet adds a whole new possibility with the ability to produce a larger number of mass-customized products. The notion of using 3D printed models as the only source of fabrication for manufactured models is still too costly, but with the voxeljet, we approach the tipping point in that it allows for the best of both worlds. Additive manufacturing as a process has less waste as when compared to its subtractive counterpart. There is also no increase in cost when it comes to the complexity of geometry in additive manufacturing. Coupled with an extra long support bed out the other side, it becomes quite clear that a customized, on-demand future is just that much closer.