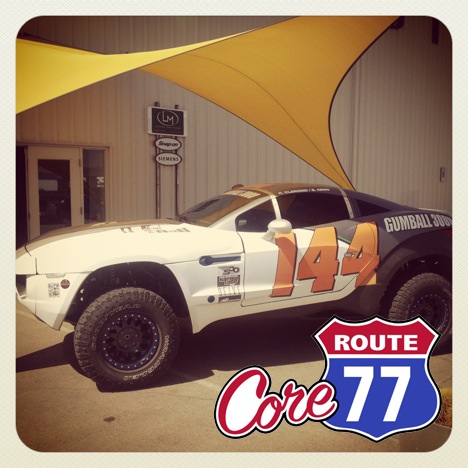 After working his way through the South, Dave talks with innovators of the automotive industry in Phoenix and Los Angeles. Keep up-to-date with all of the adventures on Route 77 by following @DaveSeliger on Twitter! 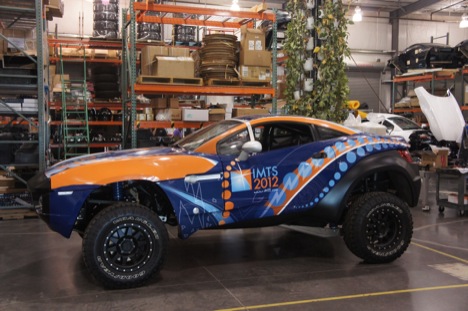 The newest generation of the Rally Fighter

I was very excited to find out that Local Motors, a crowd-sourced car company, was based out of Phoenix, AZ—right in the middle of my four days driving through the desert. Local Motors released the first generation of the Rally Fighter in 2010 and is now rolling out the second generation. The company has also hosted design competitions for a variety of clients, including DARPA and Peterbilt. However, Local Motors faces stiff criticism that the company is effectively lowering the value of designers through their design competitions. I sat down with Local Motors' Adam Keiser and Alex Fiechter to learn how the company is attempting to disrupt the auto manufacturing industry through crowd-sourced design, as well as increase the value of designers along the way. 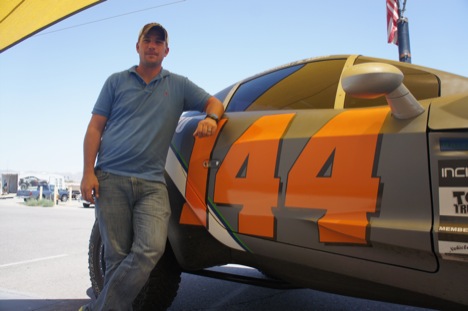 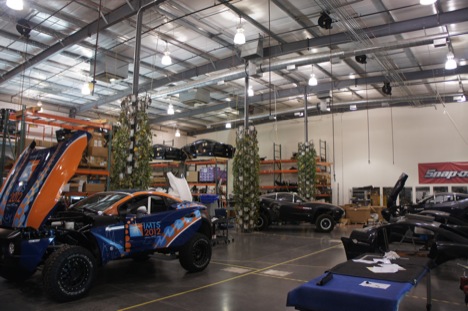 Local Motors CEO Jay Rogers initially came up with the concept for a community-driven (no pun intended) car design company while a student at the Harvard Business School. The point behind having a community—called the Forge—design a car is to have them design the car they would want to buy and then make that car a reality. In this way, Local Motors has an established niche market before the car is even produced. This is in stark contrast to the current paradigm of auto manufacturing. "You can't walk into Ford or GM and say, 'I want a car exactly how I want it designed,'" said Keiser. Moreover, Local Motors is set-up to have an extremely quick turnaround from initial sketches to a working prototype; in the case of the Rally Fighter, this timeline was only 18 months. 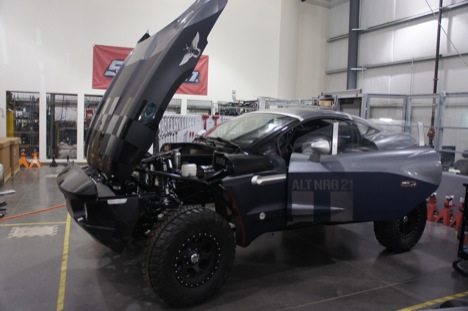 The first generation of the Rally Fighter 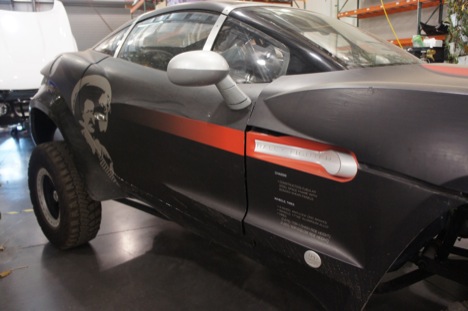 At the very foundation of this business model, though, is having a dedicated community of designers and engineers that will design whatever this car is. Fiechter argued that the compensation for the winning designer is more than fair. In the case of the Rally Fighter, winner Sangho Kim received $10,000 when Local Motors started to develop the car. The implicit understanding is that the prize money is representative of Local Motors purchasing the designer's IP. Given that each competition only lasts for 3 to 4 weeks, and that a majority of competitors are students or recent graduates, "that's pretty significant compensation for that amount of time," said Feichter.

Ride along after the jump...

Local Motors fully understands that the company's success depends on the willingness of the community to participate. An industry like the automotive one automatically draws a large community interested in having input and designing the next big product due to the cool nature of cars themselves; there's perhaps a less excited community interested in designing, say, the future of HVAC. To that end, Feichter made it clear that protection of IP is a current goal in further developing the Forge's participation. "We're trying to take care of protection for you and act as a buffer," said Feichter, "so that you can just focus on design." Yet having the company that will ultimately be buying the IP acting as the protector of the IP is a concept that should raise some eyebrows. 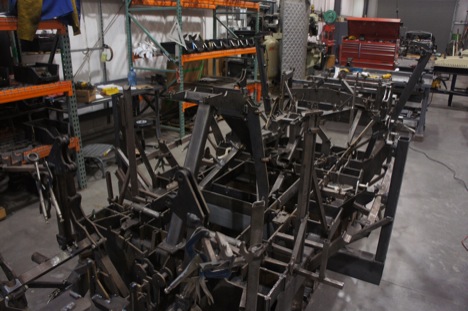 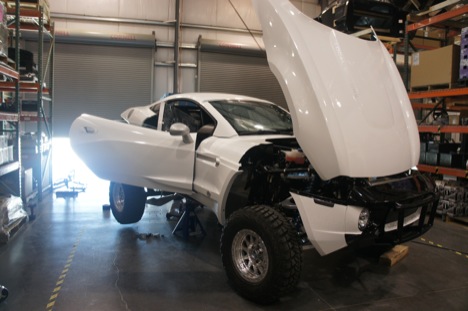 Even the Prince of Dubai bought a Rally Fighter

However, "the biggest thing that's eating at us," said Fiechter, "is that we want to recognize more people in a way that's more meaningful than, 'Hey, you got 7th place.'" Fiechter described that the end goal of crowd-sourced design is something more along the lines of open-source coding. These projects tend to facilitate the ideal collaboration because the only motivation each of the participants has is to create the best possible code and product; there's no monetary reward to fight for. Local Motors actually has an open-source car project currently running on the Forge community called Open Tandem with the goal to design a kit car for under $10,000 that anyone can build in their garage. Anyone who contributes will receive the plans to build the car for themselves. The collaboration Local Motors is seeing on the project is exactly what the company would like to replicate for the competitions, but the question still remains, "How to make this happen when money is involved?" 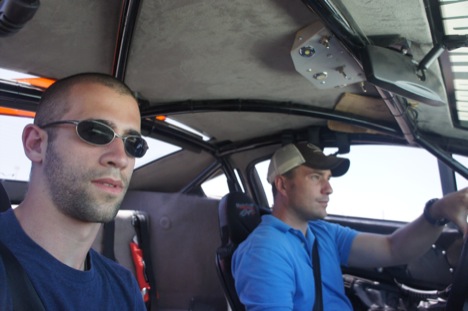 Your humble writer has his mind blown 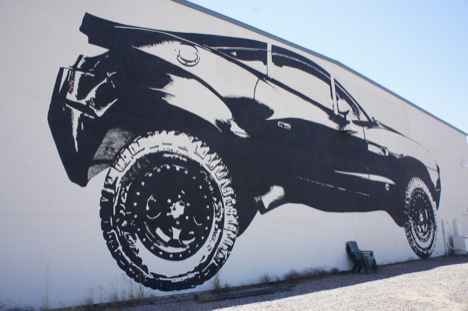 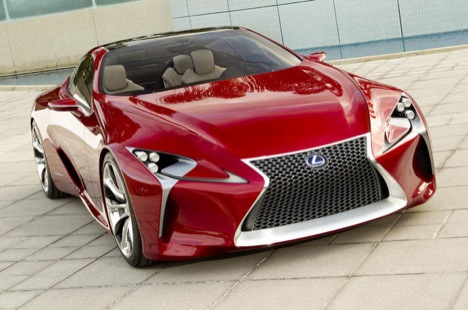 When you get invited to Calty Design Research, Toyota's powerhouse concept car studio outside of Los Angeles, you really can't say no. The design studio is responsible for setting the tone for the future of the Toyota, Lexus, and Scion brands. I sat down with Alex Shen, Edward Lee, and Ben Chang, three of Calty's designers, to talk about the future of the automotive industry.

In the wake of the economy and a rapidly changing world, Toyota has become very reflective on its past, both the huge successes of early years and dismal failures in the last few decades. "Our cars are pretty boring," admitted Shen, Calty's Studio Chief. Cars have become more of a personal transit option and less of a powerful machine that teenagers worship. "Cars used to represent high technology," said Shen. "Now it seems like we're falling behind, always chasing the latest technology." Shen described Akio Toyoda, Toyota's current CEO, as a "car nut" who is interested in the rebirth of the company. "Toyota Reborn," as the slogan goes, seeks to embrace Toyoda's saying of "Waku-Doki" or "excitement and adrenaline." 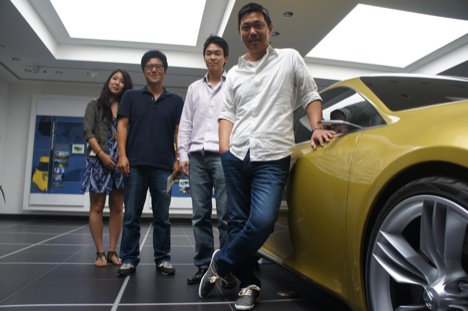 Unlike Local Motors, where the company's cars are almost entirely the product of a vocal community, Shen suggested that failures in recent years may actually have stemmed from "really listening to the customers, maybe too much." This is not to say that customers don't have helpful input, but rather that "customers are talking about today—to be innovative, we have to take their opinions and project eight years outwards." Instead of pursuing next generation car design, Toyota designers focused on research data and designed cars that would satisfy the largest market volume. The solution to this problem is to "use more instinct in design, utilize our designers' interesting backgrounds, and just create from the soul."

This approach to car design may seem fickle in contrast to the rigorous design research trend I've come across when talking to other designers on this road trip, yet Calty's award-winning Lexus LF-LC is an example of this purist approach. Although many projects have strict guidelines, Toyota tasked Calty with redefining the Lexus brand. The resulting concept car harnesses what Shen described as the Japanese ideology of "the harmony of opposites." The LF-LC is a technologically advanced design achieved through organic forms. Although the process behind designing the LF-LC was not as simplistic as the video makes it appear, designers Lee and Chang really did follow their instincts to create the absolutely beautiful final product. 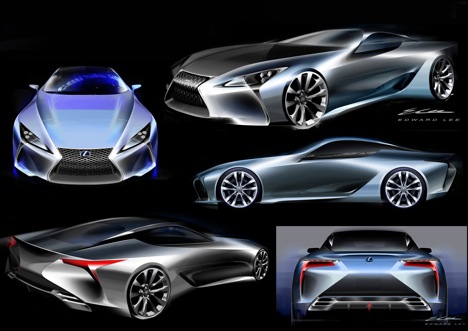 And Toyota is increasingly handing over the reins to Calty to plot the course for the future of the company. A wall in the lobby of Calty shows a visual timeline of the concepts to come out of the design studio; the last poster is actually too small to show all of this decade's projects. Shen estimated that 75% of Calty's concepts "influence or become an actual car down the road." Calty also designed the FUN Vii, a concept car for Generation Z that replaces older generations' idea of the car as about freedom with one about personalization and expression. 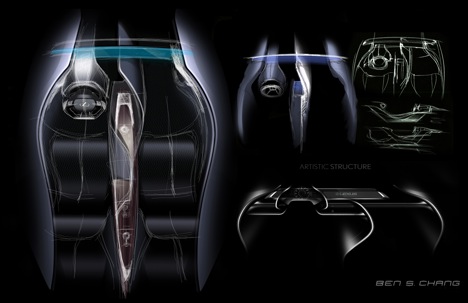 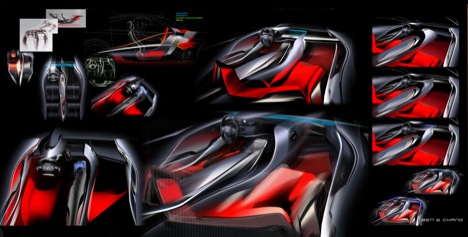 Echoing a sensibility I've seen in a number of designers on this road trip so far, Shen described the evolving generalist nature of the designer. "We become psychologists, archeologists, and the jack-of-all-trade at some point," said Shen. Now and in the future, designers must be well-informed about a variety of topics, not just their specific profession. "But it's up to designers to filter what they need to get the best result," said Shen, whether this means an automotive designer turning to music or an architect turning to graphic design. 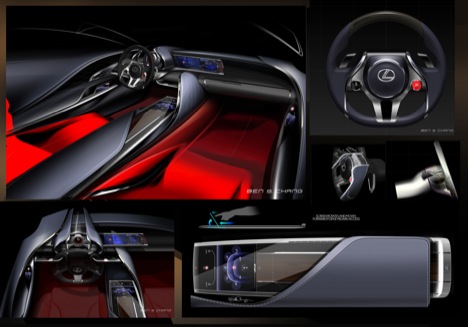 Special thanks to Joo Lee and the Saruwataris!