More Than Meets the Eye: "LumaHelm," a Gesture-Controlled, LED-Embedded Helmet 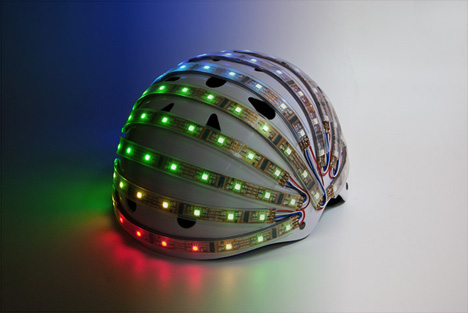 A nod to Daft Punk?

Don't be fooled by the pictures, this light-up headgear is more DIY tech than discotheque. The brainchild of Wouter Walmink, Alan Chatham and Floyd Mueller of RMIT's Exertion Games Lab, the "LumaHelm" certainly isn't the first bicycle illumination concept we've seen, but it might be the smartest one... not least because it's attached one's cranium as opposed to one's conveyance (no offense to Mitchell Silva et al). The prototype is an off-the-shelf helmet that's been augmented—at once hacked and adorned—with several LED strips, such that the array of 104 multicolored lights is mapped evenly onto the hemisperical surface (they left the padding intact to ensure that it still meets safety standards). An accelerometer serves as an input for Processing via Arduino: deliberate motions of the head activate corresponding sections of the surface, approximating left and right turn signals, as well as braking (with a quick backwards tic). A translucent vacuum-formed shell serves to protect the LEDs and diffuse the light they emit. 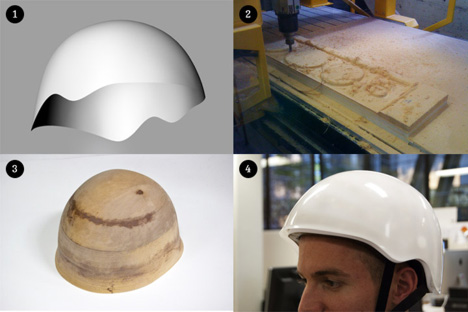 While the safety applications of the LumaHelm are obvious, the designers abide by a broader outlook, emphasizing the potential of light as a medium for expression.LumaHelm turns the helmet into a display through which we can communicate, express and play. We are exploring how this can make cycling safer, skateboarding more expressive, improve communication on construction sites, and affect any other activity requiring a helmet. Through this design and research process we want to find out what wearable technology in the future may look like and how it can be more intimately integrated in our everyday lives.

In an interview with ABC Radio, Walmink notes that the materials cost them about $400 and that they're planning on releasing instructions so that the average DIYer have the means to make their own LumaHelm. And while commercial availability is still a long-term goal, he comments that an LED-embedded hardhat might bypass the noise issues specific to construction sites as a new form of communication. 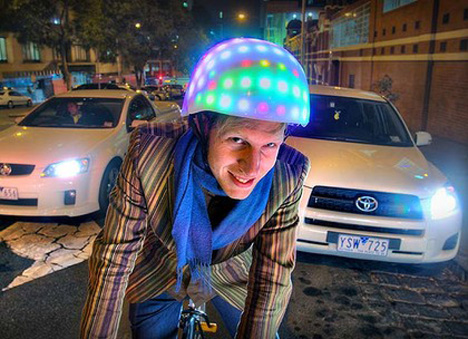 Photo by Craig Sillitoe for The Age Thus, the project is as much a thought experiment as a cycling solution, a new way to broadcast our thoughts in an RGB dot matrix that happens to enclose their very source.The team has posted several videos; here's one of Walmink explaining the LumaHelm to a team from Audi (not pictured).

Thus, the project is as much a thought experiment as a cycling solution, a new way to broadcast our thoughts in an RGB dot matrix that happens to enclose their very source.

The team has posted several videos; here's one of Walmink explaining the LumaHelm to a team from Audi (not pictured).

The lab itself is a practically-oriented thinktank that explores "future of gaming in order to understand how to design better interactive experiences, in particular games that require intense physical effort from players." In keeping with this unique approach (and the competitive nature of gaming), their last project was a rear-facing heart rate monitor for cyclists, designed to motivate a pursuer as opposed to the rider him or herself. They've incorporated a Zephyr BioHarness sensor into the LumaHelm as well, such that the canny casque can pulse in sync with a rider's heart rate. 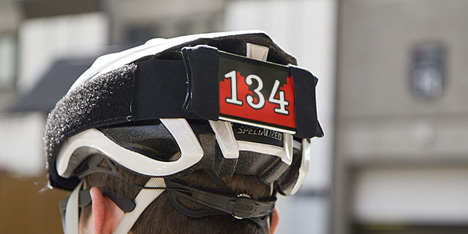 Not to digress, but I personally am ambivalent towards helmets: I feel that they're strangely dehumanizing—based on the premise that cycling is an inherently dangerous activity or, worse, that we're a different breed entirely—in the same way that requisite padding makes football and hockey players seem superhuman. (These are fundamentally violent activities, for which safety equipment is indeed paramount, but helmets allow viewers to dissociate the fact that these are highly-trained human beings who are engaging in a sublimated form of war.) Which is a long way of saying that I agree with the designers' suggestion that the visual cue of a heartbeat could go a long way towards 're-anthropomorphizing' cyclists:Furthermore, LumaHelm can also visualize heart rate to make other (road) users aware that the helmet wearer is a fragile human being and makes visible to others that the wearer invests physical effort. Increased physical effort can lead to decreased attention, hence the LumaHelm makes visible that cyclists might not be in the same bodily state as their fellow road users such as car drivers, hopefully contributing to a better understanding of each other's different needs, furthering the appreciation of each other.

I'm not sure where the Toyota Prius × Parlee × DeepLocal (× Prolly) concept bike project left off, but I'd be excited to see some (cross-Pacific) cross-pollination between the Exertion Games Lab and the folks behind the neuron helmet. I can't wait until I can shift, signal and brake with my mind alone...