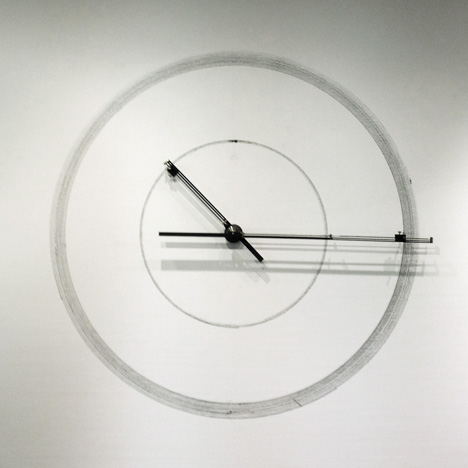 "Drawing the Passage of Time" by Niek de Snoo; photo by Ray Hu

When What Is Natural for Some Is Not for Others: Culture and Design

I was in Asia, giving a talk. I was given a remote controller for advancing my slides. This one had with two buttons, one above the other. I dislike traditional slides with long streams of text that the speaker reads to the audience, so I have a rule: "No words." Most of my slides are photographs. I was all ready for the first photograph, but when I pushed the upper button to advance to the slide, I was flustered: I went backwards through my slide set, not forward.

"How could this happen?" I wondered. To me, top obviously means forward, bottom backwards. The mapping is clear and obvious. If the buttons had been side-by-side, then the control would have been ambiguous: which comes first, right or left? It isn't clear. But this controller used the correct mapping of top and bottom? Why was this control designed incorrectly?

I decided to use this as an example of design for the audience. I showed them the controller and asked: "to get to my next slide, which button should I push, the top or the button?" To my great surprise, the audience was split in their responses. Many thought that it should be the top button, just as I had thought. But a large number thought it should be the bottom.

What's the correct answer? I discovered that as I asked this question around the world that some people firmly believe that it is the top button and some, just as firmly, believe it is the bottom button. Each is surprised to learn that someone might think differently. Who is correct? Both are.At first I was puzzled, but then I realized that this was a point of view problem: does the person move forward to the next slide (top button) or do the slides move toward the person (bottom button)? I remembered that different cultures view time in this same way: in some cultures, time is represented mentally as a kind stretching out ahead of the person and the person moves forward along the time line. In other cultures, there is the same representation, except now it is the person who is fixed and it is time that moves: an event in the future moves backwards toward the person. The metaphor determines how the world is perceived, and for designers, the metaphor determines whether it should be the top or the bottom button that selects the next slide: the top button of the person moves forward, the bottom button if it is the slides moving backwards.

It turns out that life is even more complex. Some cultures (Mandarin Chinese, for example) often represent the time line vertically. Other cultures have rather different views. For example, does the future lie ahead or behind? To most of us, the question makes no sense: of course, the future lies ahead - the past is behind us. We all speak this way, discussing the arrival of the future and pleased that many unfortunate events of the past have been "left behind."

But why couldn't the past be in front of us and the future behind. Consider this: We can see what is in front of us, but not what is behind just as we can remember what happened in the past but we can't remember the future. Not only that, but we can remember recent events much more clearly than long past events, captured neatly by the visual metaphor in which the past lines up before us, the most recent events being the closest so that they are clearly perceived (remembered), while long-past events are far in the distance, remembered and perceived with difficulty. If time is displayed along a horizontal line, does it go from left to right or right to left? Either answer is correct because the choice is arbitrary, just as the choice of whether text should be strong along the page from left to right or right to left is arbitrary. Turns out, though, that the choice of text direction also corresponds to people's preference for time's direction. People whose native language is Arabic or Hebrew prefer time to flow from left to right (the future being toward the right).

The choice of metaphor dictates the proper design for interaction. Similar issues show up in other domains. Consider the standard problem of scrolling the text in a window. Should the scrolling control move the text or the window? This was a religious debate in the early years of display terminals, long before the development of modern computer systems. Eventually, there was mutual agreement that the cursor arrow keys—and then later on, the way a mouse would move the window scroll bars—would follow the moving window model. When reading text, when the eye got to the bottom of the screen, one moved the window down to review more text, but since in fact the window was firmly fixed by the hardware, the display would show this by moving the text upwards: move the hand down and the text moved up.

In cases where the metaphor was to "grab" the visual image, the motion was the opposite: graph the image and move it in the direction you wanted it to move. In this case, to see more text below what was visible on the screen, grab the text and move it up. Now one moves the hand upwards to see what is lower.

People accepted these conventions quite naturally, so for over a decade this has been the convention. But today, we are switching again, now that we no longer move scroll bars but use gestures to move the text.

In all cases, every view is correct. It all depends upon what you think is moving.

But wait: I'm not finished. In some Australian Aborigine societies, compass direction is dominant, based on the directions in which the sun rises and sets). Give someone from this community a set of photographs structured in time (for example, photographs of a man aging or a child eating some food) and ask them to order them, and the traditional westerner would order them from left to right, newest photo to the right. But people from these Australian communities would order them east to west, newest to the west. If the person were facing south, the photo would be ordered left to right. If the person were facing north, the photos would be ordered right to left. If the person were facing west, the photos would be ordered along a vertical line extending from the body outward, outwards being the most recent. And, of course, were the person facing eastward, the photos would also be on a line extending out from the body, but with the most recent photo closest to the body.

What does all this mean for design? Good question.

I am indebted to Lera Boroditsky for her research on metaphors of time (and for her willingness to discuss it with me).

Boroditsky, L. (2011). How Languages Construct Time (PDF). In Dehaene and Brannon (Eds.), Space, time and number in the brain: Searching for the foundations of mathematical thought. Elsevier.

Don Norman claims his goals in life are to make a significant difference, but to have fun while doing so. he established the Design Lab at the University of California, San Diego which he grew to become a major center for design with a focus on the application of human-centered design principles to complex sociotechnical systems, such as healthcare and automation. He is both a businessperson (VP at Apple, Executive at HP and a startup) and an academic (Harvard, UC San Diego, Northwestern, KAIST). As co-founder of the Nielsen Norman Group he serves on company boards and helps companies make products more enjoyable, understandable, and profitable. He is an IDEO Fellow and a member of the National Academy of Engineering. He gives frequent keynotes and is known for his many books including "The Design of Everyday Things," "Emotional Design," and "Living with Complexity" (which argues against simplicity), and a completely revised, updated edition of "Design of Everyday Things." He has now retired from that position (his 5th retirement, the 2nd from UCSD), and is hard at work reforming design education and, of course, writing a book.