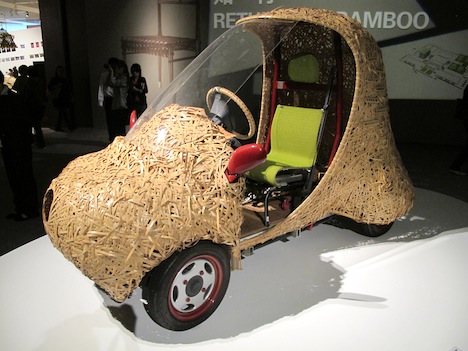 In February this year I decided to give up a cozy life in West London and move to Qingdao, China, to head up the first overseas office for one of the world's leading industrial design consultancies, Priestmangoode.

In recent years the design industry has become less narrowly focused on the West and increasingly global. From Sao Paulo to Beijing—which will be running its second Design Week later this year—design hubs are now dotted all around the world.

This is not so much a shift away from the West, but the creation of new design centres (especially in emerging markets) where previously there were none. The opportunities presented by this combination of rapid development (and nowhere has it been more rapid than in China) and the West's long history of using design, promise to be very exciting. It is wanting to be right at the meeting point of these two design cultures that motivated me to come to China in the first place: to both observe and have a part in shaping what will hopefully be a more globally inclusive industry.

At Priestmangoode, we have already been working in China for several years, and whilst there are some similarities between the way things are done there and in the West, there are many differences too. The scale of many of China's projects and companies is impressive (Qingdao is home to the world's longest bridge over water, electronics giant Huawei is the word's second largest supplier of mobile communications infrastructure, to name just two examples) but what is perhaps more interesting is the speed at which projects are completed and products launched.

Not unlike some other Asian electronics companies, the approach of many Chinese manufacturers is often to launch several models of a particular product type in quick succession, each either building on the last or exploring a different market niche. Whilst this does lead to vast product portfolios, and some lapses in quality, it does mean that the needs of small, otherwise alienated, consumer groups can be met, and products refined 'in-use', a process we are unfamiliar with in the West.

There are merits to both this approach and the West's focus on quality of choice rather than quantity, and the potential for a mutually beneficial exchange of knowledge is very promising for the future of design.

This column will explore these and other issues surrounding not just design but also living and working in China. It is not meant to be a systematic portrait of, or be the defining authority on, doing business in China. Its intention is to provide some insight into the Chinese design industry from someone on the ground, as well as the differences in office culture and work ethic. I will consider the value of design in China, how consumer culture is so completely different and what misconceptions we have (and bad advice we are given) about working in China.

China is actively trying to shed its image as a country of cheap manufacture. Rather than 'Made in China', the future lies with products that are 'Designed in China'. I will be looking at how and where the changes necessary for this to happen manifest themselves. I will also be considering what challenges face a country with such vastly different regions when trying to establish a distinct design identity, more or less from scratch.

In doing so I hope to bring a little objective clarity into a fast-changing industry in a fascinating country, dropping in any interesting observations, thoughts on my favourite places and things to do in China along the way.