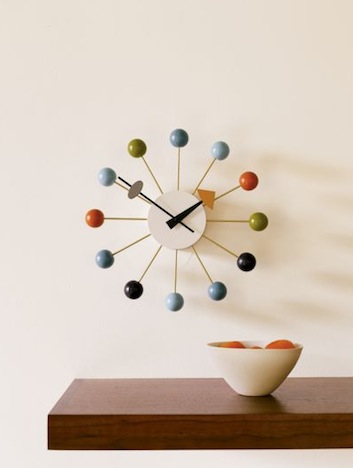 Like so many others, I have been lusting after George Nelson's cheerful Ball Clock ever since I was old enough to have an appreciation for such things. Nelson designed the piece for Herman Miller, where he worked as Design Director for over twenty years while he ran his own design studio, George Nelson Associates. His work for both companies comprises many examples of of the 20th century's most iconic Modern furniture, much of which is now on view in the Cranbrook Art Museum's exhibition "George Nelson: Architect, Writer, Designer, Teacher."

Organized by the Vitra Design Museum and sponsored by Herman Miller, the exhibition marks the first comprehensive retrospective of Nelson's work. It's been making its way around Europe, and this stop in Michigan is the last chance to see it stateside before it goes back to Germany after the exhibition closes this Fall. More than 120 objects and over 50 historical documents including drawings, photographs, architectural models and films are on view at the Cranbrook Art Museum, a three hour drive from Herman Miller's Zeeland outpost where Nelson spent what we might call his formative years. Certainly, they were the formative years of Modernism, an aesthetic that reached as far as Europe and as close as Cranbrook University, where his influence was very much felt. 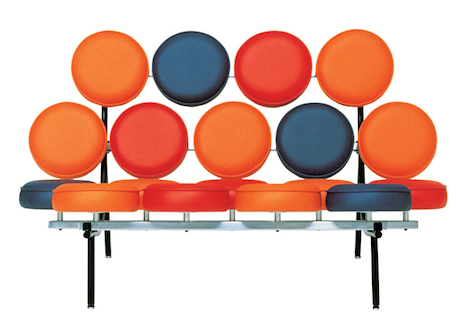 But it wasn't just his furniture and design objects that made an impact. Nelson co-authored Tomorrow's House with Henry Wright, in which they introduced the idea of a 'family room' and a 'storage wall,' a recessed bookcase that capitalized on the previously unused space between walls. And despite the controversy surrounding the credit for the Marshmallow Sofa and the Action Office, Nelson remains a pioneer not only in individual object design but in rethinking the manner in which we ought to live, showing how good design can make for a happy, harmonious live or work environment.