We've been fans of Outlier since they first launched, and as designers, cyclists and 21st-Century urbanites, we're duly impressed with Abe and Tyler's continued commitment to innovation in apparel and accessories. (I have no shame admitting that I've been living in my Three-Way Shorts this summer.) The Brooklyn-based brand has built an ever-growing cult following over the years—for the uninitiated, co-founder Abe Burmeister's PSFK talk is a good place to start—and we're pleased to present an inside look at their rigorous design process. 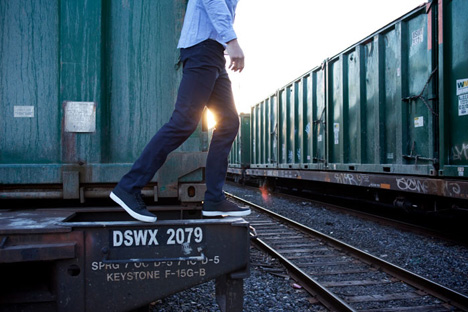 What does a 21st century pair of jeans look like?

That was the key question we asked ourselves as we started designing the Outlier Dungarees. Jeans are an amazing style of pant, and there's a reason they are wildly popular over a century after their invention. But we were pretty certain that they could be made better, considering that they'd barely evolved since 1873 when the first pair was patented. Jeans are durable, comfortable and good-looking, but they also tend to be heavy and restrictive, with a tendency to feel hot in the summer yet cold in the winter. Since they're made of cotton, they handle moisture rather poorly: when they get wet they stay wet. The more we thought about jeans, the more we knew we had a design challenge on our hands. 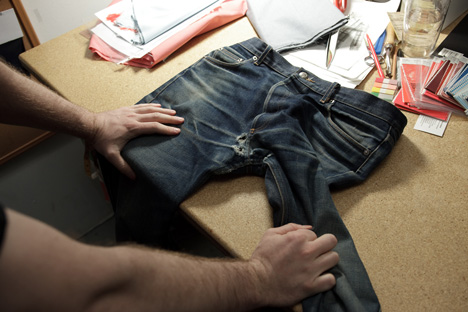 Another key factor for us was the way jeans wear when cycling. Outlier is not a bike company in any way shape or form, but our first product, the OG Pants, were designed as 'ride to work' pants. Jeans are particularly ill-suited to cycling: they're prone to what's known as 'crotch blowout,' a combination of symptoms that all stem from the fact that jeans simply are not designed to handle the repetitive motions of bike riding. We already had a bit of expertise with these issues, and more importantly we firmly believe that cycling is a key means of transportation in the 21st-Century city, so we wanted to ensure the pants we created could handle that pressure. 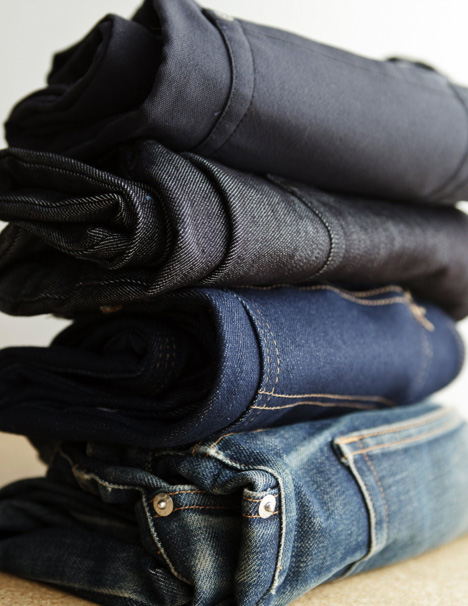 THE FABRIC PAST: DENIM

The first point of focus was the fabric. The core of any classic jean is denim, a 400-year-old fabric. Since fabric technology has evolved far faster than garment construction technology over the past century, it was natural to start by trying to make a better fabric.

Denim is not that complex of a fabric. It is a cotton twill that differs from, say, your average khaki fabric in two key ways. First, it tends to be significantly heavier than any other common fabric used to make pants. Second, it is yarn-dyed; the color of the fabric is created by using different colored threads in the weaving process (as opposed to using undyed threads and then dyeing the fabric after it is woven).

One of the cardinal aspects of our design process is narrowing down the problems. Often we make very explicit decisions not to address certain problems. We do this in order to prevent feature creep and narrow our focus on a few key issues. With the dungarees, we decided not to worry about the visual aspect of denim and to focus on finding a fabric that improved on the uniquely durable/comfortable character of jeans. 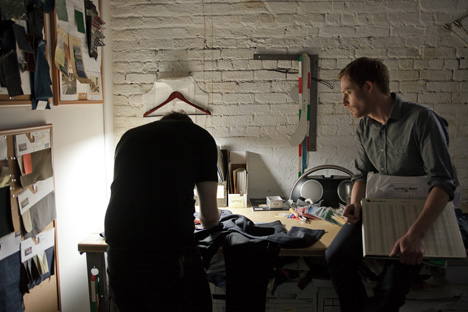 The fabric hunt is one of our favorite activities at Outlier. When we started the company, we were outsiders to the world of fashion and apparel. We couldn't find the clothes we wanted and set about trying to make them. One of the first things learned is that conventional clothing companies are too conservative and too cheap to use really good fabrics. There is a whole world of highly engineered technical fabrics that never get used in consumer grade clothing and once we discovered it we dove in deep.

But that was just half of it; truth is, we already were using fabrics that met that criteria. What we also needed was a fabric with structure. Unlike most fabrics, denim doesn't really drape as much as it "breaks"—there is an angularity to it that sets it apart and makes it feel durable and tough. 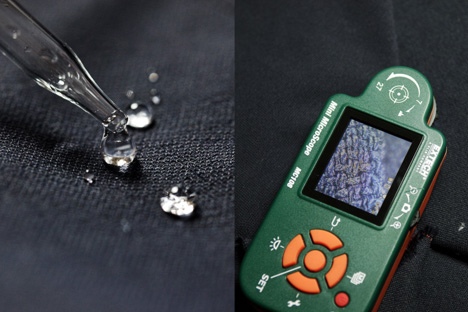 Now that we knew what we wanted, we naturally turned to our friends at Schoeller Textiles in Switzerland and Seattle. When it comes to technical fabrics, Schoeller stands a step above just about everyone. Schoeller had been supplying us with the 4Season fabric we used in our OG Pants and we sat down with them to try and figure out what we could make work for our 21st century dungarees.

Schoeller has a couple key specialties that were reflected in our 4Season fabric. They make the best four-way stretch fabrics on the market, as well as amazing doubleweave fabrics. Doubleweaves use a complex weave structure to create fabrics with radically different properties on both sides. For example, our 4Season fabric uses extremely durable air treated nylon 6-6 yarns on the exterior and a loosely woven soft polyester on the interior. This creates a double-faced fabric that is dense and strong on the outside with a 3D structure similar to a seersucker on the inside. This structure helps minimize contact between the skin and fabric, resulting in a much more breathable material. As great as the OG fabric is, though, it still lacked the denim structure we were looking for. What could we do to translate all the benefits of a doubleweave into a more structured fabric suitable for a 21st century version of a jean?

It took some time, but what we homed in on was a doubleweave canvas. Canvas has traditionally been a slightly tougher fabric than twill: as the story goes, Jacob Davis' original patented rivet pants from 1873 were made of canvas rather than denim, but the miners found it too rough on their skin. The doubleweave construction was the perfect solution—our fabric could have a tough canvas outer face made from premium nylon, coupled with a far softer interior weave made from gentler fibers.

To make it even better, we added Schoeller's proprietary Nanosphere treatment. Most fabric treatments work on the micro level, bonding to the surface of the fabric itself. As the name implies, Nanosphere works on the nano level, bonding to the actual fibers inside the fabric, creating a "self-cleaning" surface that emulates a lotus leaf. This leaves the pores of the fabric open to maximize breathability while retaining a substantial amount of water and dirt resistance.

Stronger and lighter, drier and more comfortable, we had our fabric. Time to make some pants. 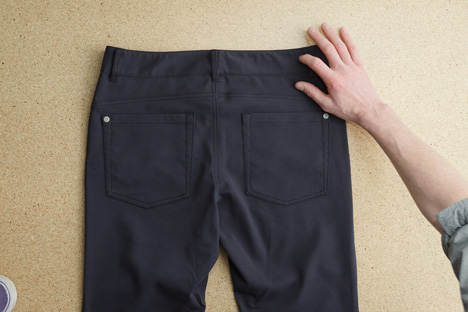 When we think about cut at Outlier, we focus on two things, the visual and the visceral. Like most clothing companies, we want cuts that look good. But we're also concerned—obsessed, even—with motion. How does the clothing move on the body? How does it feel when you move? Does it constrain certain motions? Enable others? One of our prime tenets is that clothing should be liberating, how you get dressed in the morning should not constrain what you do throughout the day.

In our earliest pants, notably the OGs and the Climbers, we relied primarily on using four-way stretch fabrics to liberate movements. With the dungarees we made an explicit trade off, sacrificing four-way stretch in exchange for more structure in the cloth. As a result, we would need to address movement on a core level, in how the garments are actually cut and sewn together.

We identified two specific areas as problematic: the crotch and the seat. The crotch was primary. In your standard jeans cut, four pieces of fabric intersect at the bottom of the crotch, creating a bulky square of fabric that just doesn't hold up to the repetitive motion that cycling generates. We addressed this issue by borrowing a detail from climbing pants: a gusseted crotch.

A gusset is a diamond-shaped piece of fabric that cleaves the problematic crotch seam in half like the Gordian Knot. Rather than one massive seam where four fabrics intersect, it distributes the stress between four strategically-placed seams where only three fabrics intersect. It both removes an uncomfortable lump and also transmits the forces generated by cycling legs into four times as many places, allowing for a much wider range of leg motion.

The other major cut change we made was more subtle. We added a reverse yoke to the rear of the pants. Traditional jeans are cut to only add room in the center rear of the pant to allow your rear to fit. Unfortunately, most of our rears are actually two parters: you don't need more fabric in the center, you need it on either side. By reversing the yoke, a technique inspired by mountain biking shorts, we were able to shape the fabric around the rear in a way that both looked better and moved better.

Finally, we needed to deal with the fact that not all men's bodies are the same. In an ideal world everyone would have bespoke clothes made just for their build, but we don't quite have that luxury. As a small company we came up with two variations. A Slim Dungaree cut designed for men with relatively straight hips, and a Keirin Cut Dungaree for men with a more athletic build. 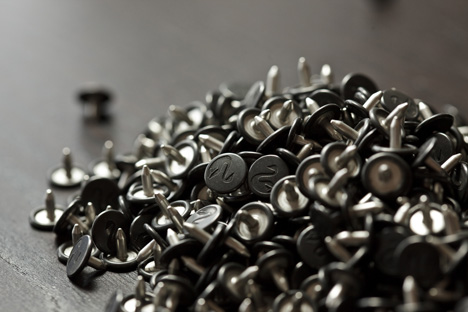 Every detail is important to our garments, so we put as much thought into the trim and finish as we do on the fabric and cut. Sometimes it's easy; we'd already used lots of heavy duty American made T-60 thread, all we needed to do was pick the colors. The water resistant Supplex pocketing we used in our shorts made perfect sense for the dungarees, as well as the metal YKK zippers. Rivets, on the other hand, could fill another case study. It took months of drama and setback before we finally settled on the simple Italian brushed stainless steel ones in use today. No logos on the outside, just a simple swan on the interior to show that we stand behind our work. 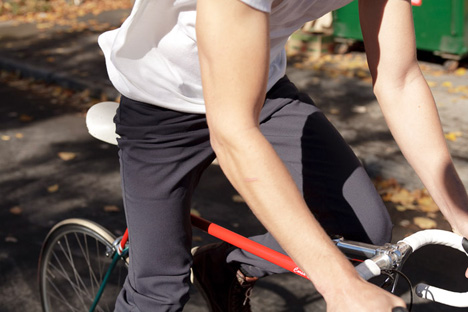 At Outlier, we believe every garment needs to be tested, and that the best way to test it is to wear it.

As we grow we've begun to use more traditional fabric testing labs, but we still have more faith in experience than a set of numbers. That means you actually need to wear the clothes. Unlike most clothing companies, we are huge believers in iteration. We make pants, fit them and wear them and then make new versions. Then we do it again. And again. And again.

One of the simplest things we do is just have people jump on their bikes. One of the earliest dungaree samples looked nearly perfect when we put it on the fit model for a sampling. Visually, we'd nailed the cut; there was nothing more to do. But then we asked the model to squat and then run—it felt ok, but maybe a bit tight. So we grabbed a bike and sent him out for a spin around the block. He didn't look too happy when he returned. This version didn't have the gusset in it, and that was when we knew it was necessary.

So we went from what we thought was a perfect cut to start again. It took another five or six iterations before we got it looking that good again. But the important thing was that not only did it look great, it felt fabulous and moved completely freely in any situation. The Outlier way. 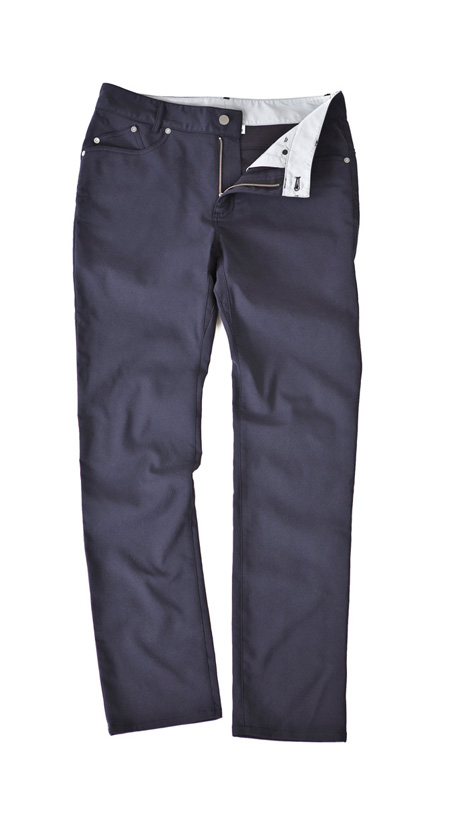 The Outlier Slim Dungarees and Keirin Cut Dungarees are available through Outlier's webshop for $188. New Yorkers are invited to stop by Outlier Open Studios every Friday from 4–7PM in July.