A Very Large Painting of a Very Tiny Thing: The Atlas Detector by Josef Kristofoletti 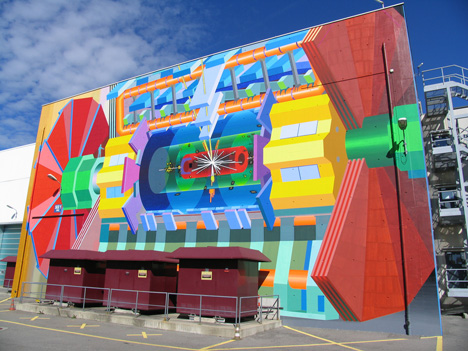 Painter and muralist Josef Kristofoletti is pleased to present his latest project, the "Atlas Detector," commissioned by none other than the ATLAS Experiment at CERN, which is headquartered within the otherwise nondescript building. While we eagerly anticipate confirmation of a certain recent discovery, the Austin TX-based artist has recently completed his eyecatching rendition of the very same.The three-story tall mural was painted by international artist Josef Kristofoletti on the side of the ATLAS control room directly above the detector, near the Swiss-French border outside of Geneva. This project was inspired by the same questions that the physicists at CERN are trying to answer; where did we come from, what does it mean to be human, and what is our place in the universe. The artist worked closely on location with physicists at CERN over the course of a year to create the mural. It depicts the artist's interpretation of what the Higgs boson might look like. 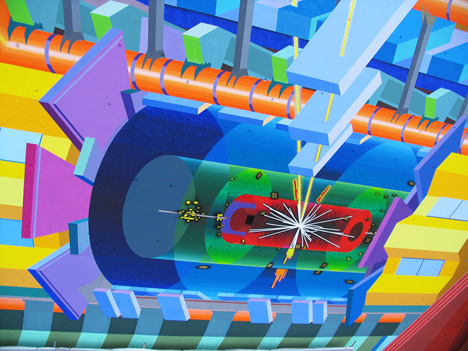 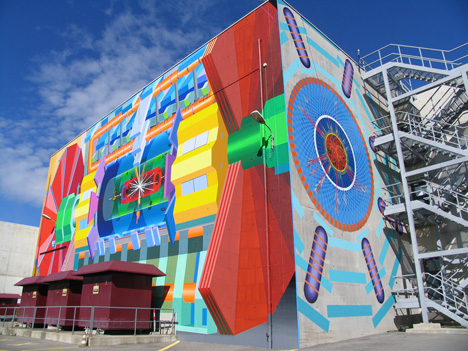 Time-lapse painting-of video after the jump:

As for the boson itself? Peter Higgs himself probably couldn't explain it much better than this excellent video, via 3qd, which might be worthy of its own post (save for the fact that I'd be kidding myself if I attempted to provide any sort of meaningful commentary).

A Very Large Painting of a Very Tiny Thing: The Atlas Detector by Josef Kristofoletti