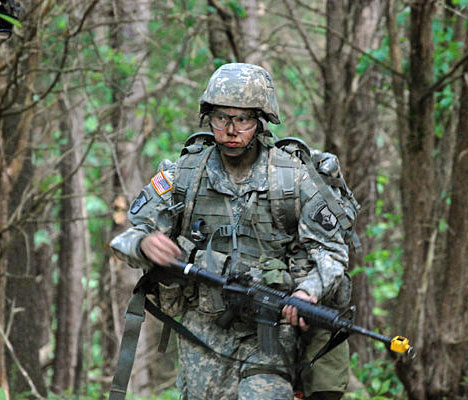 Women make up 14% of the U.S. military's active duty troops, and that number is projected to grow to 25% by 2025. And while women are officially barred from combat jobs, the fact of the matter is the closer they get to the front lines, the higher the chances they'll be engaged. To date more than 100 women in the U.S. Armed Forces have been killed in Iraq.

One problem female soldiers face is that body armor designed for men does not fit them well. In addition to having breasts, women's bodies have different curvatures that male body armor does not account for, which makes the armor both uncomfortable and dangerous. "It hits them improperly in the back and too high in the neck," Massachusetts Congresswoman Niki Tsongas told the Christian Science Monitor. "It also makes it hard for them to maneuver."

"It rubbed on the hips, and the vests were too long in the front," Lt. Col. Frank Lozano explained to the same paper, "so that when you had female soldiers climbing stairs or climbing up a hill or a tree, or sitting for a long time in a vehicle, that would create pressure points that in some instances could impact blood flow and cause some discomfort." A study done by the U.S. Army found that the ill-fitting male armor interfered with women aiming their weapons and encumbered them from getting in and out of vehicles, all of which are obviously potentially deadly problems.

The military is currently experimenting with female-specific armor—and running into design and materials challenges they did not experience while designing men's armor:

The more curves the plates have, the heavier they get. It also creates potential weaknesses in the armor, like creasing a paper, Lozano explains.

"There are some complex curvatures that come into play with female hard-armor plates," he says. "I could make female hard armor, but it would be twice as heavy." As a result, some of the Army's developmental efforts involve "unique chemical designs" to create plates that are lighter and conform to different body shapes.

Female designers out there, I smell a potentially kick-ass thesis project.