An Olympic Medal Worthy of a Design Award (or Vice Versa)

If we had to choose one awards trophy to rule them all, we'd be hard pressed (no pun intended) to go with anything besides our own: after all, the beautifully-machined mold has a teach-a-man-to-fish concept that appeals to both our designerly and egalitarian sensibilities (and while we're on the topic, we'd like to congratulate those recently-announced winners who will soon be enjoying trophies of their very own). But all else equal, we're pretty impressed with the medals that UK's Neil Conley has designed for the recent New Designers Award.The 2012 awards package is a balance of two underlying themes; the notion of consistency and quality of message, and the celebration of design during London's Olympic year... Throughout the decades, Olympic design has often been a measure of the successes and universal pertinence of contemporary design. From Munich to Vancouver, a resolute stance on execution and clarity has set the precedent for considered, consistent, and beautiful design responses.

Designed as an alternative resolution to the London 2012 design concept, the New Designers Awards hopes to reinstate these themes during one of the world's premier graduate design events: A culmination of the best amateur talent across multiple disciplines, contributing to an event of great quality. 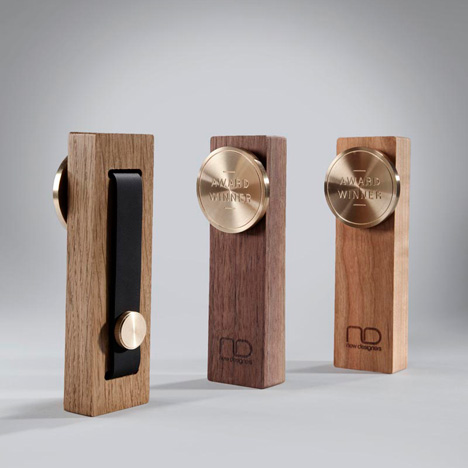 Manufactured from oak, cherry and walnut, the body of the trophy reflects the skills and materials associated with the disciplines of traditional furniture making and architecture. 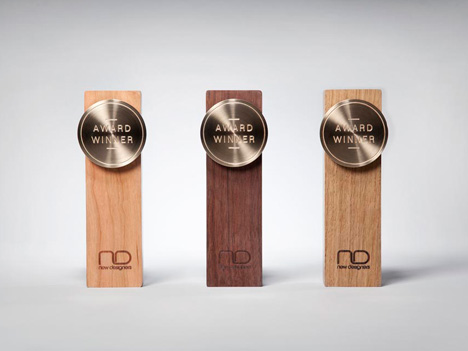 An understated palette of woods has been selected to differentiate between the awards given for 'New Designer of the Year, Runner-Up and the remaining awards, produced in walnut, cherry and oak respectively. 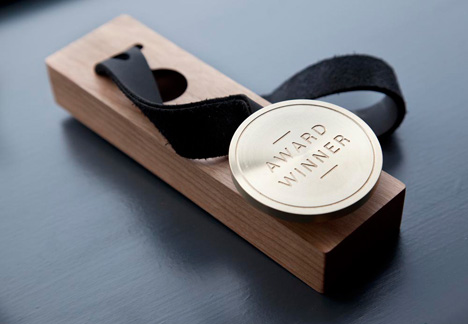 The main focus of the trophy, the brass medallion is the most literal reference to the Olympic theme.

The minimalist design is in keeping with the understated aesthetic of Conley's previous work, which emphasizes quality through material. A perennial favorite in the international design show circuit, Conley has won a New Designers award himself. While the object speaks for itself, the designer has provided plenty of documentation and a boatload of beautiful photos capturing the the entire awards package, intended as an "homage to Otl Aicher's visual communication of the Olympic Games in Munich 1972."The Munich design package aimed to create a multi-cultural and multi-lingual communication for the event, through a distinct framework of rules and principles: The printing of all communications was limited to a palette of colours selected from Munich's Bavarian landscape (with each coming to represent different services and sectors for the games) and the generation of pictograms was so successful that it soon became an industry standard. Aicher was also responsible for imposing a standardised grid structure for all printed media, which was strictly adhered to, with only subtle variations in format to differentiate between the sporting and cultural Olympiads. These principles were applied to everything produced for the games; from posters, certificates and tickets, to promotional pin badges, matchboxes and beer mats. 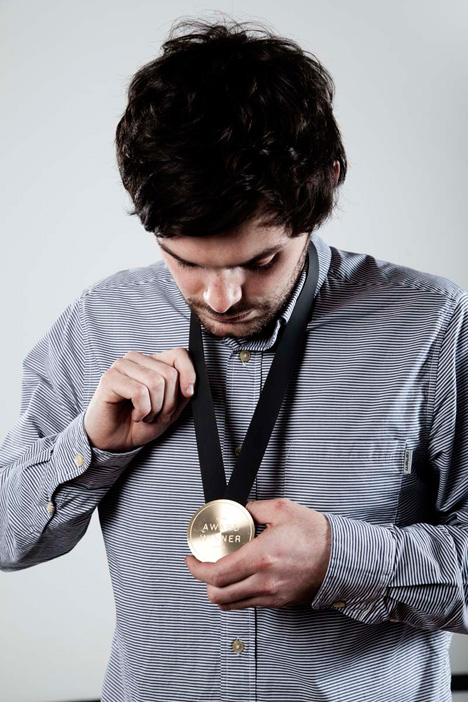 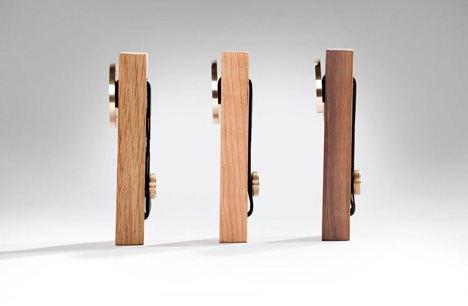 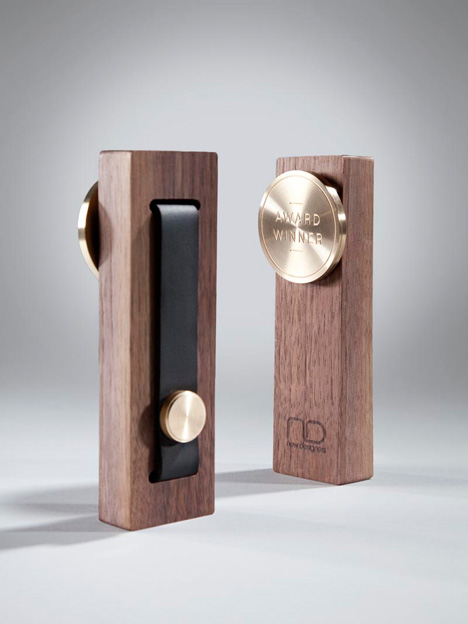 It's kind of a shame that Olympic medals will (probably) never have the thoughtful elegance of Conley's design.The form of the trophy was developed for both its simplicity and association. The face of the trophy references a modernist industrial design composition of two forms [rectangular and circular] with the brass medallion acting as the cornerstone of the Olympic theme. As the eye moves around the object, the visual weight of the medallion is balanced by the view of the knurled brass bolt—separated by the wooden body, and linked by the leather cable. The back of the award represents a traditional approach to materials and process; with the wood, leather and brass sharing a subtle sense of functionality—echoing the composition of the front, whilst supporting the notion of a traditionally skilled backbone to a piece of contemporary design. 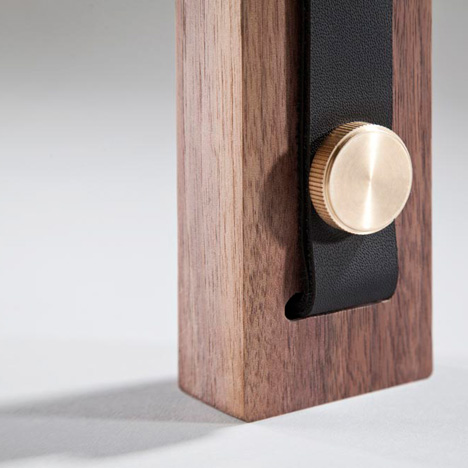 Designed and produced exclusively for the trophy, the knurled bolt acts as both a visual and physical counterbalance to the brass medallion, as well as securing it to the wooden body at the desired height. 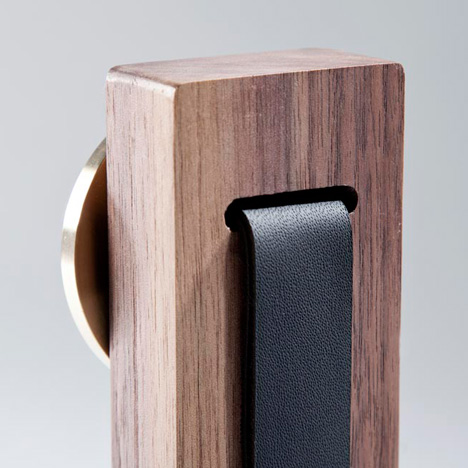 A representation of the disciplines of fashion and jewellery making, the neck strap for the medallion is cut and stamped from matte black leather and fastened with a brass eyelet. 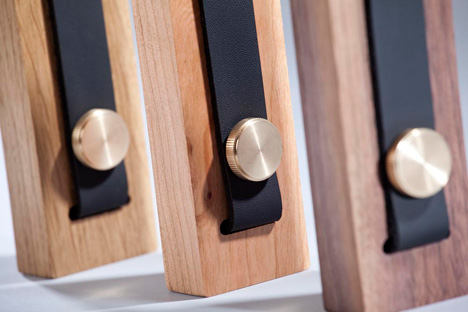 To manufacture the body, the timber section is first split lengthways; with each piece then being machined from this cut edge before re- joining. This leaves the impression of an impossibly hollow structure, with all grain directions left intact. 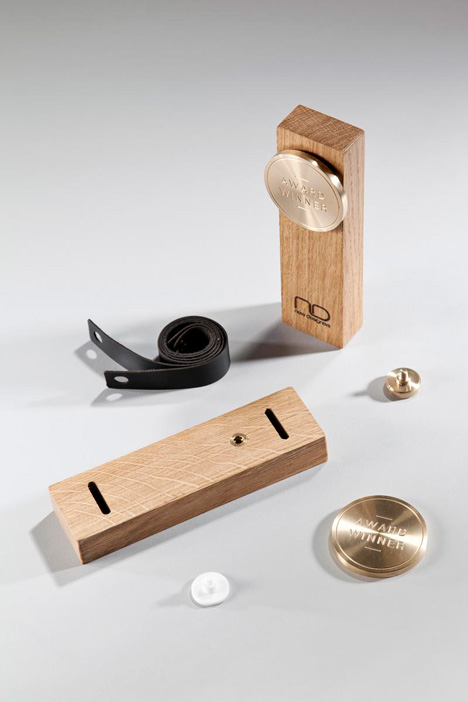 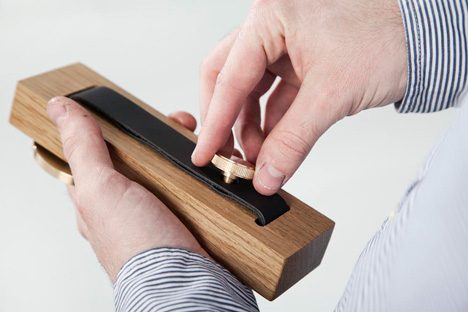 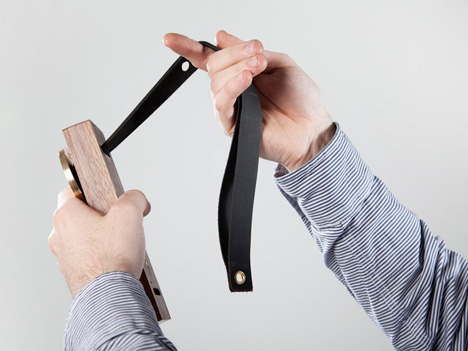 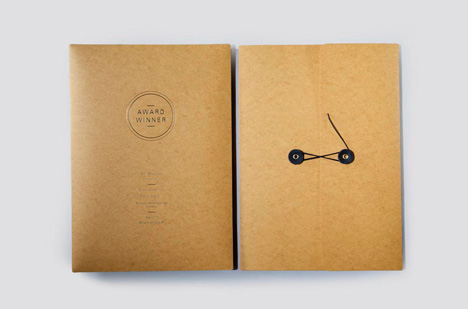 The supporting documentation is a nod to the two-dimensional design disciplines in the New Designers exhibition; it should come as no surprise that Conley is equally comfortable with graphic and industrial design. "With continuing emphasis on process, continuity and execution, no fewer than five processes are used in the production of each winners pack; these include foiling, stamping, embossing, wax sealing and laser-cutting." 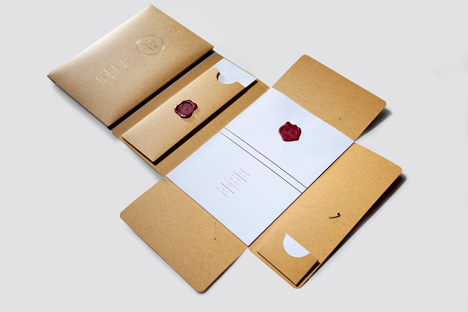 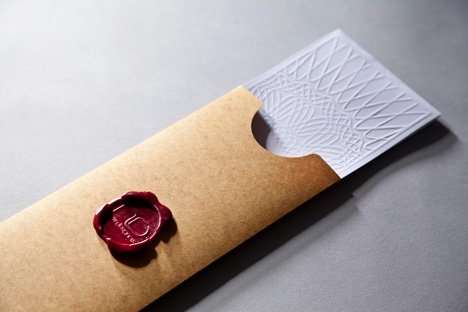 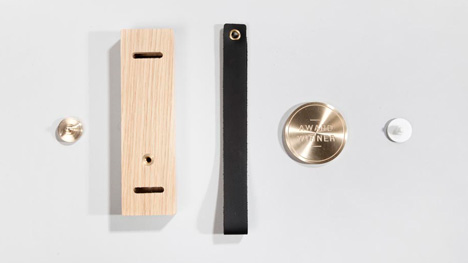 An Olympic Medal Worthy of a Design Award (or Vice Versa)