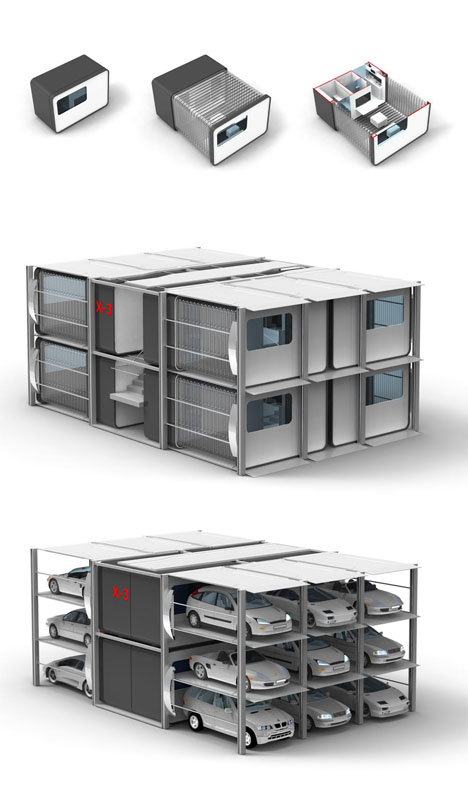 This is one of those concepts where I think the general idea is sound, but the particulars are not. Nevertheless, it's a good 1.0 of something I'd love to see the 2.0 and 3.0 versions of.

San-Francisco-based architect Aaron Cheng's entry in the James Dyson Award competition is called the Pneumatic Shelter. It utilizes inflatable structures to solve the urban issue of not having enough parking spaces.

Function The goal for this design aims to solve the space utilization problem by creating a new building type where housing and parking are integrated into one. During daytime, the housing units are compressed to create spaces for parking, while at night, the process reverses with parking turning back into living quarters via a pneumatic structure.

Inspiration Limited spaces with ever growing population in major metropolises like New York significantly lower people's standard of living. One of the main issues with these cities is the poor utilization of certain spaces. Parking garages, for example, are occupied during daytime while emptied at night time. Apartments, which are empty during daytime, suffer from the same usage efficiency problem.

Development The Pneumatic Shelter is the key in the development. This involves inflating an ETFE skin with air, inflated from the permanent utility module or hand pump. This unique structure system allows the project to transform from living space to parking space and vice versa.

See it in action:

My key criticism is that people's living spaces are not consistently empty, particularly in this age when technology is giving us ever-more flexible schedules and options for where we can work. I think in order for Cheng's concept to come together, it needs to target areas that are mandatorily vacated on a consistent and ironclad schedule: Municipal institutions, public schools, retail environments, et cetera.

Furthermore, I was going to say Cheng's concept could be applied to prisons, where cells could be made to give way to the mess hall or exercise yard—but I just realized no one wants to place hardened criminals in inflatable cells.

This is the part where I ask you for your suggestions for applications.