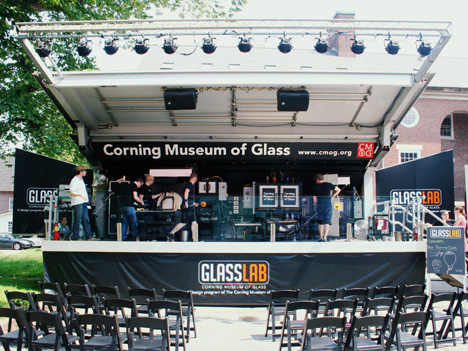 In order to bring their mobile GlassLab to Governors Island, the folks at the Corning Museum of Glass had to schlep the custom-built tractor trailer from the Finger Lakes region down to Jersey, completing the 200+ mile journey by barge. A recent visit to a live glassmaking demonstration on a typical (read: sweltering) summer morning affirms that the trek was well worth the effort: the Corning team offers an experience that is at once informative and spectacular—that they're masters of the craft is a given.The Corning Museum of Glass will bring its GlassLab design program to New York this summer with a month-long series of free public glassmaking performances on Governors Island. New York-based designers will bring their sketchbooks and concepts and work side-by-side with master glassmakers in a unique mobile hotshop developed by the Museum. The teams will prototype their design ideas in live glassblowing sessions, allowing audiences to watch the evolution of the designs as they are created. The design performances will feature contemporary graphic designers included in the onsite exhibition Graphic Design - Now in Production, presented by Cooper-Hewitt, National Design Museum 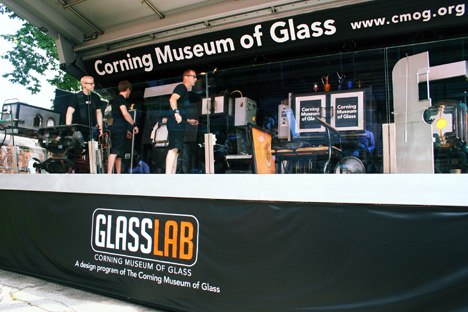 Ironically, the glass barrier was a 'glaring' issue for photography... 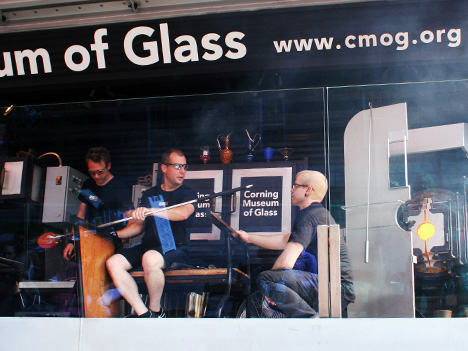 From L to R: gaffers Chris Rochelle and Eric Meek traveled from Corning; Adam Holtzinger is a Brooklyn-based glass artist 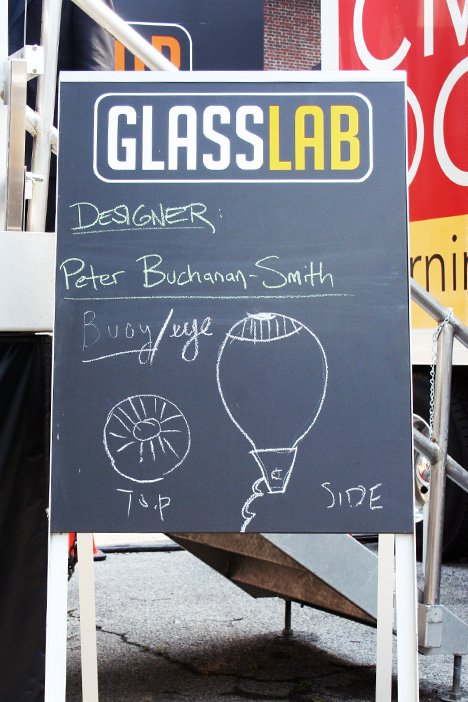 Designer Peter Buchanan-Smith is best known for the axes that feature prominently in the exhibition's marketing material; he came up with a glass 'buoy/eye' for the GlassLab team

Graphic design fans and Minnesotans alike might recall that Graphic Design: Now in Production debuted at the Walker Art Center last year; Cooper-Hewitt is pleased to bring it to one of NYC's increasingly popular summertime destinations while their uptown gallery is undergoing renovation. (Our friend Alice Twemlow of SVA's D-Crit program recently conducted a nice interview with the exhibition's curatorial team, in which they share their thoughts on the singular, if insular, venue, among other topics.) 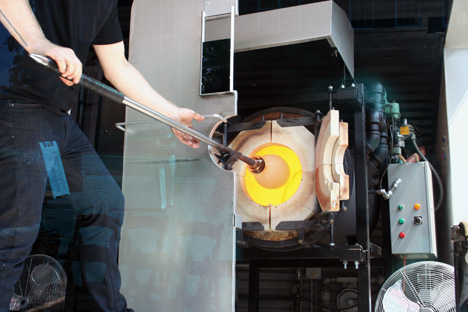 The furnace burns at temperatures of >2000°C 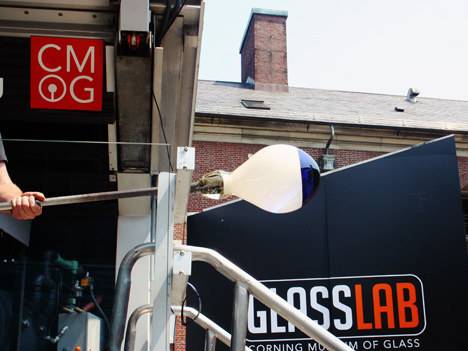 The GlassLab was conceived for the occasion of Design Miami/Art Basel in 2007 and it has traveled throughout Europe and America since then. Rob Cassetti, Creative Director of the Corning Museum of Glass, notes thatGlassLab provides designers with rare access to hot glassmaking processes, enabling them to experience firsthand the full potential of glass as a material for design—pushing the creative boundaries of both the designers and glassmakers. We've worked with designers from a variety of disciplines, including fashion, product and even toy design. The design sessions on Governors Island add an exciting new facet to GlassLab by engaging a group of leading graphic designers and allowing them to translate their visions into three dimensions. 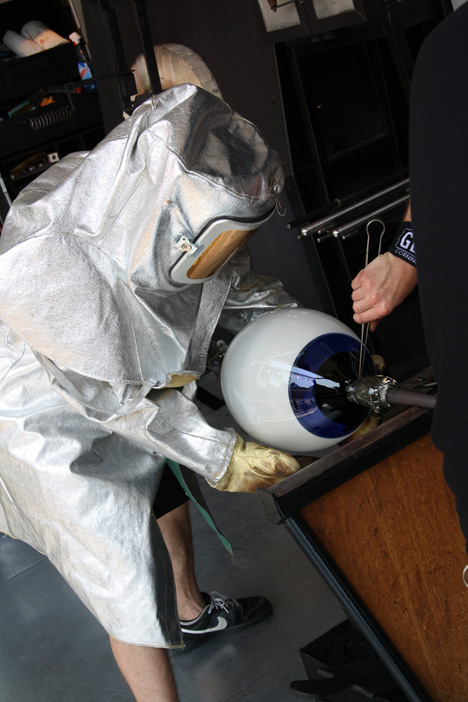 Still not convinced? Check out the sizzle reel:

Which is a long way of saying that the 172-acre island is well worth a daytrip; the opportunity to catch the craftsmen at GlassLab is all the more reason to visit on a weekend in the near future (we recommend the more manageable ferry from Brooklyn; cyclists had priority last year, but we can't promise the same this year). This summer is might just be the last chance to see Governors Island in its current, semi-wild state—indeed, we're eagerly awaiting the reinvention of the public space come Fall 2013. 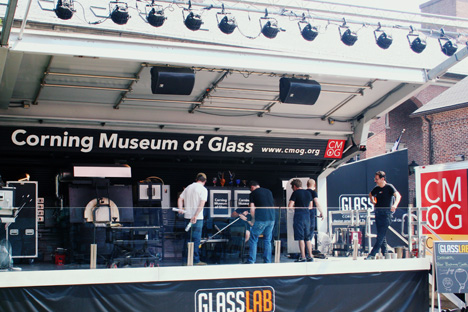 The designer (in white) watches patiently 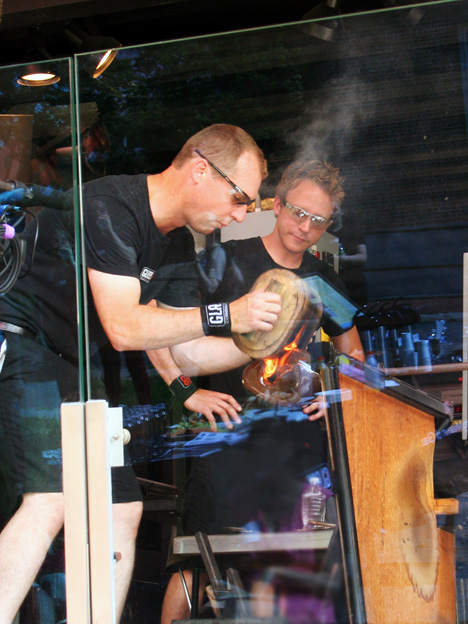 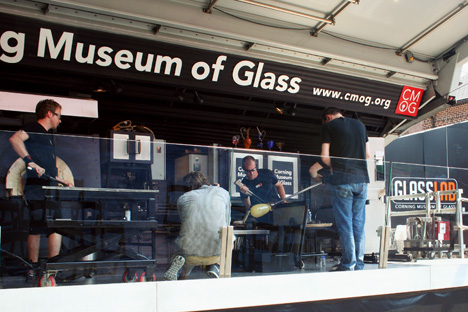 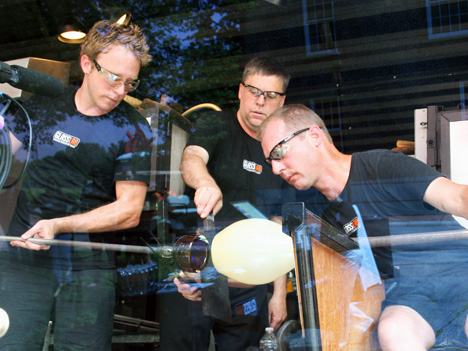 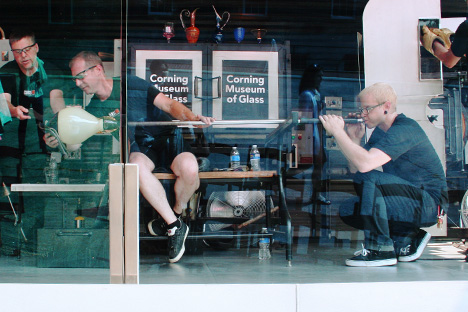 While special paddles, calipers and scoring tools are handy, wet newspaper is the implement of choice for much of the shaping process 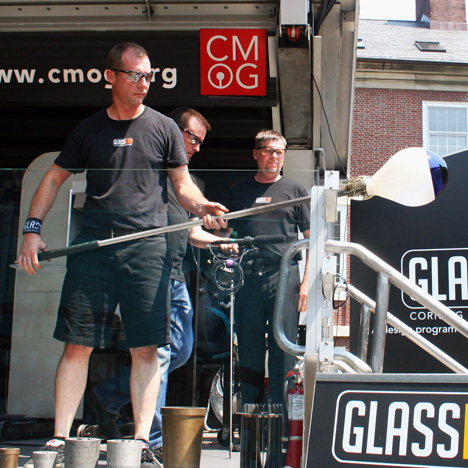 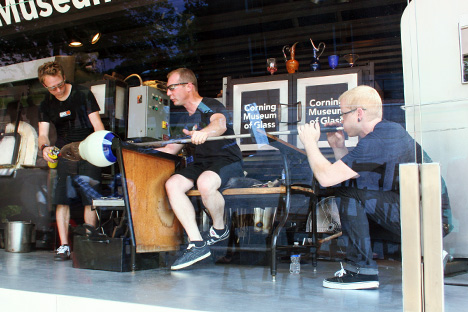 Teamwork is essential—you wouldn't know it by looking, but Adam (far right) had met his fellow gaffers just hours earlier. 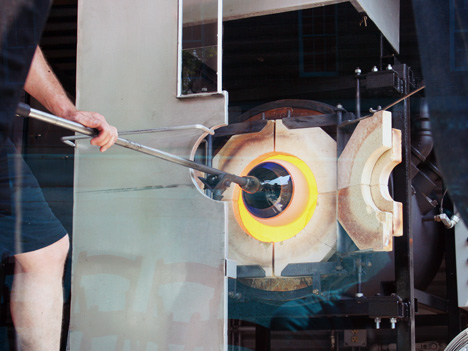 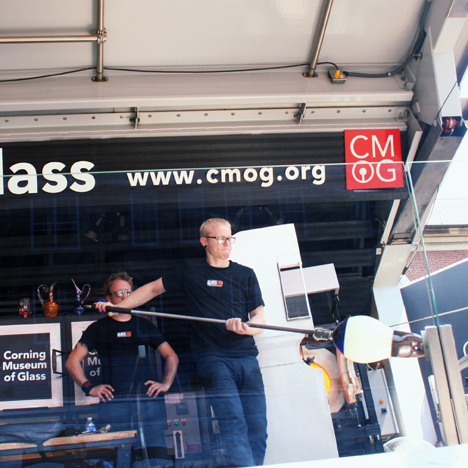 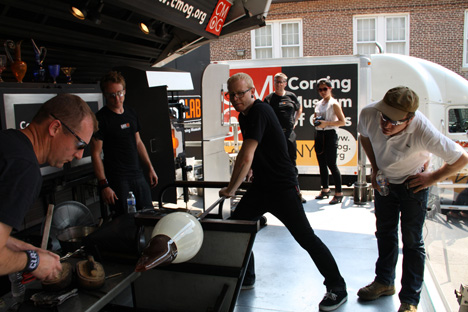