For One Company, Product Shape Trademark Protection Victory is Sweet

Here's an issue that's of great interest to product designers, yet bound to bore the crap out of the non-ID-affiliated. The U.S. Patent and Trademark Office recently granted trademark registration to a certain company on the design and shape of the product up above. It was described in the brief as "a configuration of [an object] that consists of 12 equally-sized recessed rectangular panels arranged in a four panel by three panel format with each panel having its own raised border within a large rectangle."

Can you guess what it is? Hit the jump to find out. 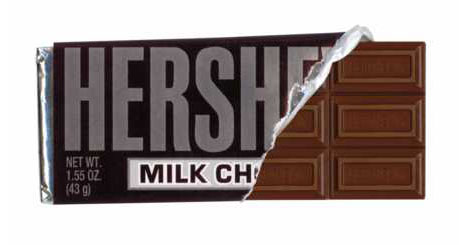 Yep, that's a Hershey's chocolate bar, and there were two issues at stake here. First off, we all know this chocolate bar has little channels where you're meant to break the bar into segments. These are functional, no? But trademark law dictates that you can't trademark functional elements of a design. In other words, a toilet paper manufacturer cannot trademark the perforations between sheets, nor a beer can manufacturer the pull-tab.

Hershey's must have awesome lawyers, because they successfully argued that "the particular combination of recessed rectangles with a raised border in the Hershey bar was not functional and, therefore, could be protected as a trademark." And the USPTO agreed.

The second issue is considerably thornier. According to Susan Neuberger Weller, a legal eagle at Washington D.C.'s Mintz Levin law firm and a writer for "Legal Intelligence" website JD Supra:

...The Board was required to consider was whether the product design had "acquired distinctiveness". Product designs and configurations are not considered "inherently distinctive" as are many other types of trademarks. Thus, in order to be fully protected as a trademark and registered on the Principal Register, Hershey was required to demonstrate that relevant consumers considered the product design to be a source identifier.

There is no specific rule or test for establishing that a mark has become distinctive. Evidence can consist of consumer recognition surveys, evidence as to the length of time a mark has been in use, sales revenue of goods bearing the mark, advertising expenditures to promote goods bearing the mark, and evidence that the product configuration was promoted in advertisements as a source indicator. Hershey's submitted all of these types of evidence to meet its burden of proof.

In addition, Hershey's also provided evidence that a third party attempted to copy the design of the candy bar to use as the shape of a brownie baking pan. The Board found that all the evidence demonstrated that the design above had acquired distinctiveness and could be registered.

What is perhaps most interesting is that the design of this particular Hershey's bar dates back to 1968, yet they did not seek trademark status until now. Perhaps they simply never needed to, and the recent case is a sign of the times.

For One Company, Product Shape Trademark Protection Victory is Sweet