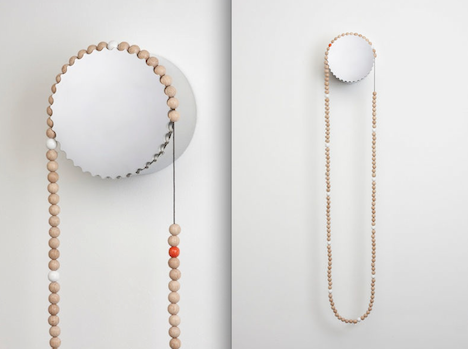 Icelandic product designer Thorunn Arnadottir must have made a pit stop in Africa on her way to London, where she received her MA in Design Products from the Royal College of Art last year. Africa's influence can be seen even in her most minimal and characteristically Icelandic pieces. The strongest of these is the Sasa Clock, which "aims to bring the benefits of ancient African concepts of time to our modern lives." In African Kiswahili culture, Sasa means What is now.

The Sasa Clock asks the user to relax and slow down, to become the master of your own time lest time become the master of you. The clock actually forces you to slow your pace as there is no quick way to read it. The long beaded cord revolves around a rotating mirror face, dropping beads along the cord at five minute intervals. Orange beads are for hours and gold and silver beads signify noon and midnight. To tell the time, find the gold or silver beads, count the orange hour bead and then the minute beads hanging on the cord. You can always stop time completely by lifting the cord off the clock "and wear it proudly as a statement that you are in control of your own minutes."

At the time Arnadottir released the Sasa Clock it was one of very few conceptual time-keeping products - not that the market for telling time in slow motion has exactly taken off, but in the last few months it's been eclipsed by Scott Thrift's magnificent annual clock, The Present. With a face that reads like a 360-degree rainbow, Scott's clock, like Arnadottir's, asks us to slow down, but unlike the Sasa Clock you couldn't tell time with The Present even if you were willing to count it out on beads - and that's the whole point.

In late 2011, Scott raised over $100,000 on Kickstarter for The Present. Since then he's been working with manufacturers to perfect the annual clock mechanism and the rainbow paint job, which, as you might guess, is extremely difficult to do. They should be ready any day now, and if you haven't ordered one yet get moving - or don't. Take your time and think it over. Meanwhile, watch this video that explains why Scott wants us all to be Present. 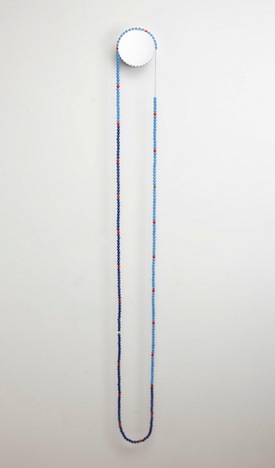 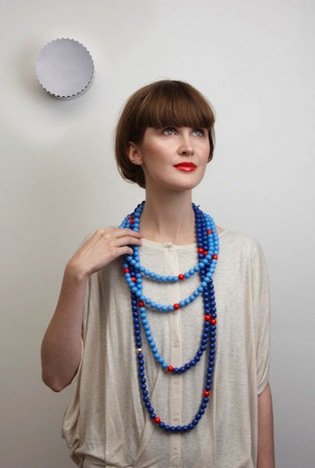 Sasa Clock is available from Spark Design Space for $430.