From Manifest to Market: Today's the Faraday Porteur's Launch on Kickstarter!

The e-bike beat has been quiet for much of 2012 (despite Tony Pereira's prediction)—sure, there was a BOXX talk and Audi's trick bike, but recent projects have either been more pragmatic or altogether speculative. 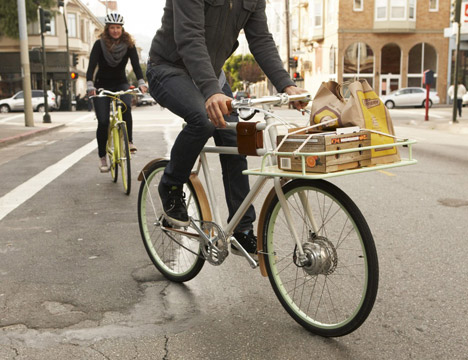 The Faraday Porteur electric bicycle has elements of all of the above—and then some—and is now available for pre-orders via none other than Kickstarter. From a practical perspective, the electric bike is expressly designed for stylish-yet-sensible city-dwellers, worthy of its designation as the "ultimate modern utility bicycle," its virtues duly noted by the Transportation Jury of the Core77 Design Awards, which named the Faraday Runner-Up in the category. 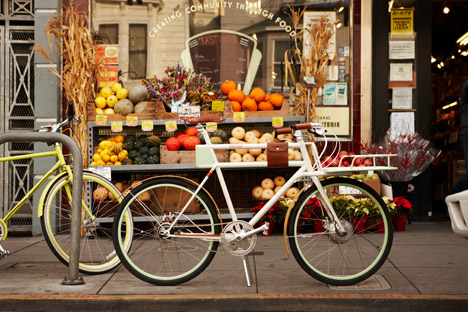 Yet the Faraday Porteur also hits that aspirational sweet spot: the thoughtfully-designed machine is no less than a dream bike, and it should come as no surprise that the Faraday Porteur won the People's Choice Award when it debuted at the Oregon Manifest last September (back when it went by its first name alone).The Faraday Porteur looks and feels like a high-end city bicycle, but it performs in a class of its own. The bike appeals to a broad range of consumers, from bike lovers to commuters, baby boomers, techies, gadget gurus, and anyone with hill phobia. Inspired by the classic European delivery bikes of the 1940s and 50s, the Faraday Porteur has been updated with state-of-the-art components and construction techniques. An integrated, all-weather computer manages the intelligent pedal assist system that senses the rider's output and powers the front wheel. A 'boost' switch provides an extra surge of power, but only when desired. High-powered, integrated front and rear LED lights turn on and off automatically, and the batteries are hidden seamlessly within the frame. At just under 40 pounds (without the removable rack), the Porteur is light enough to easily carry up stairs or load on the bus.

The Faraday, v1.0, on display at the PNCA during the Oregon Manifest

Indeed, astute readers may remember that we chronicled the entire design/build process of the Faraday, a collaboration between IDEO and Rock Lobster Cycles, from concept to execution. Highlights from the seven-month journey include the brainstorming session in April and the decision to move forward with the electric assist in July—just over a year ago.

The process and feedback have been so rewarding that lead designer Adam Vollmer recently left IDEO to found Faraday Bicycles. "Only a year ago we were documenting the creation of the bike on the Design/Build Chronicles for Core77. The reaction to the bike when we unveiled it at Oregon Manifest was tremendous, and it's incredible to be launching Faraday on Kickstarter just a short year later."

Paul Sadoff of Rock Lobster inspects the geometry as Adam looks on, September 2011Check out the Q&A with Vollmer after the jump... 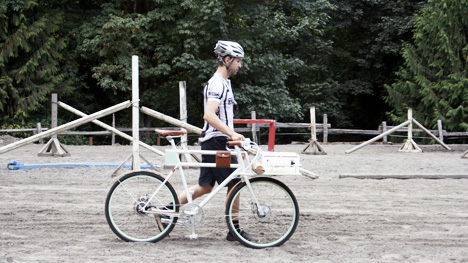 Core77: We were impressed by the Faraday when we first saw it at the Oregon Manifest last fall. What, if anything, have you changed or improved from the first iteration of the bike?

Adam Vollmer: The Oregon Manifest was an amazing validation of the enthusiasm that exists for a beautiful, elegant electric bicycle. We listened closely to both the praise and criticism we received from the Manifest when creating our production bicycle, the Faraday Porteur. On the outside, the Porteur looks almost exactly like the bike that won People's Choice at the Oregon Manifest, but on the inside, we've changed almost everything—and that's a good thing. We've made a full size run, souped-up the battery, improved the electronic hardware and software, and made sure every component on the bike is robust, waterproof, and serviceable. We also added the option for either a flat or riser handlebar and also a large or small cargo rack.

Beyond the Kickstarter rewards, you hint at an entire ecosystem of e-bike related accessories (with the removable front rack). Is this system based on existing standards, or are do you hope to establish standard measurements for new (even never-before-seen) accessories?

The Faraday's rack will have a standard design to suit accessories of different shapes and sizes. If there's interest, we're totally open to open-sourcing the rack design for people, designers or companies to create their own accessories. 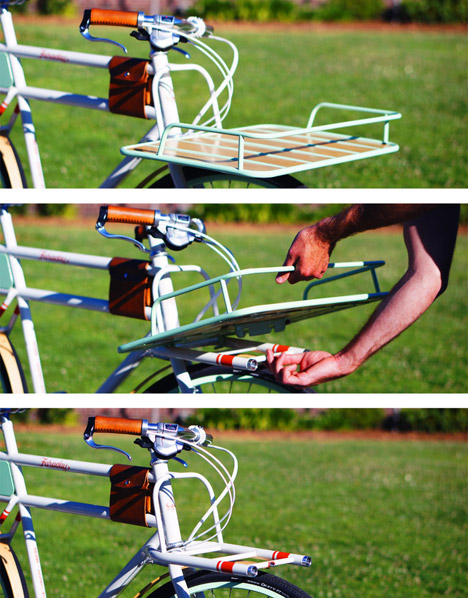 Conversely, to what degree can the components be serviced or even customized?

Servicing the Faraday is just like servicing a conventional bicycle. In fact, with the super-robust Shimano Alfine hub, your bike shouldn't require much servicing at all! In the event that your Faraday's electronics need to be serviced, contact Faraday's service department and we'll connect you with a local bike shop who can quickly replace any damaged components and get you back on the road.

Regarding customization for both the Production Version and the Collector's Edition: - Handlebar: Choose between a Velo Orange Belleville (flat) or Left Bank (riser) handlebar - Cargo Rack: Choose a large or small removable rack to personalize your Faraday

The Faraday Porteur is now available on Kickstarter with complete bikes starting at $3,500 (though of course there are rewards for anyone with a few dollars to spare). 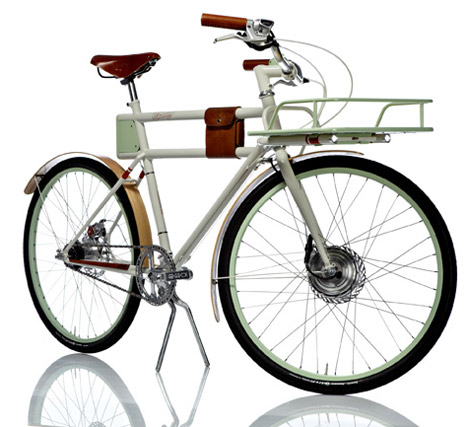