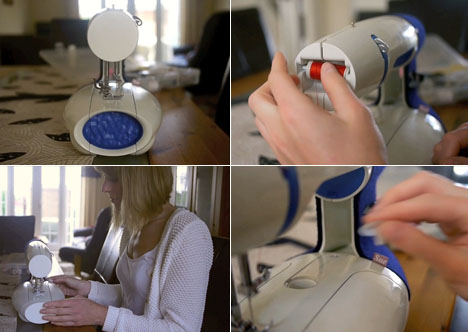 I've recently learned that there was another student exhibiting at the New Designers show who also did a sewing machine concept (see here for Tuesday's post on the first), but unfortunately, has not received any press on it, despite what I think is a fantastic effort. UK-based James Wood, who graduates from Bournemouth University's ID department this month, clearly familiarized himself with the product and did his homework before setting out on his re-design.

Before we get into his concept, I'd like to show you a couple of sewing-machine-related issues that a layperson would not have any reason to be familiar with. 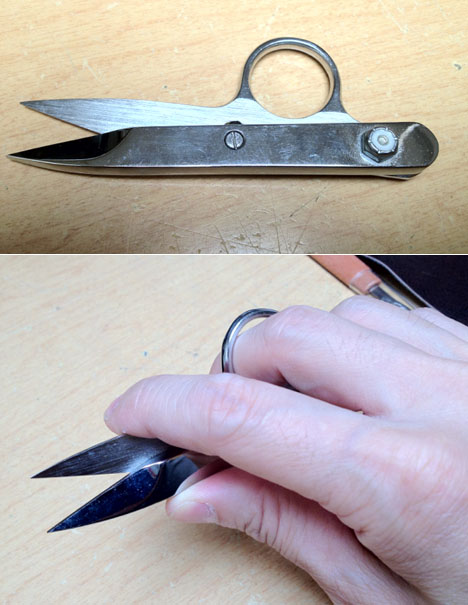 Those are thread snips, a diminutive and deceptively ineffective-looking pair of scissors. Sewists use these to cut the tails off of threads, enabling them to remove a freshly-sewn piece of material from the machine. You might ask why they just don't use regular scissors, as they undoubtedly have a pair on hand to cut the fabric; the answer is because the little snips are faster and easier to manipulate, particularly near the machine, than the typically large shears used to cut fabric.

But because there's no dedicated place to put the snips during sewing, people just lay them on the table, where they occasionally get in the way during sewing. Or you place them far off to the side and have to hunt around for them a bit. If you watch YouTube videos on sewing demonstrations, you'll occasionally see even experienced sewists hunting around for them.

Here's a machine I'm in the midst of restoring. Although initially covered in the grime of ages, it was extraordinarily, atypically well-preserved. Note the area of the arm, around the "S" of the Singer logo, is quite smooth. 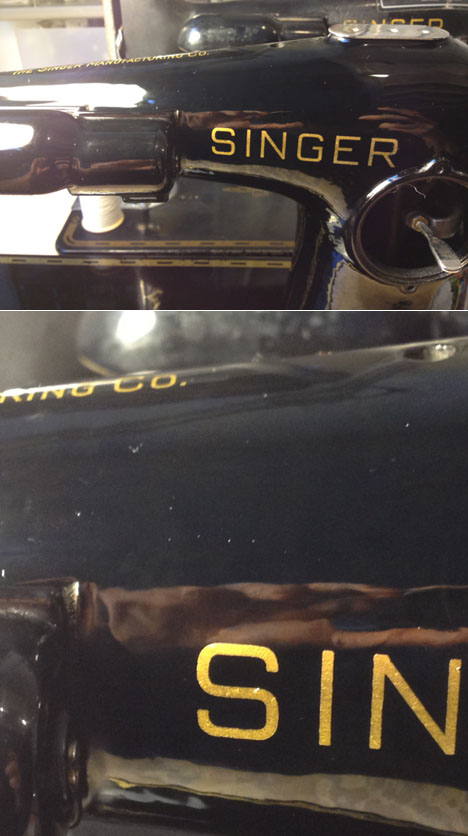 Now look at the same area on a more typical example of a well-used machine from the same era (1940s): 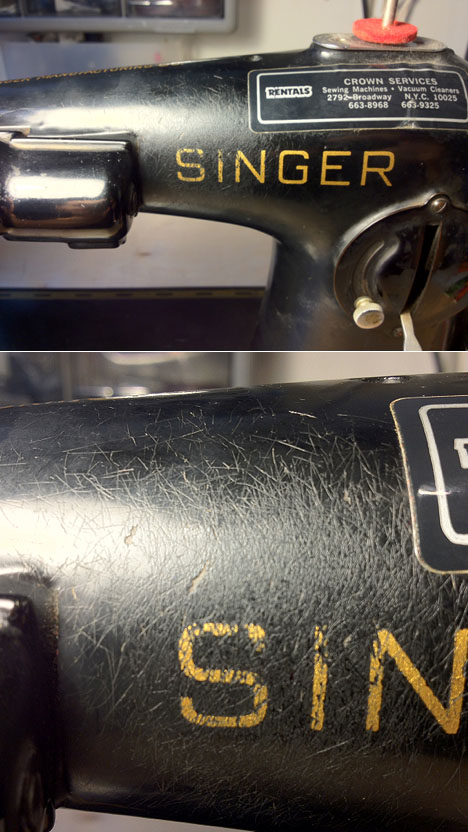 Those little scratches are what's called "pin rash." When sewing off a pattern, sewists will use pins to attach the paper pattern directly to the fabric (the same way you might spray-mount a CAD printout to a sheet of foamcore you needed to cut up). As they commenced sewing, they'd pluck each pin out as it approached the needle. Pin cushions existed at the time, but in an early example of product hacking, sewists discovered it was faster to simply tie a length of fabric around the arm of the machine, like a headband, and stick the pins into it one by one. The ugly scratches you see here are the result.

I love the simple idea of the felt-lined, magnetic on-board snips holder. It would enable you to always have the snips at easy reach, while the felt prevents you banging up the finish of the machine.

I also love how the felt is simply extended upwards to form an on-board pin cushion. Simple, attractive, and solves a problem.

A third thing I'm digging is the handcrank. You might wonder why anyone would prefer to do something manually when they have the option of using an electric motor. But I was surprised to learn, by participating in online sewing forums, of the popularity of handcrank machines. For people who live in remote regions or tempestuous areas like America's Gulf Coast, blackouts are a shockingly regular fact of life. There's also a class of retiree sewing enthusiasts who like to sew while seeing the country by RV or vacationing in electricity-free cabins or campgrounds.

Another surprising thing I've learned is that many parents and grandparents like to teach children as young as six to sew on a machine, but prefer handcranks because it is both safer and gives the child a sense of agency, which I applaud. Yet this market has been largely unaddressed, and forums are populated with people seeking handcranks for teaching purposes. With no commonly-available modern-day alternative, they must turn to the secondhand market and use machines that are literarlly 50 to 120 years old, which often require maintenance.

While I'm not keen on not being able to see the thread, concealed as it is in the nose of the machine, I really appreciate that Wood tackled the aforementioned areas with his concept. And at the same time, he was refreshingly up-front about the shortcomings of his project: "My University didn't give us workshop time so I had to make the model in a week, from home," he writes. "There are other features meant to be on the model that I just didn't have time to get on," he explained, referring to the bobbin-winding mechanism (mounted in the nose) and the presser foot lever.

I don't care that he didn't have time to completely finish the project; it is his design thinking that I value and respect. Wood, I hope you continue to seek the "Cure" for product design ailments.