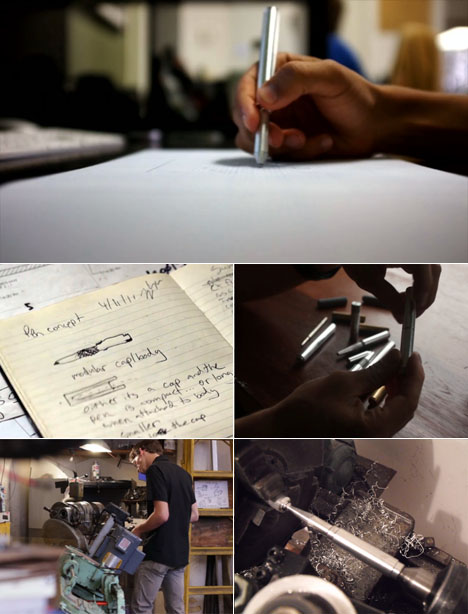 Think about it: How many "forever objects" do you really own? The computer I'm typing this on, that'll be gone in a few years. My cell phone and camera will shortly be obsolete. The object I've owned longest is a metal Zippo lighter, but as I'm trying to quit smoking I hope to soon throw it into the recycling bin triumphantly. My hand tools and all-metal sewing machines will outlive me, but those are about it.

Bicycle racer and recent Mechanical & Manufacturing Engineering grad Ian Schon wanted to create an object that he could use and carry for the rest of his life. Presumably a frequent sketcher, he struck upon the idea of creating a pen, and engaged in the sort of "pure" design process those of us working for organizations can only dream about: The pen's form would be determined solely by Schon, and designed to fit his needs and tastes exactly (though he would later observe how others used it to willfully tweak the design). There were no focus groups, no selling to upper management, no meetings and no reviews. And it had to be manufacturable by the metal lathe he had sitting in his apartment, making the contracting process rather simple.

While carrying a prototype around in his pocket, Schon noticed the aluminum body was being weathered by his keys. And in his eyes the resultant patina was a good thing: "I feel that the wearing of objects should be something that makes them valued," he explains, "rather than in need of replacement." Hear hear.

After designing the perfect pen for himself, Schon decided to dip his toe into the mass manufacturing world and commissioned 1,000 of them from a local manufactory. They were quickly green-lit on Kickstarter, and with roughly a month to go you still have plenty of time to get yourself one for $30.

For the production run, Schon conceded a design point to the mass market: Users found the knurled grip to be too abrasive, so he replaced it with a series of three fine grooves, which feel smoother while still providing some purchase. But in his pocket he still carries the real deal, the original with the knurled grip he likes, the one that he made himself and will carry forever.