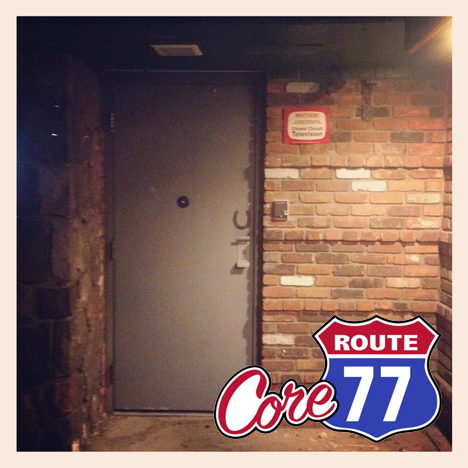 We can't believe that Dave has been on the road for a month straight and he's saved the best for last. After wrapping up things in Chicago, Omaha and Madison, he's humming in the Motor City. Keep up-to-date with all of the adventures on Route 77 by following @DaveSeliger on Twitter!

Of all the cities I visited on my trip, I was most excited to see Detroit. However, it would be too easy for this article to reinforce the status quo when it comes to talking about Detroit. Sure, I could write about Michigan Central Station which has come to serve as the de facto symbol of Detroit's landscape of abandoned buildings. (It really is a sight to behold, especially when you come across it in the dead of night like I did.) I could write about the plan to shut down streetlights or that whole Robocop / Kickstarter thing. Instead, I'm going to introduce you to some of the absolutely amazing people I met in Motor City, because the new definition of Detroit is based on the people not the city. 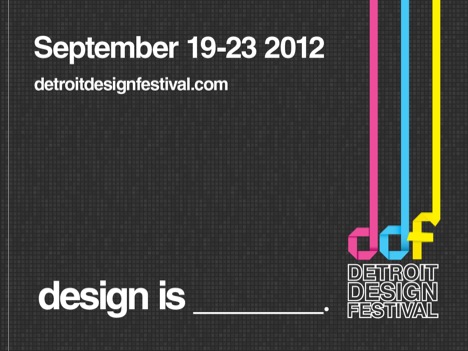 I stopped by the Detroit Creative Corridor Center (DC3), housed in the College for Creative Studies, to understand the current context for design and designers in Detroit. The goal of DC3 is to spur economic development by "presenting assets that are uniquely Detroit," to advance Detroit creatives, and to leverage design to help solve the "deep challenges" of the city. In reality, this means the Center acts as one part business incubator, one part ambassador, and one part party planner. DC3 also happens to know everyone and everything involved in design in Detroit. 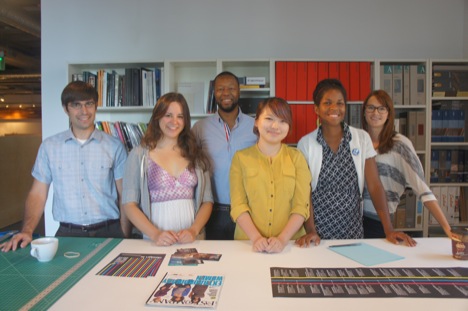 Back in 2006, Business Leaders for Michigan gathered to map the assets for Detroit and surrounding areas as a way of galvanizing the region. Creative talent was high on the list, but retaining and attracting that talent was a problem. Then 2008 hit. Although the atmosphere in the city "eventually stabilized," there are still physical and psychological barriers to developing the creative community in Detroit into a healthy and flourishing one. In order to take the first step in overcoming these challenges, Matt Clayson, Director of DC3, is asking the question, "What are the big deficiencies that prevent creative talent in Detroit from telling their stories?" 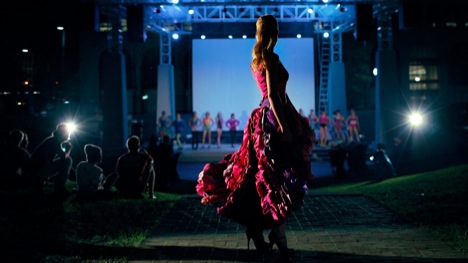 Perhaps the largest barrier is not actually in Detroit, but rather is how the media portrays Motor City as a post-apocalyptic wasteland that is a little too Escape From New York instead of Urbanized. Clayson recalled a story of how a group of politicians visiting from Algeria were scared stiff by their handlers by the time they arrived in Detroit. News stories on Detroit tend to originate from "someone who's never visited the city" or, if they have, perhaps the fact that the city is an "insider city" makes it difficult to penetrate the hard outer skin. For those who do live in the city, however, "two to three degrees of separation" creates more of a "shared experience," if not a survivor's culture. 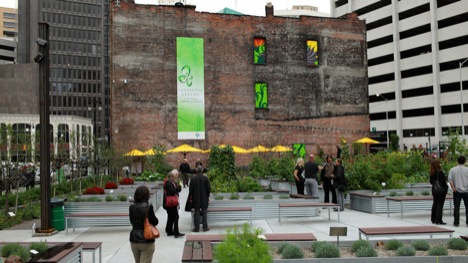 And that's where programs like this September's Detroit Design Festival come in. "The Festival tells Detroit's story from Detroit's perspective," said Programs Manager Adrian Pittman. Designers, artists, technologists and the like can not only show off their work at the Festival but can also bring visitors into their studios and into a Detroit not yet fully visible to outsiders. Finding a balance between making Detroit "more consumable for outsiders," while maintaining that atmosphere of Where Everybody Knows Your Name, is tough, though. On the one hand, designers and artists can do their work purely informed by the city of Detroit with little "pressure from mainstream trends." On the other hand, DC3 knows that bringing "larger industry players" into the mix is crucial for transforming the city. "We don't want quick wins," said Associate Director Bethany Betzler. "We want things that will show results in the long run." 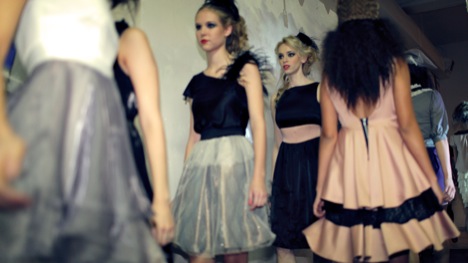 True to form, DC3 introduced me to Peggy Brennan, co-founder of the Green Garage. The converted Model T showroom serves as a demonstration of down-to-earth sustainability (no pun intended), as well as a business incubator (everyone incubates these days) and an advisor on integrating sustainable practices for any interested member of the community. Brennan and her husband, along with 200 volunteers, spent two years designing how to best renovate the showroom and looked to the Passivhaus for inspiration. With 19-inches of insulation and triple-glazed windows, the Green Garage only costs $300 to heat for a year. 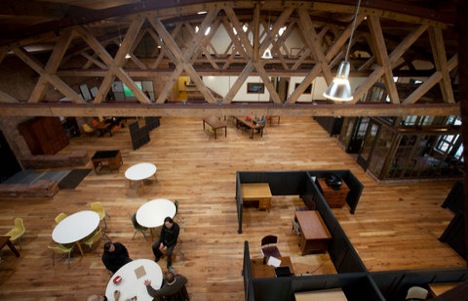 But that's not even the best part. During the renovation, only one-and-a-half dumpsters' worth of building material was taken off the lot—all the rest was reused and repurposed. Heating pipes became the main staircase railing; scrap wood became a wall; and window frames became the indoor greenhouse. Moreover, 75% of the materials that came onto the lot were recycled. The trade-off of the reuse process is "more time, less money" and apparently renovating the building with recycled materials cost the same as tearing the building down. "If you want to do design right, sometimes it just takes time," said Brennan. When I asked if this same process could be applied to other projects big and small, Brennan responded with a resounding "Yes." 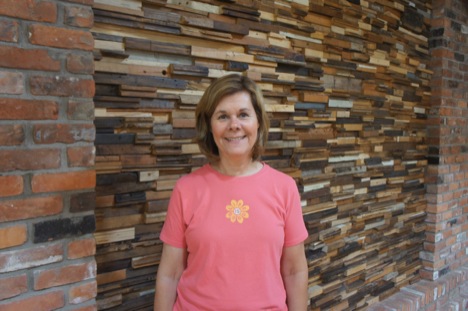 Of all the fantastic people I met in Detroit, one of the most inspiring was Veronika Scott of the Empowerment Plan. At age 23, having just graduated from the College for Creative Studies, Scott is the face of young designers and entrepreneurs reshaping Detroit. Hearing Scott tell the story of her recent success in battling homelessness is nothing short of empowering. 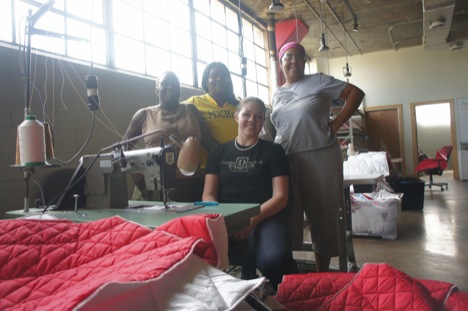 Veronika Scott and some of her employees

Scott's journey started her junior year during a design studio with the prompt "Design to fill a need." "Most of my needs are being met," though Scott, who at the time was a "broke student living with grandparents." Homelessness, though, is of epidemic proportions in Detroit and Scott's family "was never too far from this type of reality." To find her clients for the project, Scott had to literally go to "Hell," the "most violent and dangerous" homeless shelter in the city where those in need can get a chair to sit in and sleep on for just eight hours at a time. "The first time I went there, they were not warm to me," said Scott. Apparently the shelter had been approached in the past about "doing a homeless parade," among other ludicrous projects. 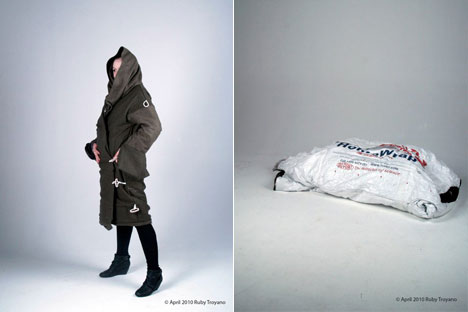 One of the jacket prototypes

"I walked in holding fabric and other crap to start a conversation for design research," said Scott. "It was everything I had read to do in a book." When faced with thirty large men cursing at her, Scott threw the book's strategy out the window and turned to her grandfather's advice: Make promises you can deliver on. Scott returned to the shelter at the same time, three days a week for three months to listen to and talk with the homeless. "I was there when I said I'd be there," said Scott. "It's important to be consistent."

The general public has trouble understanding why a homeless person would choose to "make their home twenty feet away from where someone is offering it for free." What that sentiment fails to capture is the psychological side of being homeless. "Everyone wants to feel like they have a purpose and that homelessness is a temporary condition," said Scott. We may seem homeless shelters as charity without any emotional or psychological repercussions, but many without a home see accepting shelter as "demeaning." Non-profits can provide shelter and food, but what they cannot provide is pride in and respect for oneself. "The coat came out of the idea of offering independence," said Scott. 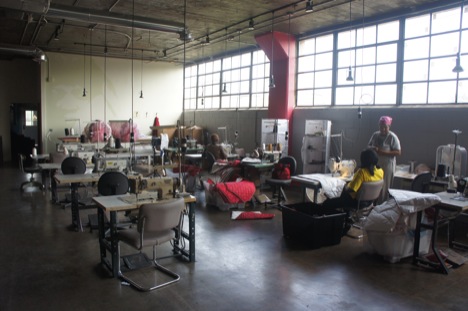 Instead of trying to cure homelessness, Scott sought to improve the lives of the homeless in their current situation by designing a heavy-duty winter coat that doubled as a sleeping bag. The first iteration "Frankenstein coat" was "pieced together from the dead bodies of other coats." It may not have been pretty, but it was a proof of concept and gave Scott the opportunity to have real design conversations with her clients. An encouraging final critique by Emily Pilloton helped Scott create four more prototypes.

However, the itching question in the back of Scott's mind was, "What are coats going to do that jobs won't do?" Fast forward two years and Scott has raised enough money to hire three formerly homeless women full time, with four more women currently in training. Last year, the team produced two hundred more jackets. "I heard over and over again that I was going to fail because I was hiring homeless people," said Scott. "People think they're too lazy, not intelligent enough, not driven. We definitely proved that wrong!" 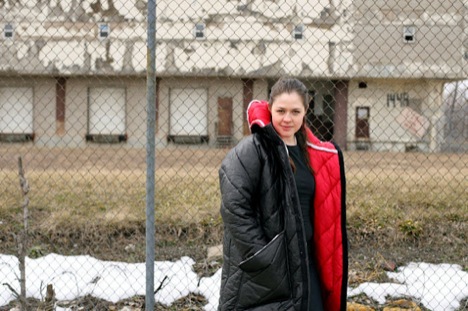