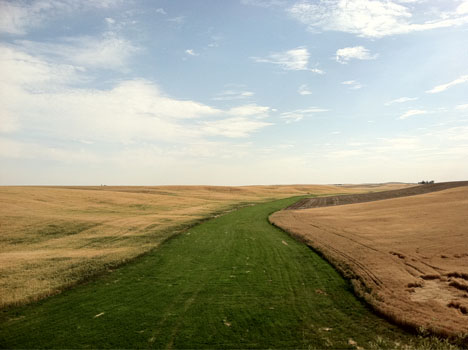 From the open road...

From the open road... 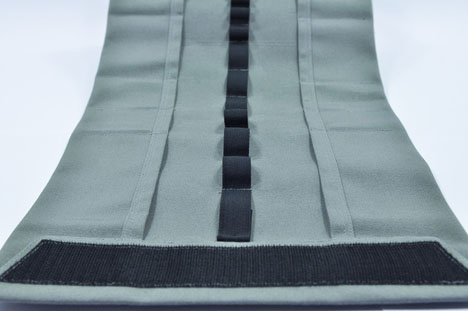 I love hearing about the various paths people take to become product designers, particularly the more unusual ones.

Last year Mike Bratcher rolled out of L.A. on his motorcycle, a Honda dual-sport XR650L loaded up with traveling gear. In his rearview mirror was the job he'd recently quit at the Parts division of a major auto manufacturer. During his five-year stint he'd risen to Sales Manager and learned a lot about business, before ultimately deciding the demands of a career in sales were not for him.

But Mike wasn't fleeing L.A.; he was taking time off to see America. Nearly four months later, he rolled back into town with 17,048 more miles on his bike and the URL for a Tumblr page where he'd photo documented the trip. "The United States is much bigger and beautiful than I could have ever imagined," he concluded. "Three-and-a-half months is not nearly enough time to soak up this country, but it was a good overview at the least." Perhaps most amazingly, he'd not spent a single night of the trip in a hotel or motel, but instead carried everything he'd need for life on the road.

You can see a detailed breakdown of the insane amount of things he had to carry here, but there is one item in particular that's most relevant to this entry: 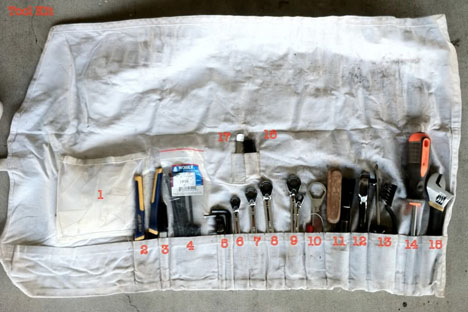 That's a simple tool roll Mike made for himself. "There's a lot of tool rolls out there, for like 10 or 15 bucks, but none of them were exactly right for me," he explains. "They were all way too generalized, so I just made my own." Bratcher had been making things for himself since growing up on a farm in Indiana. By junior high his classmates were surreptitiously making bong parts in shop class; Mike, more interested in chess than weed, made himself a chess board and the 32 playing pieces to populate it. "It wasn't easy," he laughs, remembering. "Sixteen pawns, four knights, four rooks...." 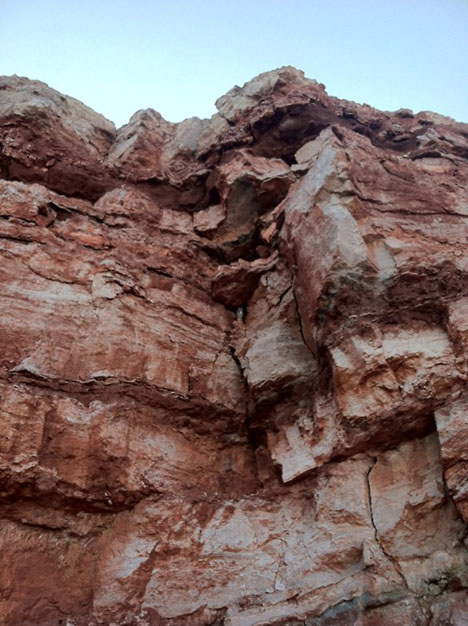 Back in L.A., while trying to figure out what to do next, Mike kept up with his newer-than-chess hobby of rock climbing. But though he'd meet people on the trail, he had a hard time convincing his L.A. buddies to come out climbing with him. "You know, the city thing," he says. "People like to stay put, sometimes it's hard to get them out of their routines." He picked up a few GoPro cameras ("Just one camera angle is not that interesting," hence multiple cameras) to capture just what he was doing out there. His hope was that his pals would be enticed to join him after seeing the videos.

Once he'd amassed the GoPro gear, he ran into the same problem he did with the motorcycle tools: No one made a good way to carry the stuff, at least not the way he'd like to carry it. The typical protective cases you'd find in a camera store were too big, too bulky, too expensive, and not designed for GoPros. "Conventional camera bags have voids of space for large equipment and are designed to protect delicate units," he explains. "Since GoPro has defied both size and fragility, a new means of organizing and carrying is also in order."

Bratcher laid out all of the equipment you'd need for a three-camera GoPro set-up. 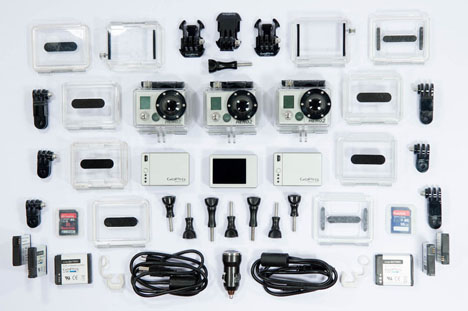 Realizing the roll-up form factor was ideal, he then designed and made this:

It suited his needs perfectly, took up little space in his backpack, and organized all of the various components for easy location. He began carrying it around and using it, and when other GoPro users spotted it, they wanted one too. Dude where did you buy that? You made it? Can you make me one too?

Inspired by a buddy who'd done a Kickstarter project (the Sonastand, which Ray picked up on last March), Bratcher decided to give it a go.

Click here for the RollPro Kickstarter page. The video pitch is below.

Firmly bitten by the problem-solving-through-product-design bug, Bratcher has now realized what he wants to do with his life. He recently started Riseful, a label under which he plans to design future problem-solving products. "I look around," he says, "and see tons of things that don't quite work. They sorta get the job done, but there's lots of little things that need improvement." And though he has no formal industrial design education, the Riseful motto he's come up with is classic ID:

Riseful is an outlet for dreams to materialize. It was started to create things with four values in mind.

When something is created with these standards at heart, it becomes a simply useful tool to compliment our individual journeys.

At press time, there was 20 days left in Bratcher's RollPro III pledging period, and he was 81% of the way there. Tomorrow, Saturday the 21st, is Bratcher's 26th birthday. His present may come a day or two late, but with any luck--and a little help from you guys--hopefully he'll get there.