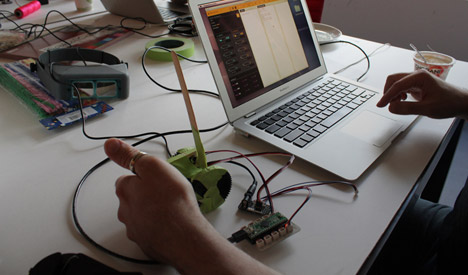 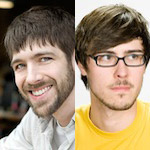 Whether it was when you tore your parents vacuum apart or took apart your iPhone, building and making things was at the heart of it. Teagueduino taps into this ideology which makes it so universal and a great jumping off point.

Teagueduino is an open source electronic board and interface that allows you to realize creative ideas without soldering or knowing how to code, while teaching you the ropes of programming and embedded development (like Arduino). Teagueduino is designed to help you discover your inner techno-geek and embrace the awesomeness of making things in realtime—even if you've only ever programmed your VCR.

Check out the details and support the project on Kickstarter to get your very own kit. More info on the Teagueduino website.

We tuned into the live broadcast to find out we were awarded the Professional Interaction Winner.

Since it's original launch, the Teagueduino site has seen hundreds of users sign-up and browse/contribute to the library of projects. We've added a handful of features to make the site and software more interactive (such as voting, the ability to host contests, and featuring new/exciting projects). We've also looked for partners to help with production of circuit boards and software development and have made all software and hardware specifications open source to facilitate it's evolution. Currently there are a handful of people in the community producing their own boards, including someone looking to do a second generation Teagueduino as a successor to the original.

Filling 300+ kits with Teagueduino boards, sensors, outputs, etc. seemed like a fairly simple task at first, but as soon as we started stacking up empty boxes to begin fulfillment we immediately became overwhelmed. Just doing the math based on the time-per-box led to enormous numbers that we knew would push us far beyond the timeline we were hoping for. But what we didn't expect was a studio full of TEAGUE designers to jump in and spend their spare moments in the afternoons and evenings working to make it all happen. It was awesome to see so many people want to help (without pay) because they believed in the cause: we all wanted to get Teagueduino out in the world to let others make awesome things.

Early on, we became excited about ways to simplify Arduino and make it more accessible. But with every decision came a trade-off; less memory meant smaller programs, realtime updates meant slower execution, plug-and-play connectors meant specialized hardware. We kept looking for workarounds and substitutes (which was itself a good exercise), but eventually realized that those difficult decisions were actually the most important contributions. Where there is no simple fix (yet) is exactly where you're helping to move the conversation and enable new possibilities.