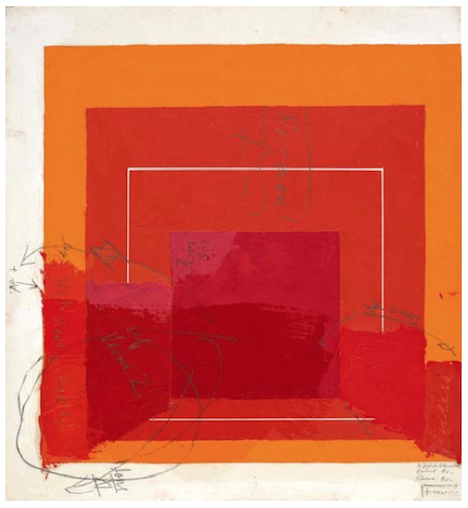 In its latest exhibition, "Josef Albers in America: Painting on Paper," The Morgan Library & Museum contests that Albers (1888-1976) is best known for a brightly colored series of late career paintings called "Homage to the Square," tossing in his vastly better known years at the Bauhaus as an afterthought, calling it a place where he was "a onetime instructor," to say nothing of the program he later ran at Black Mountain College in North Carolina for sixteen years. Add to this the fact that the "Homage to the Square" series was never exhibited during Albers' lifetime, only rarely after his death and never once before in New York and you get the idea that 'best known' may be a bit of a stretch. I realize that 26 years spent painting more than 2,000 squares is no small effort (The Morgan has about eighty of them), but it seems like a major oversight for this exhibition to discuss "the artist's investigation of form and color" as if for the first time without making the connection to the place where that investigation first began, thirty years earlier in Weimar, Germany, where Albers was a student at the Bauhaus before Walter Gropius asked him to join the faculty in 1923. 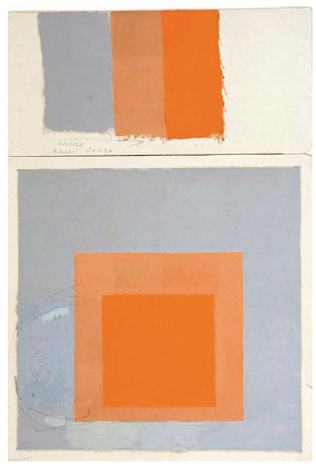 That said, I agree with The Morgan's Director, William M. Griswold, that the museum does an excellent job of exhibiting finished work side by side with evidence of the "artistic process and the often surprising, experimental drafts that lead to a finished work of art." Like the Morgan's previous exhibition of neon artist Dan Flavin's drawings, Albers' sketches "provide important insight into his working methods and, in contrast to the austerity and strict geometry of the finished paintings, these vibrant sketches are remarkable for their freedom and sensuality." They also show just how many hours of sketching and drafting go into what might strike many as simple, straightforward paintings.After frequent trips to Mexico, where Albers and his wife (the phenomenally talented textile artist Anni) fell in love with the colorful art and craft work, Albers broke out of the strict red/yellow/blue Bauhaus palette. He never went as far as blending them together on paper, preferring instead to "investigate the effect of several pure, unmixed colors juxtaposed with one another." True to the rigor of his work ethic, Albers wrote this a friend in September 1947: "Since January [I have painted] only one theme in about seventy studies. What interests me now is how colors change one another according to the proportions and quantities [I use]...I'm especially proud when [I can make] colors lose their identity and become unrecognizable."

Perhaps "Homage to Color" might have been a more appropriate title, especially since Albers made a point of saying, "I'm not paying 'homage to the square.' It's only the dish I serve my craziness about color in."

Josef Albers in America: Painting on Paper Through October 14, 2012