Imagine you're giving a five-minute presentation on industrial design to a crowd of people who have never heard of it. You're asked to show two different versions of the same product, one exemplifying good design, the other exemplifying lousy design, to help the crowd "get it." What objects would you choose? If it were me I'd mention the story of the Jerrycan versus the Allied fuel containers of World War II.

Those two items were designed in the 1930s. What's going on in the design of military gear today? In America we've got the Natick Soldier Systems Center, an R&D center meets design-and-engineering firm focused on military needs. "If a Soldier wears it, eats it, sleeps under it or has it airdropped to them, it is researched and developed on [our] 78-acre campus," explains a Natick press release.

One of Natick's departments is the Load Carriage Prototype Lab, where equipment designers like Rich Landry (pictured up top) create bags and wearable gear holders. A former Pathfinder for the 82nd Airborne Division, Landry recently re-designed the Army's IFAK, or Individual First Aid Kit, bag. The previous iteration of the IFAK was rushed out in 2003 due to sudden military demand and was thus a mere retrofit design of an ammunition pouch. Having carefully studied the unsuitability of the 2003 IFAK—"[it's] just kind of a brick on your side that gets in the way of everything"—and after interviewing soldiers to get feedback, Landry came up with the new design, which he compares to the old in the video below. It's not as stark a difference as with the fuel cans, but Landry's innovative sliding pouch seems a vast improvement. (Although not mentioned in the video, Landry designed it to be slide-able from either side, in case one hand or the other is wounded.)

Landry's gig is an interesting twist on a design job: It demands the cost considerations and design research you'd have to do at any ID firm, but marketing and aesthetic considerations are nil and functionality is everything. And while he doesn't call himself an industrial designer--his official title is the militarily unwieldy Load Carriage Prototype Lab Product Manager Soldier Clothing and Individual Equipment—he sure sounds like one: "[Since childhood] every backpack I got, every piece of equipment I got, was modified in some way, shape or form. That's just how my brain works. Nothing can be left alone. Nothing's perfect in my mind, as far as outdoor equipment, and that's a curse."

The IFAK is expected to be fielded later this summer. 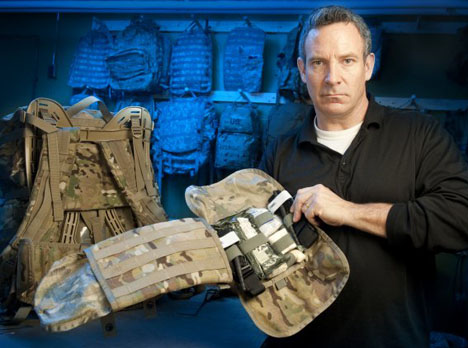