I've been observing the growth of mobile in the developing world for years now, ever since I encountered texting culture on a trip to the Philippines years ago, long before SMS caught on in the United States. Behind a small anecdote like this are big numbers and trends.

A recent post on The Reboot's blog turned me to some great infographics they developed for the World Bank's Information and Communications for Development 2012: Maximizing Mobile report. The report looks at the growth of mobile telephony and data-based services in handheld devices.

Certainly, "World Bank" and "compelling infographics" are two phrases designers rarely think of together, but as Reboot designer Mollie Ruskin noted, visual communication couldn't be more important:We have found that many of our colleagues in the social sector undervalue the role of communications design. This perspective is understandable—when creating a $200 million program to overhaul a nation's water and sanitation system, the significance of fonts and colors and layout can seem quite minor.

Yet this stance has real drawbacks. No matter how well that water program might get put together, its purpose and intentions must still be communicated to a range of audiences: government officials who need to support the program, community members who are asked to participate, and international policy makers who may decide when and how the money is spent. 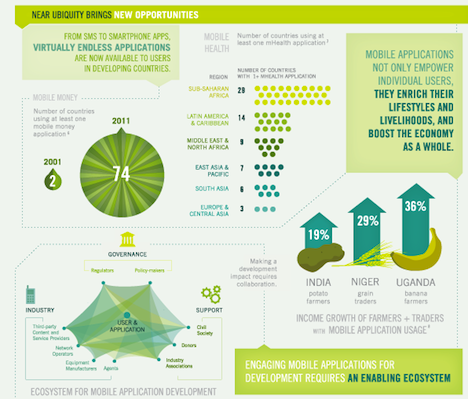 And so it was great to see the new infographics in place, which make big, complex statistics about mobile for development easier to digest and interpret. Take, for instance, the big bold graphic noting that 75% of the world has access to a mobile phone—a staggering number that seems only more likely to grow in the coming years. Or the illustratations of potatoes, grain and bananas, to show the increased income of farmers in India, Niger and Uganda, respectively, thanks to mobile applications.

The biggest callout box is text, beautifully illustrated to drive home a simple point: "The mobile revolution is right at the start of its growth curve." Whether you're a World Bank economist or a freelance designer reading Core77, that's definitely something to think about.