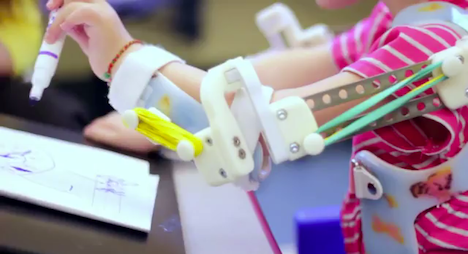 Two-year-old Emma was born with anthrogryposis (AMC), a rare congenital disease that affects muscle strength. At a family conference, Emma's mother learned about the Wilmington Robotic Exoskeleton (WREX), an assistive device made of hinged metal bars and resistance bands that enables people with underdeveloped arms to play and feed themselves.

Tariq Rahman and Whitney Sample of the Nemours/Alfred I. duPont Hospital for Children had created an early prototype of the WREX, that worked for children as young as six. But the device was attached to a wheelchair and some children with AMC, including Emma, had use of their legs. The early version of the WREX was just too large and heavy for a child of Emma's size. 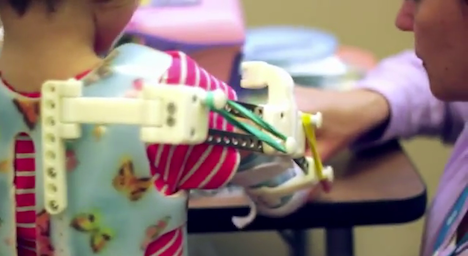 Rahman and Sample found that, with the use of 3D printers, they were able to create a lightweight and flexible working prosthetic for Emma, that is customizable with easily replicated broken parts. The custom exoskeletons are printed in ABS plastic and attached to a plastic vest. Because of the ease of manufacturing, the exoskeleton can grow with the child which makes 3D printing especially exciting for those working in pediatric care.