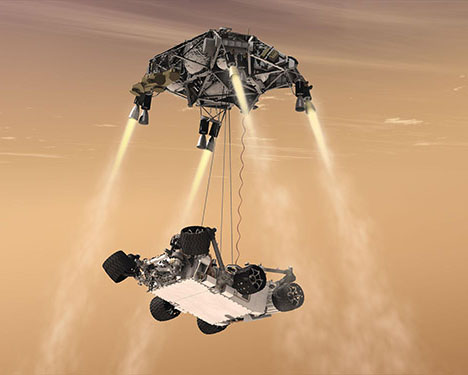 That ID school project where you have to drop an egg off a building in a cardboard structure? NASA engineers could do that in their sleep. Last night many of us were glued to thrilling online coverage of the Curiosity Rover's successful landing on Mars, which brought with it an insane challenge: How do you get a one-ton car, which is traveling 13,000 miles per hour in orbit, safely down to the surface? 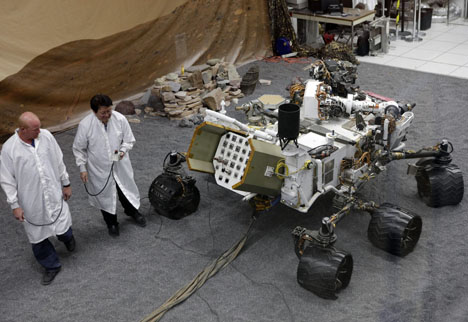 Previous Mars Rovers were small and could be crash-landed within a bubble of airbags, which wouldn't work for the 2,000-pound Curiosity. So NASA's eggheads came up with the following plan, which sounds like something you get fired for suggesting: As the capsule containing the payload enters the atmosphere, thrusters pilot it towards the target landing site while heat shielding prevents it from burning up. Next a parachute deploys to slow the craft down. Then the rover, concealed within a sort of rocket platform, drops away from the capsule. The rocket platform fires up its onboard jets, going into a slow, controlled descent. Then, while hovering over the surface, the rocket platform lowers the Rover to the ground on cables.

NASA informally refers to the procedure as the "Seven Minutes of Terror." A sequence of 79 events all have to be perfectly executed in order for this to work. Mars is some 150-million-plus miles away from Earth, resulting in a worse-than-Skype fourteen-minute communication lag, so it's not like some hyper-caffeinated jockey with a joystick can make last-minute corrections. If one little thing goes wrong, that's $2.6 billion down the drain.

But yeah, they pulled it off. This NASA animation of the landing plan is your must-see video of the week:

And here's what a team of NASA engineers looks like right before they presumably all start doing shots: