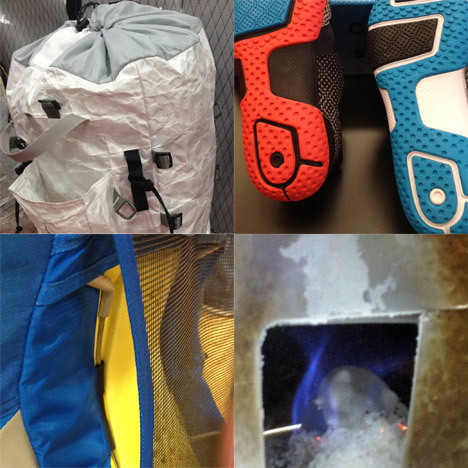 Reporting and photographs by Abe Burmeister

Outdoor Retailer (or OR to most attendees) is one of my favorite tradeshows around, as close to an asshole-free zone as you'll ever find in a business environment. The exhibitors are essentially just a bunch of people who would rather be outdoors, but happen to make a living designing and selling some amazing gear. OR is also something I've always considered Outlier's secret weapon, a hidden world of fabrics most other clothing designers in NY are never to access, to which OR is the gateway. 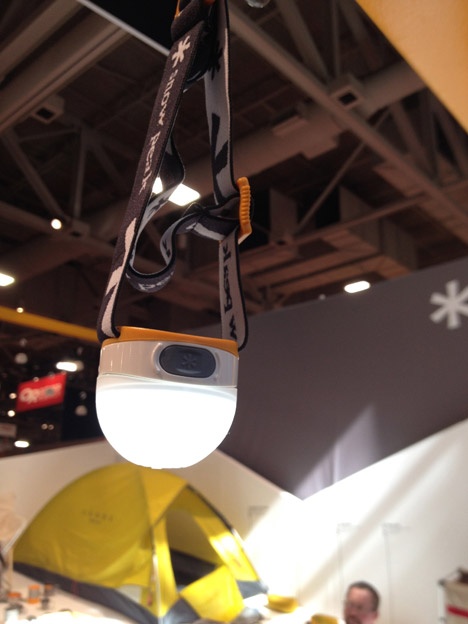 More on this lantern by Snow Peak below...

I spend most ORs behind the scenes in the back rooms of the show, knee-deep in fabric and fittings, but the bulk of the floor is occupied by outdoor vendors selling their latest finished products to their retail network. When Core77 invited us to write it up, I jumped at the chance to check out the fun side of the show. But take it as a caveat as well: this is far from comprehensive round-up, so apologies in advance to any amazing companies I may have overlooked.

Without a doubt, the standout product of the show was BioLite's CampStove backcountry generator. It has nothing to do with them being perhaps the only other Brooklyn-based brand in a backcountry-oriented show. Six years in the making, this combination of wood/scrap burning stove and electric generator is an incredibly thought through and rendered product that hints of even more from Alex Drummond, Jonathan Cedar and the Biolite team. 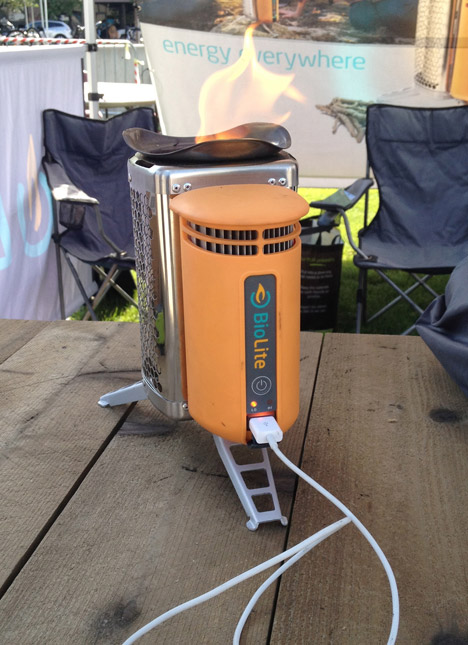 The roots of the stove are in the developing world, where smoke inhalation from wood burning stoves is still a massive health issue. The Biolite CampStove is uses a well-calibrated fan to create a secondary ignition that burns away almost all the harmful emissions of the basic burning wood. In the process, it also generates enough heat to run a small electric generator which can be used to charge the ever-growing array of USB driven outdoor lights and devices.

Perhaps more important than the stove itself is Biolite's hybrid business model (highlighted by Core last year). The CampStove generates revenue from wealthier (on a global scale) consumers, which then can be used to develop less profitable but more impactful products like a larger HomeStove that can both reduce harmful emissions and bring electricity to off-the-grid communities. 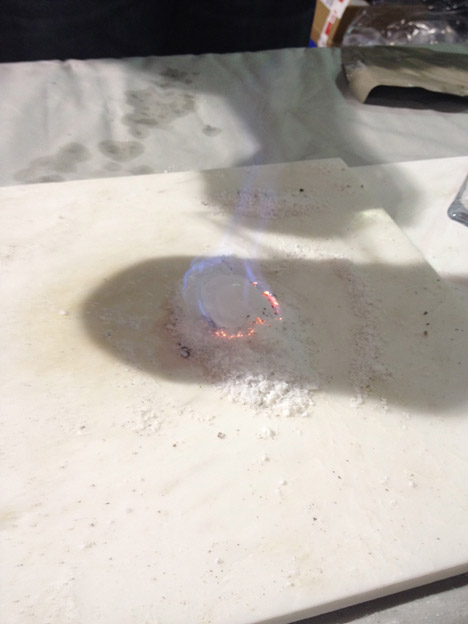 Of course, sometimes being in the backcountry means sometimes even a wood fire isn't possible. Utility Flame is a dead simple solution that the US Military has been using for the past decade and is just now being made for civilians like us. This gel ignites easily, creates a 10–15 minutes of a flame hot enough to boils water in 3.5 minutes. More impressively, it leaves nothing behind except a nontoxic mound of sand. 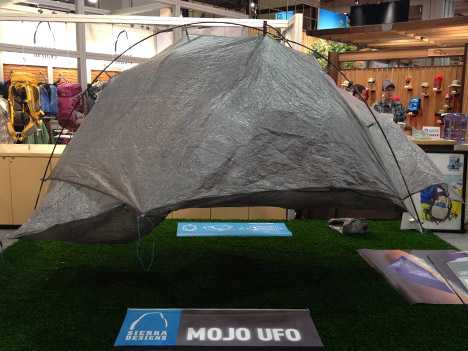 One of the long simmering stories at OR has been nonwoven Dyneema (sometimes called Cuben fiber). This American made fabric is incredibly light, strong and waterproof. It floats on water yet is 15 times strong than steel. It's also expensive and a royal pain in the ass to deal with, meaning only the scrappiest and sharpest young companies have built products with it. This year however the big boys at Sierra Designs jumped into the mix throwing their Mojo UFO tent right in middle of the show floor with plans to release a very limited run next year. It's a big move but as the photos should show it may take a while before they master the particular aesthetics of this unique material. 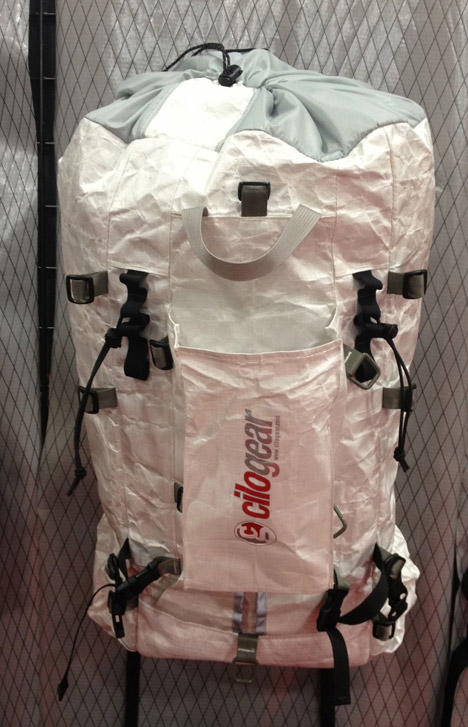 Meanwhile, the two pioneers in the space continue to move forward, each taking quite a different design philosophy in the process. Both built their own production facilities expressly to handle a material alien to most traditional factories. Currently based in Portland, OR (with roots in NYC and Turkey), Graham Williams of CiloGear is the godfather of Dyneema backpacks, building highly-engineered alpinist packs that often find their way to the world's highest peaks. Cilo packs are meticulously thought through for highly specialized tasks, every fabric panel and juncture has been considered and best material (in Graham's opinionated eye) is going to get used, costs be damned. Fittingly, Graham's latest designs—the ones he's willing to show publicly at least—are deeply customized for particular alpinists, something like the Saville Row of hardcore packs. 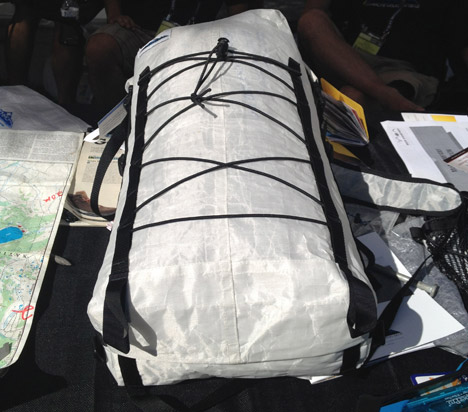 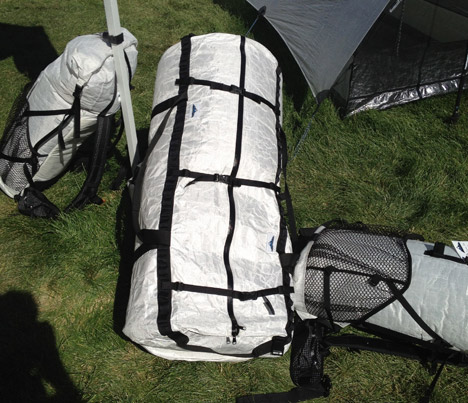 Mike St. Pierre of Hyperlite Mountain Gear, on the other hand, is based in a town just south of the other Portland, tucked away in the splendor of Maine (full disclosure: Outlier produced our Minimal Backpack with Hyperlite). Mike's approach is so minimal and pared back that he doesn't even bother with the indoor show, opting instead to display outdoors in the Tent City zone. Nor does he fuss with the complexity of color: Hyperlite packs come in nothing but a glowing white and extraneous details are tossed swiftly aside in order to create the lightest backcountry experiences possible. The results have a simple elegance for those looking to get fast, light and off the grid. 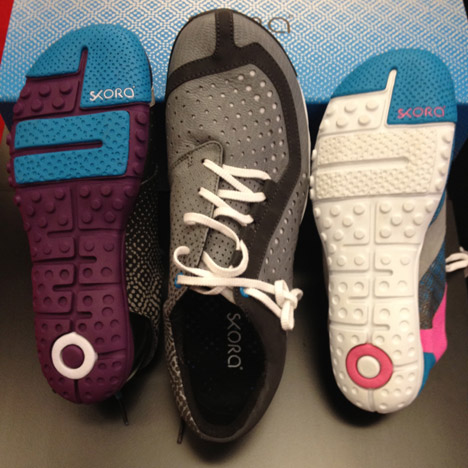 Minimalism, of course, has been the word du jour in the running shoe world for a while now, and it's hard to imagine things can get more minimal than the running sandals of Luna and XeroShoes. Running shoes are a bit out of my expertise, but the most interesting new player was Skora, which seems to treat the minimalist and barefoot running movement as an opening to rethink the running shoe in a completely new form. They appear to be the first company to truly realize that barefoot running isn't really about getting as close to no shoes as possible but about building running shoes suited to a different running motion than the one that has prevailed in the industry for decades. The insoles and outsoles are both completely new designs, but perhaps more important is that they are willing to use higher quality leathers in the uppers: frankly, it's a damn shame it's taken the sneaker industry so long to reach that point. 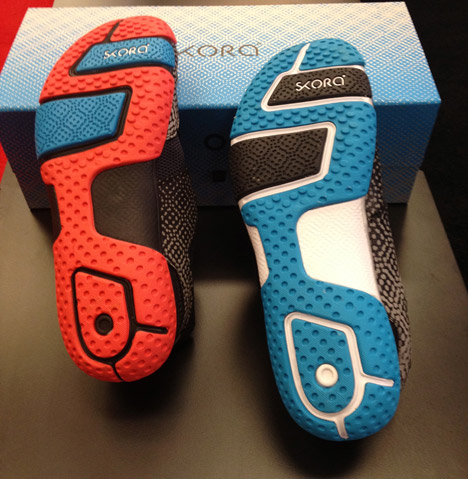 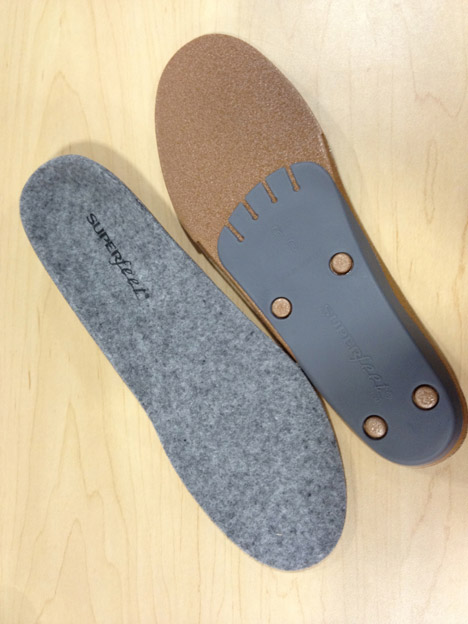 Similarly, it's shocking that it's taken the insole industry so long to release merino-topped insoles, but Superfeet has finally brought the product to market. Anyone who has ever worn merino socks could have told you it should have happened ages ago, but hey we'll take them when we can get them and that finally is now. 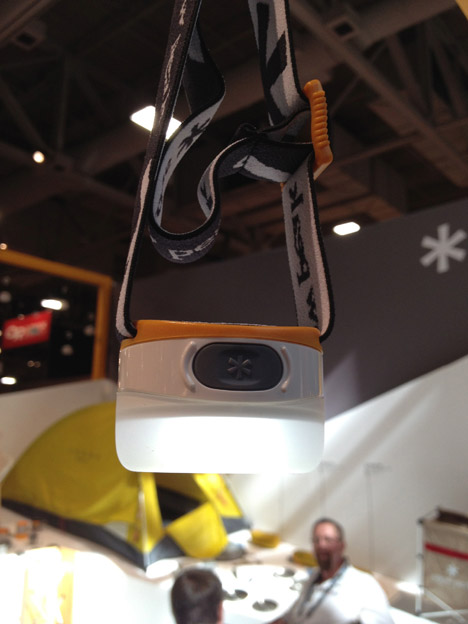 But enough with the 'small revolution' sort of stuff: the best design out there is usually subtle, incremental and as much about craft as anything. There are two booths at OR that I visit without fail. One is Snow Peak, the Japanese outdoor brand that exemplifies everything people love about Japanese design. I first fell in love with them because of their impeccably-crafted Titanium cookwear and utensils. Lately, however, they've been focusing on lighting, creating a series of lanterns, torches and headlamps that perform both on a practical and aesthetic level. 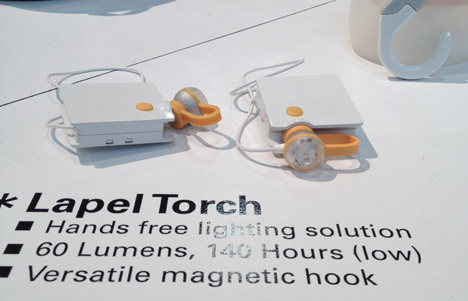 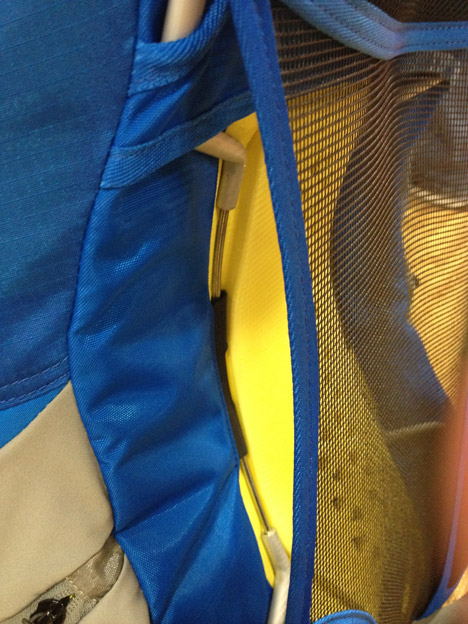 I always drop by designer Tae Kim's (of Alite and Boreas) booth and try and figure out just what he's been up to lately. Like Snow Peak, Tae is a welcome antidote to the extreme backcountry, tallest-peak mentality that infects so many designs at OR. This year, the most impressive detail was the subtle and simple way he reinvented the ventilated suspension backpack. These packs rig a lightweight mesh onto a tensioned frame in order to keep the bulk of the pack off of the user's back. It can be remarkably more comfortable and less sweaty but it's also quite difficult to produce, as the suspension must be sewn in under tension. With Boreas' Bolinas pack, Tae realized that the ventilation/suspension could be made fully adjustable to the user with a simple piece of webbing and a ladderlock. Not only does it add flexibility and prevent the loosening that can occur in traditional suspension packs, but it also simplifies the production process. Elegant, simple and it brings down the price? That's what good design is all about. 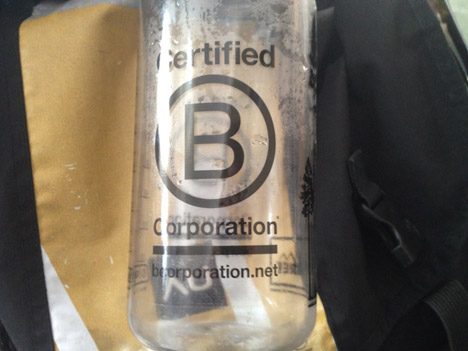 Lastly, I'd like to mention that OR is the first place I met with B-Corp people and I'm not going to let an opportunity to talk about them slip past. What B-Corp is short for Benefit Corporation and it's best looked at as a legal act specifically designed to make corporations healthier on a broad legal and financial spectrum. Outlier is proud to be one of the very first registered B Corporations in New York State—we converted the first day the law went into effect earlier this year. I strongly recommend anyone running a company or thinking about starting one think strongly about incorporating as a B Corp.