The Unsung Cyclists of the 2012 Olympics 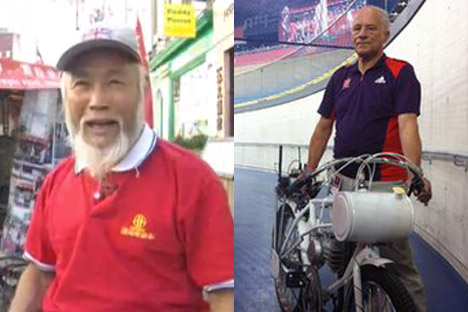 Images above via BBC

The Olympics may be over, but additional analysis and commentary is sure to follow for the next couple weeks as the events linger in our memories of Summer 2012. I, for one, was curious to learn about a couple of older bike-bound fellows who turned up with nary a chance to podium. Chen Guanming and Peter Deary each have some 20 years on road race winner Alexander Vinokourov, an elder statesman of the sport at 38 years old, and their combined age comes in at five times that of Jason Kenny, who won gold for the host country in a breathtaking contest for individual sprint.

Of course, their stories could not be more different. Chen's tale is almost too good to be true (if the BBC clip didn't include shots of his passport, I'd be even more skeptical): "In two years Chen Guan Ming has travelled about 60,000km through 16 countries, overcoming floods, war zones, mountain passes and temperatures of -30°C," hoping to "spread the Olympic spirit." The Guardian reports that, Chen said he had been inspired in 2008 by the London mayor, Boris Johnson, accepting the Olympic flag inside the Bird's nest stadium in Beijing during the closing ceremony, he told the BBC, which showed footage of his passport full of visas for various countries along his route.

He was denied a visa to Burma so cycled through the mountains of Tibet instead, he said. 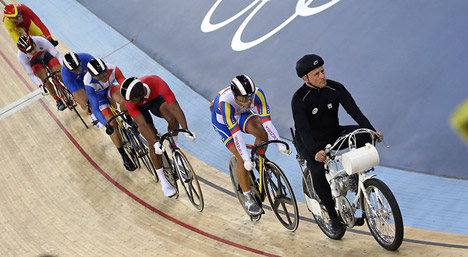 Deary's story, on the other hand, is essentially the inverse of the Chinese folk hero. Where Chen's epic journey took him halfway across the world, the pace car pilot (known as a derny) all but defines the mundane opening laps of the Keirin race. The New York Times reports:The keirin originated in Japan, where fans bet on the races, and was added to the Olympics in 2000. It is a dynamic event run at blazing speed with many crashes. But its early stages are much more pedestrian.

Deary's appearance is somewhat discordant in an Olympics celebrating fit bodies and high technology. His cycle looks more like the one ridden by the Wicked Witch of the West than a track racer's sleek model. His pedaling speed is glacial. His attire is all black, with a decidedly nonaerodynamic helmet. But most remarked upon is his demeanor: absolutely expressionless.

The former cycling coach from Manchester notes that consistency is key: "Deary manually controls the bike's speed, following a strict regimen, increasing it by a few more miles per hour each lap, beginning about 15 m.p.h., and eventually hitting 30."

Of course, there's enough glory to go around, and the human side of the Olympics—as opposed to the superhuman feats of the athletes themselves—is precisely why we find these events so interesting. There's certainly an element of irony to pairing of the two wildly disparate tales, but the event that brings them together remains remarkably unironic in its significance. (The BBC has more on the tireless individuals who operated behind-the-scenes to the games running smoothly.)