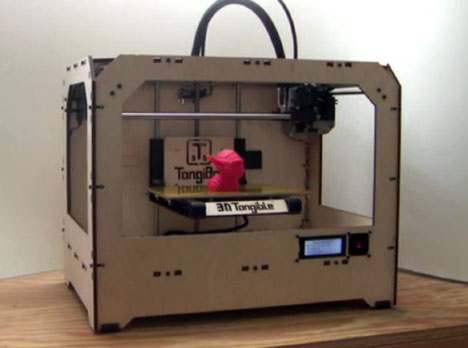 Engineer Matt Strong has generated strong controversy in recent days. Here's why: he's cloned the MakerBot Replicator, dubbed his version the TangiBot, and thrown it up on Kickstarter. His intent is to start his own "world class" company by undercutting MakerBot on price by about a third. In Strong's words:Just to be clear, there is nothing illegal, sneaky or underhanded going on here. Everything is legal and fair. Makerbot also used other people's open source designs when they created their business. This is simply the way open source designs work. Welcome to the world of open source.

First thing to jump out at us: it's an option to pay MakerBot for licensing rights to use their name. Strong mentions he's opted not to. However, he uses the word "MakerBot" 23 times in his written Kickstarter pitch.

That seems like a bit much to us, but the other issues are less clear-cut. Commentary on Strong's Kickstarter page has been robust, with some taking him to task and others in strong support. One commenter says doing a part-by-part design knockoff is shameful; Strong claims he's made unspecified manufacturing improvements. Others are lambasting MakerBot and accusing them of price gouging. Still others veer into personal territory, accusing Strong of not having the requisite amount of passion to be a valid member of the digital manufacturing community.

Strong has kept a cool head and gamely answered with lengthy responses, even as the comments continue to pile in. Some have questioned his ability to deliver, which doesn't seem quite fair to us. On the other hand, another commenter has repeatedly asked technically specific questions that Strong never outright addresses, instead deflecting them with answers that incorporate mention of quasi-relevant personal hardships he has undergone. (I find that's usually not a good sign, but that is my personal opinion.) Other question marks appear when you find the link to his resume abruptly went dead after a commenter had some questions about a company listed on there.

All of those things could be explained away by Strong, and I can't call any of them damning; but the spirited and ongoing debate on that comments page does not appear to be helping his cause. At press time he had about $15,000 towards a $500,000 target with 24 days to go. Hanging in the balance is the possibility of a less expensive 3D printer, and the results of a community-wide debate on what "open source" really means.

We highly recommend you read the actual comments and decide for yourself here.

(Note: This post has been revised by removing a quote incorrectly attributed to Strong that was in fact made by a commenter. Our apologies for any confusion caused by the misattribution.)