Airpod, the Car That Runs on Air

With gas prices rising and the massive drought making ethanol a tough sell as a gas alternative, India's Tata Motors has hit on the perfect time to debut the Airpod, a small urban vehicle that, as its name suggests, runs on air. If you don't know much about how regular cars use fuel, natural gas or, alternatively, hydrogen is compressed in a pressurized tank, hence the 'pssf' sound when you unscrew the gas cap. Now think about air rifles. If you had the bad luck to grow up with an older brother obsessed with using you as a target (or perhaps you were that older sibling yourself), you know that the air we breathe seems harmless enough, but when compressed it packs a punch. A gun is one thing, but is it enough of a punch to power a car?

Tata thinks so. They enlisted the help of MDI, an engineering company that's been developing zero pollution engines since the early 90s. The Airpod has a 175 liter storage tank of compressed air that you refill with an external pump or with an electric motor that can 'refuel' the car while its in motion. This first model reaches a top speed of 43 mph (70 km/h), making it best suited for transporting people or small goods around city streets. One tank lasts over 125 miles (200 km) and takes only two minutes to fill up again at an average price of just one euro per fill. 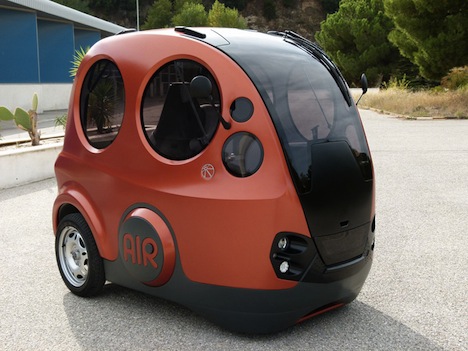 The Airpod has three seats for adults plus a smaller fourth seat for a child. There's even room for luggage. It only has three wheels, two doors and no steering wheel. Instead, you drive it with a joystick. MDI has the public and service sector in mind, naming runners, messengers and artisans as its target market. The Airpod, which is currently in its second phase of testing, is just one of five models MDI is developing. They're also working on a truck, sedan, convertible and bus version. Tata and MDI expects to release the Airpod commercially in the near future for $10,000. 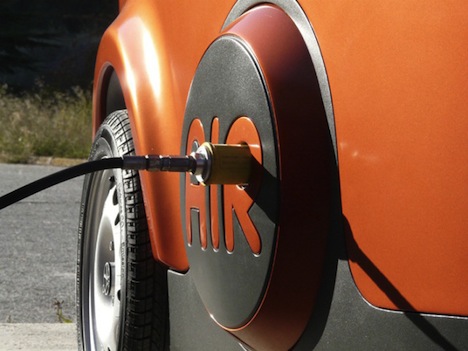 Check out the video after the jump...

Airpod, the Car That Runs on Air