The One Handed Condom Wrapper: An "Extreme-User" Story 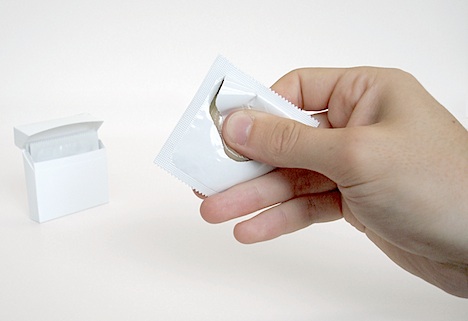 Man and condom have been locked in a bitter struggle of begrudging codependency since the beginning of time (or sometime in the 1920's). Latex may have got tougher, lubricant may have got lubricantier, but we have seen surprisingly little noteworthy product or packaging innovation, short of the occasional rubbery ridge or a mildly disconcerting flavouring.

'The One Handed Condom Wrapper'—brainchild of London based designer Ben Pawle—could be the long awaited answer to fumbling lovers' cries across the globe, and is, perhaps, the biggest coup for seamless love making since the days of bra burning.

Taking aim at the impractical impenetrability of contemporary condom packaging, Ben's foil wrapper redesign imagines the contraceptive being applied with the use of a single hand—opened, quite literally, with a click of the fingers. (Check out his video after the jump)Interestingly, Ben's concept was not the result of a sudden flash of designerly inspiration, nor was there (we are sure he would be keen to add) any Eureka moment following awkward personal experiences. The easy open condom wrapper was, in fact, one outcome of a lengthy user research project at the Glasgow School of Art, exploring the difficulties faced by semi-parlysed hemiplegics and is, perhaps, an archetypal example of how insights gleaned from the experiences of 'extreme users' can inform innovation for the mass market.

Ben admits his concept still needs some serious development and detailing before we see it on pharmacy shelves, but reflects on the value of his work lying largely in the strategic and conceptual "crafting of experiences" that can lead to future product developments.

Ben's prototype will be on show at the V&A during the upcoming London Design Festival, as part of a showcase of progressive British design.

The One Handed Condom Wrapper: An "Extreme-User" Story