Watch and Learn: There's More Than One Way to Additively Manufacture a Metal

Earlier this week, when I posted a video about 3D-printed bike parts, I was simply too excited about the prospect of digitally fabricating dropouts to concern myself with the technology behind the collaboration between Charge Bikes and EADS. Commenter Modul called me out on my lack of due diligence, piquing my interest in a process known as DMLS, short for Direct Metal Laser Sintering. Had I done my research, I might have dug up commenter Lori Hobson's mention of "DMLS, a process for METAL, even titanium!!!"... in response to a 2008 (!) post on rapid prototyping. (Just a friendly reminder that we welcome and value constructive comments from our readers!) 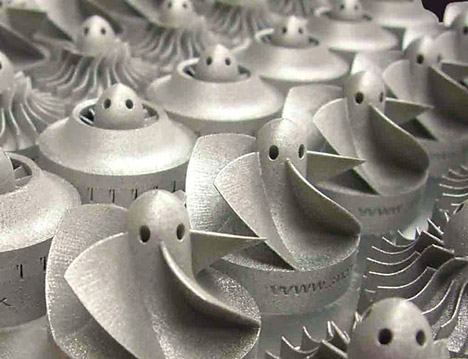 It turns out that Hobson, at the time, was at product development consultancy MindTribe, and she'd recently learned about the process herself. Frankly, her lengthy March 2008 blog post is a pitch-perfect introduction to the process, and I'd recommend it for anyone who needs a primer. 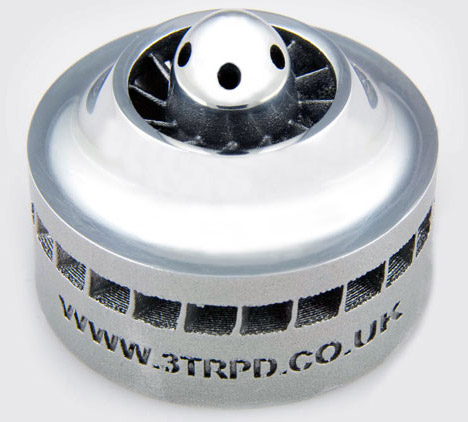 Which brings us to 3T RPD, who provided the images in Hobson's post (reproduced here). The UK-based additive manufacturing outfit that has been the country's largest SLS (plastic 3D printing) provider for over a decade. They recognized the potential of DMLS early on and are currently the major provider of metal AM since their first foray into DMLS in 2007. Their site has further details on DMLS for prospective clients, including a quasi-archaelogical video, as well as case studies. 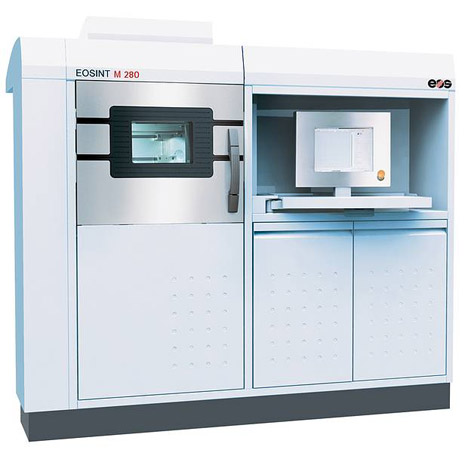 As 3T RPD notes, the EOS M270/280 is more or less the industry standard for DMLS machines... at least to the extent that they've made their way stateside. We'd direct U.S. clients to SoCal's Forecast3D or Illinois-based GPI Prototype to get their metals directly laser-sintered. For those of you who prefer a bit of faux-drama for your edification, the latter produced a "Super Cheesy but Funny Video on Direct Metal Laser Sintering for Rapid Prototype and Additive Manufacturing":

Indeed, a more recent (and recommended) survey of 3D Metal Printing indicates that:According to several reports, it is clear that European design and manufacturing firms are more advanced at both creating and utilizing additive technologies than their US counterparts (especially in the medical and dental arenas). And firms such as Boeing, Airbus, and even NASA are already using systems from the likes of EOS and Arcam.

Where Munich-based EOS specializes in DMLS, Sweden's Arcam is the current leader in Electron Beam Melting, or EBM, which is explained more or less in full in the informative CGI above. For reference, an in-depth comparison of the two processes can be found here, and Arcam has done well to post a comprehensive company profile on YouTube. Unfortunately, videos of actual EBMing are, well, kinda trippy to say the least: it's hard to tell what, exactly, is going on amid the roving sci-fi lasers and crazy disco shimmering. Take a look:

(Another clip juxtaposes factual stills with the mesmerizing, if largely incomprehensible, EBM footage.) 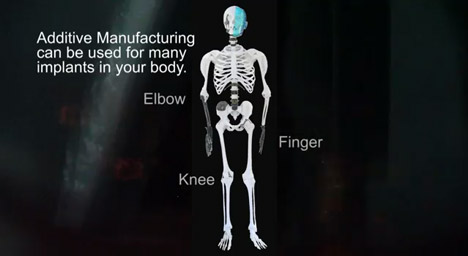 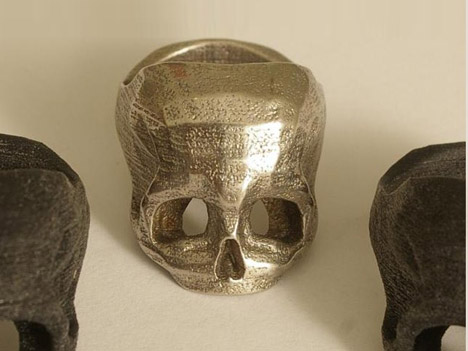 Efficient though they may be, neither DMLS nor EBM comes cheap... which is where binder-based metal AM comes into play. This is closer to a narrow definition of 3D printing—i.e. Z Corporation's inkjet technology, as seen in this now-classic video. As far as I can tell, this manufacturing method is generically known as 3D metal printing:

The very same seahorse door handle appears in a (different) video on Shapeways' site, to provide a bit of background information about their stainless steel 3D-printing services. In fact, our own Rob Blinn called on the NYC 'personal production' company to prototype GothamSmith's ever-popular cufflinks. 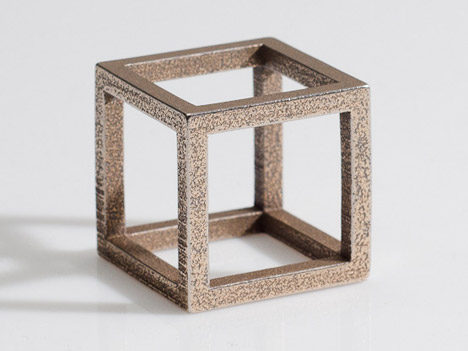 Several companies offer this variation of binder-based 3D printing, including Belgian makers i.materialise (who posted the above video) and Ponoko, who provide a nice step-by-step description of the process:1) 3D printing in stainless steel - A ProMetal 3D printing machine uses an inkjet head to deposit an organic binder onto a stainless steel powder surface. Each layer of powder is adhered in succession until an object is formed. After the printing has finished the object is placed in an oven to cure the binder. 2) Infusion - Objects are taken from the ProMetal 3D printing chamber and excess stainless steel powder is removed. These objects are then transfered into a furnace container with bronze. This is heated in a furnace at a high temperature to infuse the bronze into the porous stainless steel objects. This produces a solid metal object that is a hybrid of stainless steel and bronze. 3) Finishing - The object is bead blasted to smooth the surface after the infusing process. 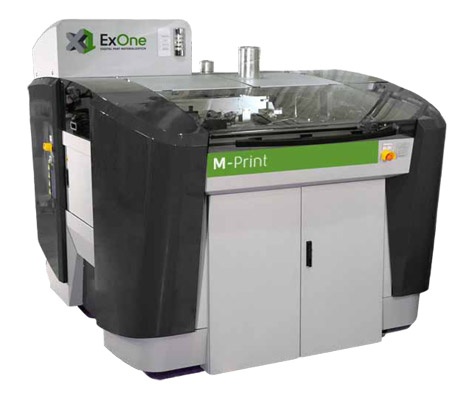 Earlier this year, Pennsylvania-based ProMetal relaunched as ExOne, consummating their earlier plans to restructure c. 2010. Nevertheless, it looks like the on-demand companies have older versions of their flagship M-Print machine, which is also shown in this lo-fi video about the original company, ProMetal.

The linked video was posted by a UK-based AM consultancy called Econolyst, who also posted a video about Selective Laser Melting, a.k.a. DMLS, and its commercial potential at the same time, back in 2008. Thus, this interview with MCP's soft-spoken Bob Bennett preceded the MindTribe piece by a couple of years:

In addition to the embedded shorts, Econolyst also has a video interview with Arcam on EBM, as well as similar clips on RP technologies from SLS and SLA to Direct Metal Deposition and a process known as "laser cusing." While we have to surmise that a media manager simply saw fit to upload all of the videos on that fateful day in March 2008, we're assuming that the videos were produced within the few months prior, just under five years ago... which makes the series an interesting snapshot of metal AM technology at the time. 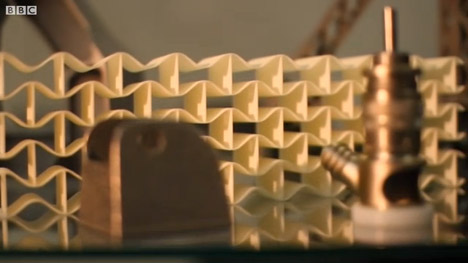 Last but not least, it's worth checking out this BBC news item about EADS's 3D printed (plastic) bicycle (the same folks who DMLSed the dropouts for Charge Bikes, if you've lost track of the myriad company names and acronyms.) I must admit that I was interested to see that engineers Chris Turner and Andy Hawkins cite the bicycle as an object that anyone would recognize, as the result looks like a cross between Graeme Obree's "Old Faithful" and a Moulton F-frame. In any case, fellow bike/fabrication nerds can view a longer (albeit lower quality), 10-minute 'directors cut' on YouTube courtesy of Brompton. 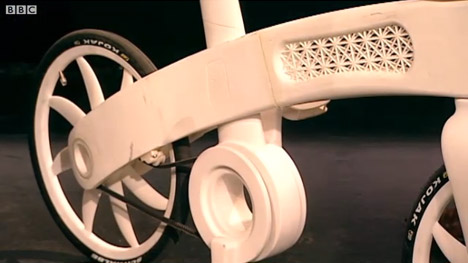 Again, we welcome reader input in the comments... any recommendations for other metal AM innovations, services or companies that we should check out?

Watch and Learn: There's More Than One Way to Additively Manufacture a Metal