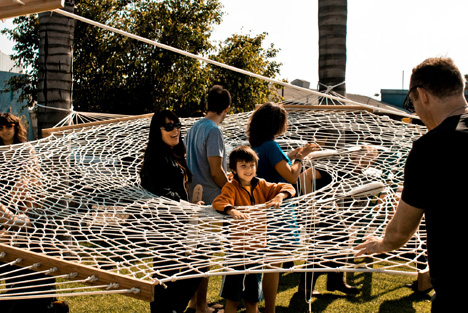 Last May, Los Angeles-based co-op fabrication shop, Knowhow Shop, revved up my summer dreaming by creating a six-sided hammock at Bergamot Station's People's Park, a small patch of green space surrounded by concrete parking in Santa Monica. Now, they were kind enough to clue me in on how their fun, experimental workshop all turned out.

Produced by the Santa Monica Museum of Art (SMMoA), the community workshop attracted about fifty people all ready to put their knotting skills to work. Though Knowhow Shop built a smaller model (which you can see in this previous Core77 post), the actual version was larger and took two hours longer than their expected three-hour workshop. "The workshop was from 2-5PM and we stayed until 7PM or so to put the finishing touches on it," said Kagan Taylor of Knowhow Shop, "but it was done enough for everyone to relax on it by the end."

Knowhow Shop shared this video of the day's goings-on and I was struck by the amount of thoughtful preparation team went through. They had prepared extra-large lasercut shuttles that included pictographs of knots to help attendees remember that knots they had just practiced.

Not only did attendees learn about knots, they actually got to create one full-scale project that literally brought them closer together. As the video progresses, you can see the wide maw of the six-sided hammock dwindle into a tiny hole that surrounded all the workshoppers. That's bonding if ever I saw it. A hot knife purchased from Eagle Rock rope supplier Frank Ferris and Co. finishes off the piece and ensures no loose ends. 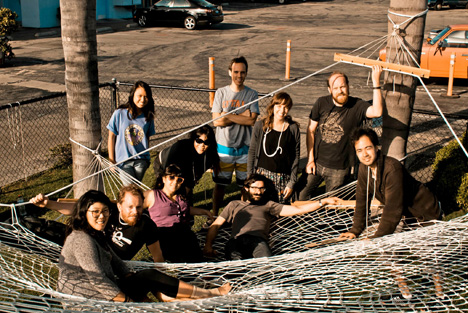 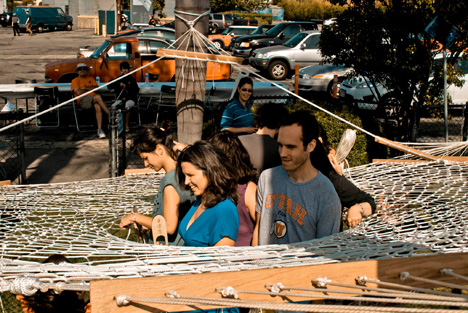 The six-sided hammock experiment was a success and you can see attendees making sure they enjoyed the fruits of their labor. They weren't the only ones to laze around the hammock. The next week after the workshop, Taylor and Justin Rice returned to find about five people lounging on their mutant creation. When asked how they had heard about it, they replied "We're the hammock appreciation club of San Francisco and we drove all the way down to lay in the hammock!" Of course, that proved a prank (they were actually there to attend a Buddhist lecture), but what a delicious truth it could have been. 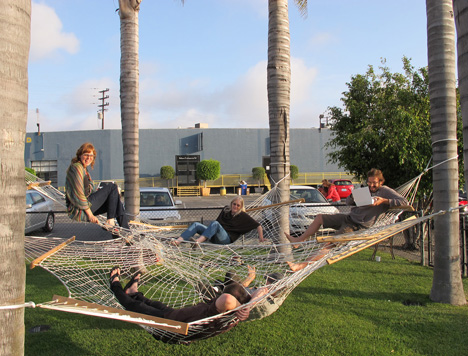 The "Hammock Appreciation Club" as photographed by Justin Rice.

Knowhow Shop tells us that SMMoA still breaks out the hammock during public events so check out SMMoA's twitter to find out when it'll be out!